And it's because of the endearing talents of star Geraldine Viswanathan. 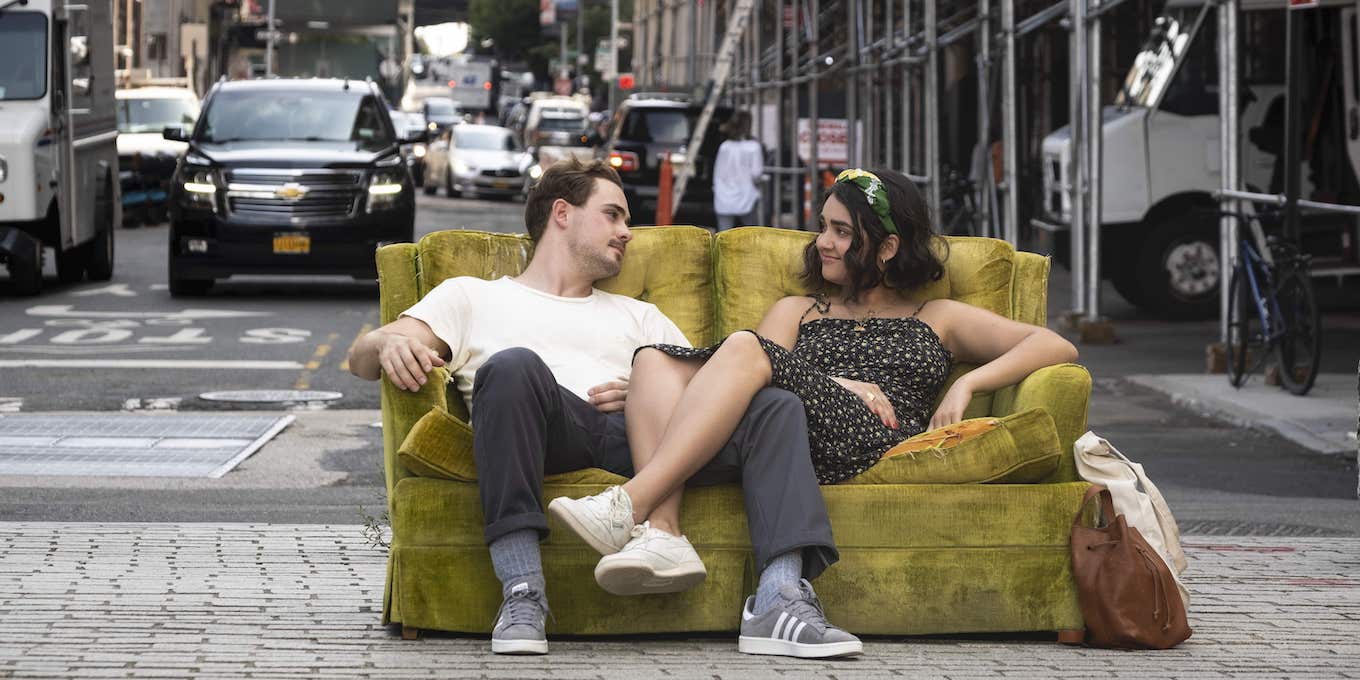 Dacre Montgomery and Geraldine Viswanathan in The Broken Hearts Gallery

For women of a certain age (read: born in the second half of the ’90s), a particular group of celebs were once considered to be the pinnacle of fame. “I was such a Disney kid. I was just obsessed with Selena, Demi, Miley, all of them,” 25-year-old Australian Geraldine Viswanathan tells us over the phone. Now, things are coming around full circle for the actor: Her new movie, charming romcom The Broken Hearts Gallery, just so happens to be executive-produced by Selena Gomez. “It is so surreal,” Viswanathan says. “Selena is super inspiring and one of the most influential people in the world. It is so bizarre that she even knows who I am. If I went back in time and told my 14-year-old self that this was happening, I think she’d just punch me in the face.”

For anyone who is at all familiar with Viswanathan’s work – she broke out in North America with her scene-stealing performance in 2018’s laugh-out-loud flick Blockers and has since gone on to star opposite Daniel Radcliffe in comedy series Miracle Workers and alongside Hugh Jackman in the inspired-by-true-events drama Bad Education – it’s no surprise that one of the world’s biggest celebs knows who she is. Regardless of the role, the Aussie has a can’t-look-away-from on-screen presence, and it’s immediately obvious she has the makings of a huge star.

The Broken Hearts Gallery, out in select theatres today (where public officials have deemed it safe), is no exception. Viswanathan stars as Lucy, a young woman who tends to hold on to physical objects from past relationships and experiences a bit too long (she’s basically a hoarder). After her most recent heartbreak, she’s inspired to start a gallery where people can leave trinkets from their own relationships in the lobby of her new friend’s (Stranger Things’ Dacre Montgomery) work-in-progress hotel. It is the quintessential summer romcom that is, unfortunately, coming later than planned. But rest assured: It was worth the wait.

Why The Broken Hearts Gallery?

Initially, when I read the script, I just felt like it was such a fresh, funny romantic comedy. I thought it was really sweet and I fell in love with Lucy. She’s so inspiring because she wears her heart on her sleeve and feels her emotions so fully and loudly. That takes a lot of bravery. She has this very girlish power and strength. I was like, “Wow, who is this girl?”

And then I met with [writer-director] Natalie Krinsky and quickly found out that Natalie is that girl. She is so smart and wise and outrageously hilarious, and she put so much of her own essence and mid-20s energy into Lucy. We had a FaceTime chat and we were talking about the script but then very quickly went to my personal life and she was helping me with my own life. We just had this connection and I knew we were going to be friends. From then on, I was on board.

How does forming an instant connection like that help during the actual creation of the movie?

It makes such a difference. She’s lived with this script for 10 years and so much of this film is about Lucy and her story. Natalie made it very clear to me from day one that this is a collaboration between the two of us. That takes a lot of humility from a director. It really ended up being one of the most creatively rewarding and satisfying experiences I’ve had because she was so open. Natalie and I would be rewriting things together in rehearsals or on the day, we would talk in-depth about everything. I felt so safe and supported because she emboldened me. It was really special.

In an Instagram post, you called Lucy unhinged, which made me laugh because it felt true. It’s not in a bad way, but she’s someone who is so comfortable with herself at all times – like she is always with her best friends. Is that something you connected to?

I was also very inspired by that. She takes being unapologetically herself to another level. We all try to maintain some kind of level of cool where we maybe don’t say how we feel or hide ourselves a little bit. Lucy just doesn’t do that. She is honest and relentless in her expression of herself. I’m usually pretty comfortable – I’m a terrible liar and it’s impossible for me not to be honest, so I definitely related to Lucy in that way.

We don’t often see women of colour fronting a romantic comedy, and you’ve talked about how this movie doesn’t make a big deal out of being more diverse than we’re typically used to seeing. Why was that something you appreciated?

The way Lucy was written was so that it didn’t matter. I think if this movie had been made maybe five, 10 years ago, the default would have been to cast a white girl because that what’s always been done. It’s not something I think about consciously all the time, but I’ve been pretty fortunate so far in my career because I’m often able to play a young girl in America who just happens to be a woman of colour. It doesn’t have to be explained. I think it’s a testament to Natalie and the people behind this movie that it doesn’t have to be talked about. My mom in this movie is white and she looks exactly like my mom in real life. It’s a sign of sophistication and trusting your audience that [they didn’t feel the need] to explain why Lucy is Brown and her mom is white. It’s just a normal thing.

What are some of your favourite romcoms?

My number one favourite is Bridget Jones’s Diary. It’s so charming and she’s so completely relatable. I can never get tired of watching that movie. And Hugh Grant is the hottest person in the world to me.