Meet the new generation of look-at-me dressers that have taken celebrity style to a whole other level. 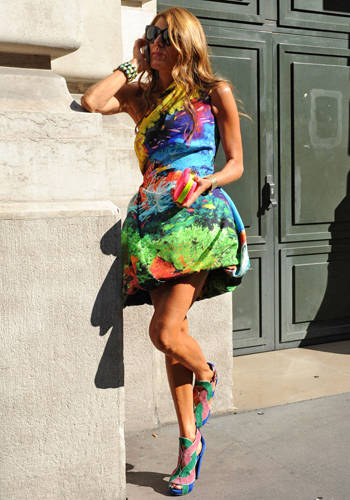 Several weeks into the awards show season and you start to wonder just how many sequined mermaid gowns can a girl take? The designer confections you see on the red carpet are lovely and glamorous but conventional, safe and certainly nothing that raises eyebrows or even relishes the thought. How weirdly wonderful it is then to see a new group of women who are willing to transcend trends and dream outside the box. By embracing the odd, ugly, and over-the-top, they force us to ponder on our very own willingness to push the envelope and act out the sartorial desires well hidden within the recesses of our minds. Here, then we salute the spirited new fashion style setters bravely standing out in a sea of sameness.

Gaga may have been born this way but Ms. Minaj and her madcap sartorial statements appear to spring fully formed from the Internet. Whether it’s a brightly coloured surgical mask, neon puffball tunic or pink-and-yellow streaked wig, hip-hop’s newly minted queen brings that same eclectic mix as Lady Gaga before her, scooping up countless coveted magazine covers and makeup contracts along the way.

It’s a wonder that either of these veteran Italian editors ever reach their front row seats at Fashion Week, given the number of fashion bloggers and street style-seekers who stop them outside all the shows they attend. While Piaggi, a writer who has produced more than 7,000 editorial pages for the most prestigious fashion magazines, is more prone to colour and clash (not to mention a penchant for blue hair), ADR (as she is affectionately known) of
Vogue Nippon does keep an equally outsized closet filled with couture confections and outrageous hats, as well as sharing a habit of never wearing the same outfit twice.

More new fashion style mavons who have rebelled against traditional celebrity style, on the next page…

Like the late Isabella Blow, her devoted friend and fellow Alexander McQueen muse, Guinness belongs to a rare group of women who can conduct entire conversations with their style. In the wake of Blow’s suicide five years ago, when the executors of her estate were forced to put her clothes up for auction, Guinness halted the auction plans by purchasing the entire lot privately, thereby symbolically inheriting the title of fashion’s reigning eccentric icon. These days, the British brewing heiress emerges in high-collared
couture confections, vertiginous heels and giant diamonds to offset her skunk-like black-and-white striped mane piled high atop her head. But, more critically, Guiness is viewed as a modern pied piper of fashion, acting as a stylistic champion for fledgling fashion designers like Gareth Pugh and experimenting in countless creative projects including an eponymous fragrance with Comme des Garçons, a fine jewellery line with Shaun Leane, a cosmetics collection with MAC and an exhibition of her personal wardrobe at the Fashion Institute of Technology in New York that opened this past fall, featuring extraordinary pieces from the likes of Azzedine Alaia, Karl Lagerfeld, John Galliano, and, of course, her beloved McQueen. As FIT’s Valerie Steele said, “With Daphne, she does not just dress for special occasions — every day is an event.”

Who’s that girl, you ask? You may not know her by name, but with her surrealist headpieces, Geisha-inspired maquillage and decadent vintage pieces, Harper is hard to miss. The New York-bred philanthropist and front row fixture is a fashion star in the making and like that other blue blooded deb before her, Little Edie, Harper has a love-it-or-loathe it fashion point of view who chooses to dress to her own drumbeat.

Who can forget Bjork and her infamous swan dress? The look skyrocketed to iconicity the moment the Icelandic songstress hit the Oscar red carpet in over a decade ago, so it’s with open arms that we welcome another rare bird.
Tilda Swinton has been quietly blazing a trail in charismatic supporting ensembles by insider-y labels like Jil Sander and Haider Ackermann. At a time when celebs employ a battalion of stylists to help achieve a bland perfection that passes for good taste, we applaud such fearlessness and audacious originality.