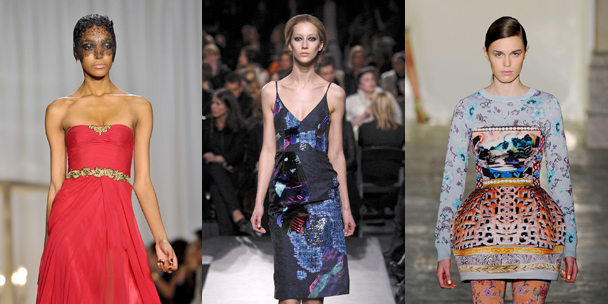 There will always be a place for Valentinos, Versaces and Armanis on the red carpet but lately the most common response to “Who are you wearing?” isn’t nearly as common. A new group of rising stars of the fashion world have created quite a
celebrity following and while you may not necessarily recognize the names, we’re sure you have seen them stealing the spotlight at the latest premieres, parties and awards shows. Here, we reveal who Hollywood’s glamour girls have on their speed dial.

New York-based Prabal Gurung’s spectacular trajectory is due, in no small part, to Twitter. Born in Singapore and raised in Kathmandu, Nepal, Gurung did stints at Donna Karan, Cynthia Rowley and was design director at Bill Blass before launching his eponymous label in 2009. His debut was well received and snapped up by Michelle Obama but it was a Tweet from Demi Moore that made Hollywood flock to Gurung. @MrsKutcher, Carey Mulligan, Zoe Saldana and Amanda Seyfried are just some of his rapturous fans, while Sarah Jessica Parker, who sported his collection almost exclusively for the I
Don’t Know How She Does It press tour, wears his innovative designs so often that people are beginning to question whether she is an undercover brand ambassador. No surprise here that Gurung scooped up the 2011 CFDA Swarovski Award for Womenswear.

Since his vibrant, lace- and flower-strewn breakthrough collection for fall 2009, this Turkish-Anglophile designer from Montreal has been touted as Britain’s answer to Christian Lacroix. Hollywood’s most famous faces — think, Michelle Williams, Anne Hathaway, Jessica Biel, Lea Michele and more than one Olsen sister — are among his loyal fans but it’s one royal fan in particular that catapulted him to stratospheric highs. When HRH Catherine, the Duchess of Cambridge touched down in Canada last summer sporting the
designer’s navy lace sheath, and again a few days later in a sapphire frock, in a snap Erdem became one of the hottest red carpet ready designers.

Another favourite of the
Miss Middleton, London-based Packham has quickly gone from royal insider to red carpet elite, dressing Hollywood heavy-hitters like Angelina Jolie, Kate Beckinsale, Kate Winslet, Sofia Vergara, and Taylor Swift. With her Grecian draping, decadent embroidery and show-stopping sparkle, it is no wonder fashion insiders are tipping the label to be the next Marchesa.

When one of
fashion’s most photographed women — who has the creamiest pick of what designers have to offer — wears a dress from your runway debut to New York fashion week, it’s an auspicious star. Such was the case with Mary Katrantzou, who happened to spot J
apanese Vogue editor and street style darling on the
Sartorlialist blog in one of the perfume bottle dresses from her Fall 2009 collection. The Greek-born, London-based designer has become a red carpet favourite ever since, with her signature digital prints turning up on the backs of starlets like Keira Knightley, Hailee Steinfeld, Leelee Sobieski and
Glee’s Dianna Agron. Not ready for her print power head-to-toe? Katrantzou recently released a collaboration of patterned bags with Longchamp.

The Parisian couture house was launched in the middle part of the last century and has been reborn as a powerhouse ready-to-wear line under the creative directorship of Guillaume Henry who took the reins in 2009. His effortless little confections, designed with just the right dose of Parisian chic, have attracted a bevy of A-list beauties including Blake Lively, Emma Watson and London’s ultimate It-girl Alexa Chung, who admitted in a recent interview it’s currently the brand she would choose to wear head to toe.

Which designer has captured the affection of the First Lady and a former girl group graduate who’s broken into the fashion world, on the next page...
Red carpet fashion designers: Jason Wu

The previously all-but-unknown designer’s rise has been fairly meteoric, thanks, of course, to First Lady Michelle Obama, but Vancouver-raised, New York-based Jason Wu has continued to awe the industry with his polished, preternaturally
ladylike looks. Emma Stone, Diane Kruger, Leighton Meester and Natalie Portman are just some of the chic starlets who regularly step out in his frocks and who can forget the stunning velvet sapphire number Michelle Williams wore to collect her Golden Globe.

No emerging red carpet designer report would be complete without mention of the former Posh Spice. When Beckham launched her eponymous collection in 2009, she drew sneers and eye rolls but won over the fashion critics and famous faces alike with rigorous construction, luxe detailing and a ridiculously flattering silhouette. Cameron Diaz, Heidi Klum, Gisele Bundchen, Gwyneth Paltrow and Jennifer Hudson are just a few of the sublime bodies who can’t get enough of Beckham’s signature body-loving hourglass dresses and just a few years in, she’s certainly established herself as a red-carpet expert.