Discover the fashion designers the stars (and royalty) love to wear. 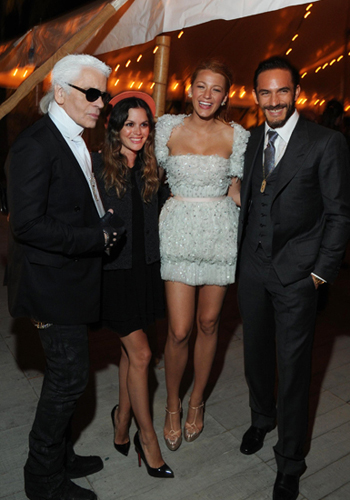 Ever noticed that certain celebrities seem to stick to their favourite labels like glue? Whether it’s because they’re BFFs with the fashion designers, are spokesmodels for the brands or are simply smitten with a certain
maison’s aesthetic, it seems that once an A-lister finds their fashion comfort zone there is no going back. With awards season in full swing and red carpet speculation heading into overdrive, we examine who is costuming whom.

It’s been said that Italian couturier Valentino Garavani’s popularity rivals that of the Pope in Rome and he has found his ultimate red carpet disciple in Anne Hathaway. Unabashedly one of “Val’s Gals,” the newly-engaged actress wears his
molto elegante designs almost exclusively and, it’s been whispered, will walk down the aisle in a bespoke Va-va bridal gown.

Quick, can you remember the last time Zellweger hit the red carpet in anything but Carolina Herrera? The Texan beauty is a true devotee of the New York-based designer saying that her clothes “make me feel as though I’m not trying too hard and that I’m telling the truth.”

Between her now-iconic royal bridal gown and the breathtaking black velvet dress worn at a charity dinner over the holidays, the Duchess of Cambridge has quickly made the house of Alexander McQueen a household name. Sarah Burton, the creative director and successor to the designer, has emerged as a brilliant and inspired choice for a modern royal and together the two have managed to impress the entire fashion cognoscenti with every outing.

When your big sister is marrying the future King of England, you can bet you’re getting your A-game on. Enter Alice Temperley, whose Temperley London line has long been the go-to
party-wear of choice for London’s glitterati. Pippa, was spotted in a glam emerald chiffon gown at the Royal Wedding reception and only a few months later took a front row seat at Temperley London’s Spring 2012 catwalk show.

Find out which other fashion designers have snagged celebrity attention, on the next page…

She may be American’s quintessential golden girl but Blake Lively flies the flag for all things French, particularly when they form two interlocking Cs. As the newest face of Chanel’s Mademoiselle handbag line – hand-picked by the Kaiser himself – Blake makes the red carpet rounds clad in her favourite label and, in fact, is so crazy for Coco that she turned down other lucrative contracts to hold out for.

With two young kids and a rock star husband, Gwyneth’s look is decidedly more low-key than it once was but when the style maven does get kitted out, she selects
Stella McCartney’s form-fitting frocks to show off her intensely yoga-sculpted body. And why not? Over the past few seasons, sexy yet intellectual body-con have quickly become McCartney’s oeuvre.

When Ashley signed on as the face of DKNY )last fall, the gig came with some serious perks namely in getting the First Lady of American fashion Donna Karan to custom design several of her red carpet confections. Apart from fronting the label’s campaigns and acting as a brand ambassador, the
Twilight Saga star has already turned out in a spectacular array of jewel tone dresses.

Despite having a fashion brand of her own in Twenty8Twelve, boho queen Sienna Miller has long been a muse to British designer Matthew Williamson. His effervescent bohemian-inspired designs are, quite literally, made for her.

Which designers have captured the hearts of Natalie Portman, Lady Gaga and Tilda Swinton? Find out on the next page…

Natalie isn’t just a friend or muse to Kate and Laura Mulleavy — the design duo behind the California-based label, Rodarte — she’s their golden ticket. When the
Black Swan actress stood up to collect her Oscar statuette last year, she did so not in a couture Dior design (for which she serves as a spokesperson) but clad in a frothy off-the-shoulder Rodarte confection. She also managed to hook the sisters up with a costume credit for the film and, based on their performance as well as Natalie’s avid support, we suspect it won’t be the last.

Mother monster’s penchant for
outré outfits and looks makes her hard to please. And while she’s often turned to Italian labels like Armani and Versace for her tour and stage costumes, Gaga’s fashion needs are fulfilled by one Nicola Formichetti, her stylist, BFF and newly installed creative director of the storied French fashion house of Thierry Mugler. The singer vamped it up for her modelling debut at Mugler and managed to get her paws on the entire collection in every colour.