Whether or not they scored an actual Golden Globe, these leading ladies are all winners in our books with the best Golden Globes red carpet style. 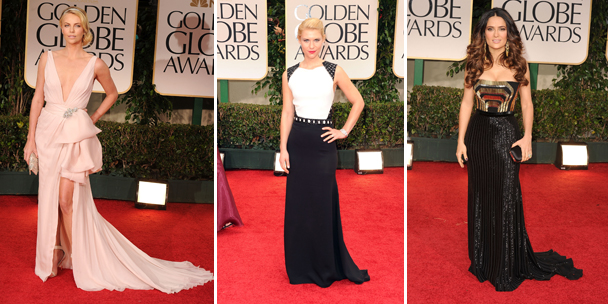 Last night’s Golden Globes ceremony was abundant with striking fashion choices, as stars showcased upcoming trends and paid homage to classic Hollywood glamour. Here, we look at the nine best looks from the Golden Globes and why they are keeping Oscar red carpet anticipation high.

Nicole Richie
Appearing in a backless silver Julien MacDonald gown, Nicole Richie furthered her style clout by capitalizing on spring’s metallic trend. Pairing Jimmy Choo shoes and a House of Harlow bag with a heavy, shimmering gown, the designer pulled hair back to accentuate her dress and to live up to her red carpet statement, “Fashion is from head to toe.”

Charlize Theron
Charlize Theron has been absent on the red carpet, so it was refreshing to see her back this year. Whether an homage to her 2004 Oscar look or this season’s prohibition-era trend, Charlize Theron’s Dior couture gown maintained her legacy of risky choices. Pairing a nude chiffon dress with Cartier jewel museum pieces, the accessories’ heaviness helped anchor the gown’s airy nature. Topping the look with a
‘20s-inspired beaded headband, Theron’s thigh-high slit and sweeping train helped break a streak of award season don’ts, as stylist Leslie Fremar proved Dior chose the right spokesperson.

Angelina Jolie
Breaking from her dark, dramatic streak, Angelina Jolie’s one-shoulder Atelier Versace gown helped showcase the actress’ softer side. As champagne-toned satin accentuated her delicate features, the gown’s red neckline worked with Jolie’s lipstick to create a pop of colour – the only thing that helped draw attention from her handsome cane-wielding date.

More covetous looks from the Golden Globes on the next page…

Salma Hayek
Shining in a strapless sequined Gucci gown, Salma Hayek’s glamorous take on the
metallic trend was furthered by her warm highlights and gold drop earrings. As a heavier bodice anchored her skirt’s iridescence, the actress opted for a silhouette-hugging style that prevented her hourglass figure from being overshadowed by shine and Ricky Gervais’ “cutting edge” humour.

Claire Danes
One of the night’s first red carpet looks, Claire Danes’ black and white J. Mendel dress nearly stole the spotlight from the actress’ award win for Homeland. A modern take on the season’s black-and-white trend, the gown’s high neckline complemented her plunging back, keeping her look tasteful and classic. However, like at the Emmys, Danes also embraced shimmer: in addition to her Bulgari Jewels, the actress’ gown incorporated metallics, keeping the neutral tones fresh and glamorous.

Kate Winslet
While not the overall fashion victor, Kate Winslet’s chancy Jenny Packham gown combined the black and white trend with Old Hollywood tradition and showed off her curves. Using a subtle jewel belt to break up her silk top and column bottom, her simplicity also accentuated her hourglass figure and understated Fred Leighton jewels. A far cry from her modern, spacy dress at last month’s premiere of Carnage.

Toronto-based designer Tyrell found out Kim Kardashian was sporting one of his pieces via Instagram.