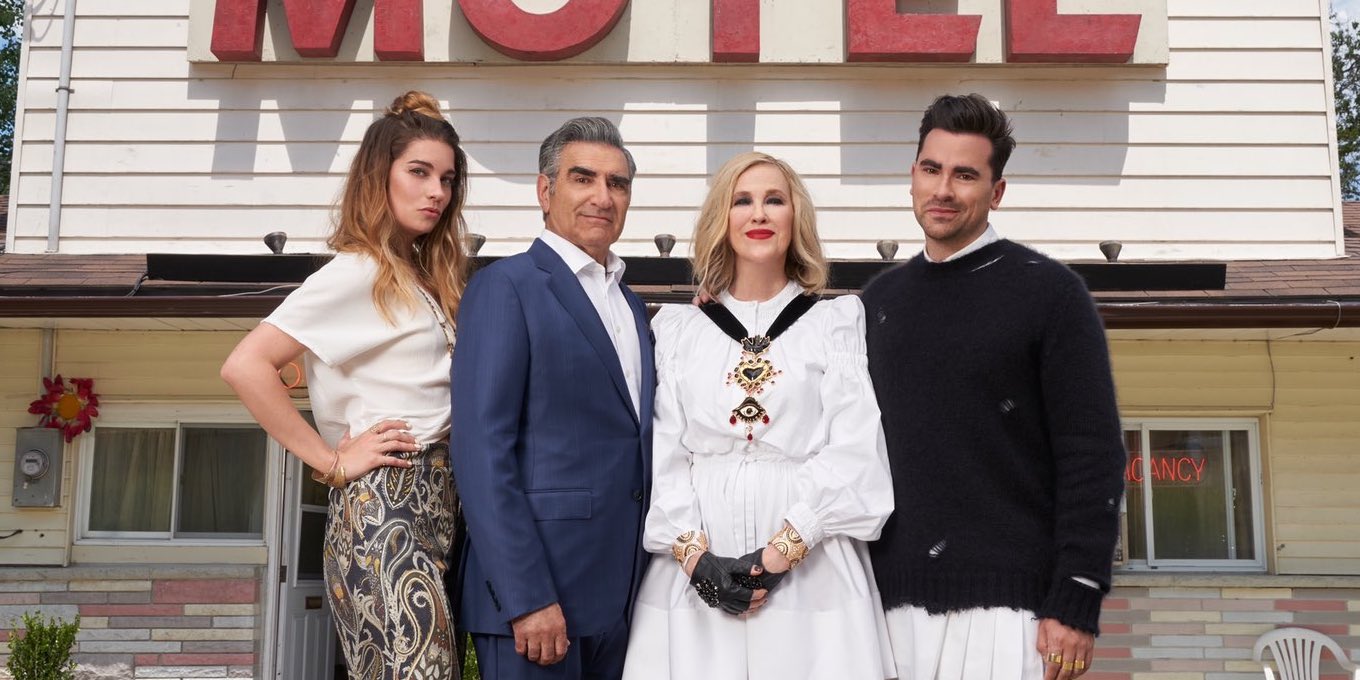 When it was announced early last year that beloved-Canadian-sitcom-turned-international-hit Schitt’s Creek would be ending after its sixth season, the reaction was what you would expect. Fans were quick to express their grief before giving way to understanding; at least series star and co-creator Dan Levy would get to give the show – and Rose family – the goodbye he saw fit.

Stars Annie Murphy and Noah Reid (Alexis Rose and Patrick Brewer, fiancé to Levy’s David) admit there was a similar emotional reaction among the cast. But even though, like the fans, they’ve (somewhat reluctantly) come to terms parting ways with the series, they’re still kind of stuck in the denial phase. “I have mailed Dan care packages and bribes,” Murphy jokes about her on-screen brother. “He will not return my emails.”

Schitt’s Creek returns for its sixth and final season on CBC (and streaming service CBC Gem) on January 7. We sat down with Murphy and Reid for a hilarious conversation about the end of the show and some of their favourite moments.

How did you both react to the news that the sixth season would be the last for Schitt’s Creek?

Annie Murphy: It was cool at first. We found out at the beginning of season five and it was like, “Yeah, we’ve got two more years. No problem. We have loads of time.” Then going into season six, it was like, “Okay, at least we have four months together still.” And then that rapidly went away.

Annie Murphy: And people kept reminding us of the “lasts.” It’d be like, “Oh, this is the last time we’re all in the motel together,” or “This is the last time you’ll be holding a giant menu at the café.” That didn’t help with the heightened emotional level.

Was there a “last” that caught you off guard?

Annie Murphy: It really walloped all of us.

Noah Reid: I actually feel like you kept it together pretty much the entire time.

Annie Murphy: Which made Dan so angry.

Noah Reid: He was so mad. He brought it up several times, like, “I thought Annie would be so emotional.”

Annie Murphy: Yeah, at table reads, I was really stoic. And Dan would be across the table and you’d hear this like [sobbing sound].

Noah Reid: Dan started doing this thing we called “the noise.” He would be trying to hold in the tears so hard that he would start, like, swallowing his face. That’s when we knew he was really feeling it.

Annie Murphy: And then we’d make fun of him for it.

Noah Reid: Which wasn’t really nice of us, because he was really going through it.

It helped you cope.

Annie Murphy: It did. But then it came back on us on the last day, because we all started making the noise too. It wasn’t pretty.

What can you tease about season six for the fans?

Annie Murphy: There are murders. There’s a poisoning. If you like Transylvania, this is a great season for you.

Noah Reid: Yeah, we do, like, a full 180-spin. That’s what you meant by tease right? [Laughs] But no, I think what we’re really trying to do with this last season is go out with love, respect and understanding. We all know how much people have come to feel for the show. It’s become a big part of our fans’ lives and community, and that’s been incredible to be a part of. We have to respect that our audience is going to feel all kinds of things about it finishing. Our goal was to give them the best final season possible. And that includes some truly spectacular wigs, costumes, hilarity and heart.

As you said, Schitt’s Creek has become a huge part of so many people’s lives. What do you hope is the show’s lasting legacy?

Noah Reid: One of my favourite things about this show is how, progressively over the course of these six seasons, we’ve watched the Rose family, who had really felt isolated and disconnected from each other, involve themselves in each other’s lives. My partner works in youth mental health, and there’s this notion she keeps coming back to: Everyone is doing the best that they can, and they can do better. Those two things run parallel. And I think that’s true of the Rose family from the beginning of the show. They’re doing their best, and can do so much better. They’ve evolved as a group to include more people in their community and it’s amazing what happens when you let people in that way.

What has been your favourite moment or thing about playing your characters?

Annie Murphy: There have been so many wonderful moments. When it comes to playing Alexis, what I’m going to miss the most is the overall sense of confidence and enthusiasm that she’s just full of at all times. And I’ll miss all of our group scenes. Still to this day, I’m like, “How the fuck am I doing a scene with Catherine O’Hara and Eugene Levy?” And I loved doing “A Little Bit Alexis.” That was a blast.

Noah Reid: At this point, it’s hard to look back and pinpoint any one thing. I mean, the baseball day, on a personal level. I feel like I forced Dan to write a baseball episode. I was so thrilled on that day. I got a canker sore from all the sunflower seeds I had that then got cut out of the scenes, but that doesn’t matter.

The only fudging done in this episode is that Dan Levy is apparently "bad at baseball." He's a pure hitter.

Noah Reid: In season six, I get to have a scene with the entire Rose family in the motel, which was like…I don’t want to say it was like bucket list thing, but it’s so rare that I get to experience something like that. Patrick enjoys those moments because he gets to see behind the curtain a little bit. And I love them because I get to watch Catherine and Eugene do their thing, and see Dan and Annie react to them as their children. It’s so wonderful and rewarding.

Annie Murphy: And during that scene, Catherine went on, like, an improv marathon.

Noah Reid: She was on fire.

Annie Murphy: We sometimes improvise bits and pieces, but Catherine really went to town that day. It was one of the hardest things, because we had to be very serious and annoyed about what was going on, but Catherine just kept spitting out these insane one-liners. It was a really good day.

After six seasons, did you ever get used to staying in character when you have legends like Catherine O’Hara and Eugene Levy just doing their thing?

Annie Murphy: No. I feel like in the first season, Dan and I were just absolute shit at keeping a straight face. Now we’re just kind of shitty at it. We’ve evolved just that much. You never know what’s going to come out of Catherine’s mouth, especially with her pronunciation of words.

Annie Murphy: Yeah. If you look closely enough, you’ll see me conveniently turning away or Dan putting his hand up to his face [to hide our laughter].

What will you miss most about working with each other?

Annie Murphy: Noah and I were buds before the show, so I hope that we will remain close friends. But it’s been nice, because we have this, like, sense of ease and fun working together that was built in from the beginning.

Noah Reid: Yeah, I actually wish we’d had more stuff together on the show. But I will miss Annie’s ease with which she becomes Alexis. I feel like there’s a trickle-down from Catherine’s comedic workings. She’s so free and does whatever pops into her head at any moment. It’s wonderful. So many actors, when the camera turns on, get afraid of moving or holding their hands a certain way, whatever. Annie just embodies it so well. It’s a wonderful lesson. You put the mask on really well.

What have been your favourite episodes?

Annie Murphy: One of my favourite scenes from the whole show is the anniversary episode, so season two. Johnny and Moira go out to dinner for their anniversary and bump into friends from their past life. Eugene makes this, like, beautiful speech about the town where they now live, Schitt’s Creek, and it makes me cry every time I see it. Eugene is obviously known for being this insane comedic actor, but he has such incredible dramatic chops too. He delivered that scene so perfectly and with such heart. That’s one that really sticks out to me.

Noah Reid: So many jump to mind. One is the season five finale, where we do Cabaret. That was so much fun to shoot, and another one of those moments where the entire cast was there.

Annie Murphy: And it felt like we were actually doing the play. We were backstage with jitters.

Noah Reid: It felt real. And I love the Christmas episode. Eugene is basically Jimmy Stewart from It’s a Wonderful Life and perfectly hits the pathos and struggle of Johnny just wanting to make everything okay for everyone. It’s such a heartwarming episode that I hope endures for years to come.