The Great Canadian Baking Show Is the Ultimate Feel-Good Show

Chatting with hosts Dan Levy and Julia Chan about baking and season two. 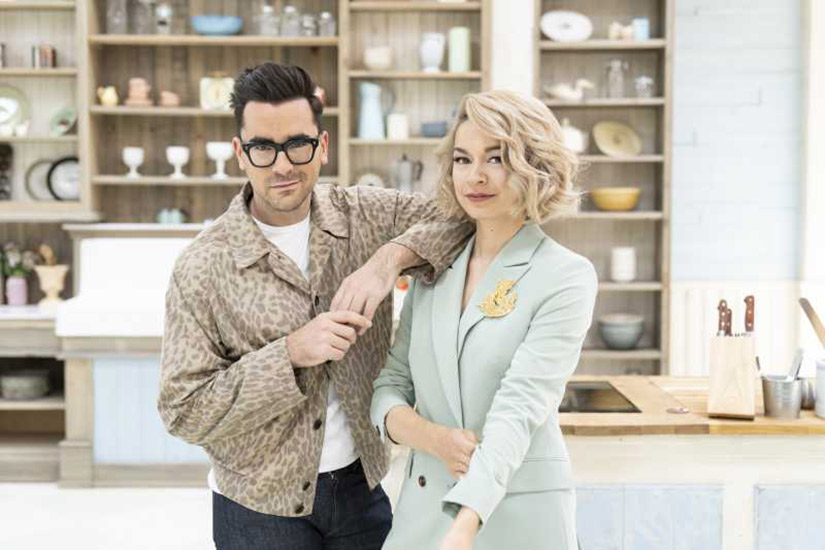 The cast and crew of The Great Canadian Baking Show are preparing to film the second season finale when we visited them this summer on set—which, at first glance, is exactly as serene and idyllic as it seems on TV IRL. There was just one problem: it’s one of the hottest days of the year (up to that point) and it was only going to get hotter. And if you’re a baker, or have ever watched one of these shows, you know that baking and hot weather can equal disaster (think: lots of melting).

But, the show must go on, so as the semifinalists bake through the excessive heat, vying for a spot in that sure-to-be sweltering final, we step out of the tent for a quick chat with the show’s hosts, Daniel Levy (Schitt’s Creek) and Julia Chan (Saving Hope). The duo’s friendship is also as authentic as it seems on TV, leaning into the (oft corny) humour of the show and genuinely offering support to the contestants. “What’s incredible about the show is we get to meet people from all across Canada who come from such diverse backgrounds and are telling their stories and histories through the food that they bake,” Levy says. “It’s such a wonderful way to get to know people.”

We talked to the duo about what to expect from season two of the feel-good show, which premieres on September 19, and if they’ve learned anything about baking themselves.

Julia Chan: This season is everything that we hoped you loved in the first, just bigger, brighter and bolder.

Daniel Levy: Yeah, I think the stakes have been raised now that we have bakers who have seen the first season. It’s almost like, “All right, you know what we’re doing so now we can raise the stakes and really put you to the test.”

You’re both also actors. Is it challenging to go between that and hosting?

DL: I came from MTV, so my career started in hosting television. It’s a very difficult job to be yourself authentically on television, especially from an acting background, where your job is to be someone else. The key is to hosting and connecting with an audience is just to forget about all the things that acting teaches you. Julia had the bigger learning curve and has done such a great job.

JC: I mean, I’m not going to lie: when Dan [asked me to do the show with him], I was a little bit nervous. To be yourself is a whole other skill, and to be yourself in a way that is hyper present was a challenge.

Part of your job as hosts is to talk to the contestants while they’re baking. Does that ever get awkward?

JC: There are definitely moments when a producer is beckoning me to go in and visit a baker who I know does not want me to visit them. But we’ve developed skills and we go in and try to lighten to mood or just cheer them on.

Have you learned anything about baking from doing the show?

JC: It makes me want to bake! I actually had this moment yesterday on set where I thought, “I think it’s time to move on to cake.” Would you eat my cake?

Dan, why doesn’t it make you want even try?

DL: I don’t have the patience for baking. It’s very precise and I don’t like the idea of missing a step and realizing it’s going to be a complete nightmare. I would rather just go to a store and buy a cake then try to make it myself, have it inevitably turn out badly and then regret the wasted time. Not to sound like a fatalist, but it’s just not in me. I have clumsy hands.

JC: Well, we’re a match made in heaven.