The elusive Ray Kelvin on the secret to building a global fashion empire. 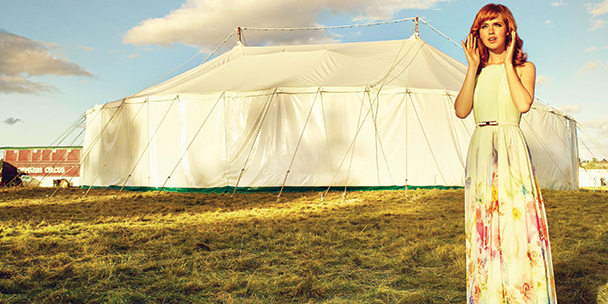 Ray Kelvin is known as fashion’s invisible man: He rarely gives interviews, and in all of his online pix, his face is obscured by a teapot, a large bass or, in one memorable 2011 shot, the Commander of the Order of the British Empire (CBE) award he was given by the Queen for his service to the
fashion industry.

MUST-READ: 5 FASHION DESIGNERS to watch in 2014

A similar reserve informed Kelvin’s 1988 decision to found his business, then a single Glasgow shirt shop, under the moniker “Ted Baker,” rather than his own name. (“If it had failed, I would not have been able to handle it,” he once told
The Telegraph. He needn’t have worried: That shop is now a global mega-brand worth $1.2 billion.) In person, however, the invisible man is a complete chatterbox. He talks in paragraphs, calls out warmly to staff as they walk by and proffers compliments, jokes and hugs—lots of hugs. (A green circle on the floor beside his desk indicates the “Hug Zone.”) “I just love these people,” he says of his team.

MUST-READ: Catch up with DSQUARED2’s Dan and Dean Caten

We’re having lunch at his office, a sprawling Camden compound whose nondescript brown-brick exterior belies its inside charm: Outfitted like a Ted Baker shop, it’s all warm and vintage-y, with mismatched orange chairs, glass lamps and bookshelves. The airy second floor overlooks the atrium, where staff sit at picnic tables enjoying the free noontime meal of grilled salmon and quinoa salad. This is headquarters for the brand, which has stores in more than 34 countries, including an already beloved Canadian outpost that opened two years ago at Toronto’s Yorkdale Shopping Centre. “That store is outrageous!” hoots Kelvin about its profitability. “You really love us.” Ted Baker’s womenswear success is built around a simple principle: The
clothes and accessories—including this summer’s floral fit-and-flare dresses, textured body-con frocks and clutches in juicy fruit colours—make women look and feel lovely.

Ted Baker boasts a robust design team, but Kelvin is always the sartorial starting point. “I can just feel things—I have a sense of fashion,” he muses. “I look at people, what they do, where they’re going, their attitudes.”

Kelvin’s keen eye for style dates back to his childhood, when he helped out in his grandfather’s menswear store. He spent his teen years working in his father’s Tottenham blouse factory, idolizing football players and admiring the “sharp detail” of ’60s gangsters—his first style inspirations. During his early Ted Baker days, Kelvin sold shirts all day and slept on the shop floor at night. He still loves selling—he recently spent a couple of days hustling at Ted Baker’s Fifth Avenue flagship in New York.

Of the brand’s international success, Kelvin is modest to the point of being dismissive. “It has become a global brand because of globalization—it’s not because we’re that clever,” he says. “Today you sell all over the world, whereas when I started, you just sold locally. The last thing I need is more; I want better.” What, then, is he proud of? “You see that guy—the blond one?” Kelvin asks, pointing across the atrium. “He’s gorgeous; he works in IT. He was chatting with the guys, and I heard him say, ‘Ted Baker saved my life.’” Kelvin takes a sip of iced tea, savouring the dramatic pause. “When I asked him why, he said he’d worked at another brand and never, ever felt so defeated; then he came here, and he has never felt so loved.”

GALLERY: 10 CHIC DRESSES every woman should own

Kelvin sits back, beaming. He traces the condensation on his glass, growing thoughtful as he sums up his philosophy: “Forget the clothes—they sell themselves. It’s the people who make the company. That comes through to the customer. It comes through in everything you do.”