Can feminism really be a fashion trend?

Is spring’s feminist fashion movement a case of the emperor’s new clothes? 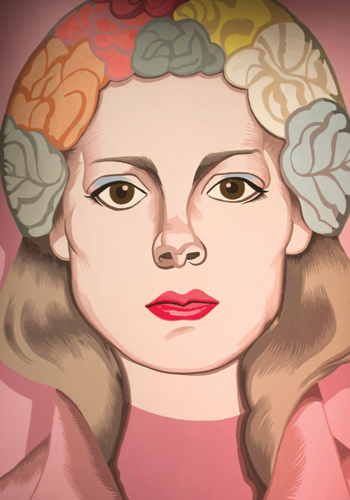 It started with pink. Last spring, shades of fuchsia and blush showed up unexpectedly all over the runways, not only on traditionally feminine babydoll dresses but on moto jackets, oversized coats and pants—women’s clothes. There was something subversive, a little sly, about treating pink as an aesthetic flourish instead of the most loaded hue in the colour wheel—the shade of Barbie dream cars and glossy Playmate lips. Call it “post-pink”: a colour chosen, not imposed.

For
spring/summer 2014, designers went further. Eddie Borgo released a jewellery collection inspired by Pussy Riot and the 1990s’ Riot Grrrl, while at Rick Owens, a team of 40 female steppers—most of them black, none of them size 0—performed a rousing routine wearing the designer’s minimalist shifts and “grit face,” a fierce expression worlds apart from the impassive blankness usually seen on the runway. In Milan, Miuccia Prada showed bra tops stitched onto dresses emblazoned with female faces. “They’re strong, visible fighters,” the designer said of her inspiration. “We need to be fighters in general. There is this debate about women again, and I want to interpret it.” By the time the shows were over, “feminism” was making top-10 trend lists alongside
fringe bags and flat shoes.

Questions popped up like smartphones at a catwalk. Can feminism—the movement shaped by the belief that women deserve equal rights—really be a trend? Was it being used as another discardable buzzword, to be exchanged for “neo-Gothic” or the like next season? And, most important, can fashion—an industry that traditionally displays its wares on white teenagers meant to resemble coat hangers—really be feminist?

The debate cuts to the quick of what it means to be a woman today. Female identity, and its corresponding struggles and rewards, is often wrought in cloth—we constantly absorb messages about our worth based on how we look. “Clothing is political, social, cultural, gendered and incredibly powerful,” says Alexandra Palmer, senior curator of costumes and textiles at Toronto’s Royal Ontario Museum. “Fashion represents change in a big way, even though it’s often talked about as something superficial.” To say that the fashion-meets-feminism issue is complicated is like saying that Coco Chanel had a way with scissors.

If a designer’s primary role is to take the societal pulse, this season’s feminist focus hit the bull’s eye. Women, as Prada pointed out, are so hot right now. This is the era of Sheryl Sandberg’s
Lean In and the #banbossy movement. Marissa Mayer is the much-inked CEO of Yahoo! Teen activist Malala Yousafzai was nominated for the 2013 Nobel Peace Prize. In fashion, the two most influential designers are women: Prada herself and Céline’s Phoebe Philo. And those
skinny white teens have some company—the industry itself is increasingly flexible about ideals in age, ethnicity, sexual orientation and size. In recent months, Mindy Kaling and Melissa McCarthy graced separate covers of ELLE U.S. Marc Jacobs Beauty snapped up the 65-year-old Jessica Lange, while NARS signed Charlotte Rampling, 68, to a makeup contract.
Transgender models appeared in Barneys New York’s spring 2014 catalogue, on the Hood by Air and DKNY runways and in a fashion shoot in a past issue of this magazine. On the eve of New York Fashion Week spring/summer 2014, models Iman, Naomi Campbell and former model agent Bethann Hardison—under the banner of the Diversity Coalition—launched an anti-racism campaign, naming 16 womenswear fashion houses that had used one or no models of colour the previous season. The percentage of black models at New York Fashion Week increased from 6 percent during the fall/winter 2013 season to 8 percent in
spring/summer 2014.

MUST-READ: What is it really like to be a PLUS SIZE MODEL?

Two percent. That’s where the self-congratulatory parade stops. The picture gets murkier when you add the fact that six of the 16 fashion houses cited by the Diversity Coalition are helmed by women: Victoria Beckham, Donna Karan, Monique Lhuillier, Philosophy, The Row and Rodarte. Feminism should be about raising all women up—if female designers resist that spirit, where does that leave us?

“Ultimately, fashion is a business in a capitalist system,” says Palmer. “Designers are as politically sensitive as they need to be, depending on the politics of the day.” In other words, joining the feminist bandwagon—or appearing to—is just good business.

But Valerie Steele, director and chief curator of the Museum at the Fashion Institute of Technology in New York, suggests that designers even using the word “feminism” represents a significant step forward. “Feminism was the F word in fashion,” explains Steele. “Designers might have talked in vague terms about being inspired by independent women, but feminism was not something that they explicitly referenced until very recently.” Steele attributes this reluctance to the charged history between feminists and the fashion world, particularly during the late ’80s and ’90s. “Earlier waves of feminists were very anti-fashion, which tied into the idea that women shouldn’t be spending time and money on the way they look. It’s not surprising that designers wanted to distance themselves.”

MUST-READ: CANADIAN MODELS on the most beautiful things in life

Fashion acts as a mirror, reflecting the strides women make, but it can also be a battleground. Take the most contentious sartorial frontier of the 20th century: women’s
fight to wear pants. Until the 1900s, the upper-class female wardrobe—corsets and petticoats—was so physically restrictive that it forced women to be as decorative as potted plants. To free the woman, you first had to free her body. The result was a struggle with occasionally farcical overtones—in the mid-1930s, the police chief of Paris threatened to arrest Marlene Dietrich for wearing trousers. Why the uproar? “It’s the pants themselves, but it’s also what they represent: two legs and the separation between them,” says Palmer. “It was really about women upsetting the social system of who literally wears the pants.” In 1966, when Yves Saint Laurent, a public proponent of women’s liberation, introduced his Le Smoking tuxedo jacket and trousers, the
Women’s Wear Daily headline read “Yves Sparks Elegant Reign of Terror.”

In the 1980s, pants gave way to pantsuits as newly minted female bosses began adopting the wardrobe of male CEOs. By 1990, pants were so sufficiently entrenched in the female wardrobe that Madonna’s cheeky Blond Ambition-era outfit—a pantsuit paired with a hyperbolic Jean Paul Gaultier cone bra—entered the annals of fashion history.

The Material Girl also heralded a new breed of female star: the near-naked one, who filed her shocking sartorial choices under the mantle of “female empowerment.” The Spice Girls,
Miley Cyrus, even
Beyoncé, grinding in her glorified thong at the Grammys, spring from what Joan Smith, British journalist and author of the seminal feminist book
Misogynies (1989), calls “a slightly crass version of feminist ideals. That brand of girl power is the easiest version for society to swallow.”

Check out an example of feminist fashion on the next page…

As a public feminist, Smith has raised a few eyebrows with her personal fondness for lipstick and high heels. “There’s an attitude that if you like clothes and you like being decorative, you can’t be serious as well,” she says. “That’s nonsense. If people have a problem with how I dress, that’s their problem.” Smith believes that an integral part of female freedom is to create an identity based on who you are, not how you look. “I always knew I was going to be a writer, which gave me the freedom to play around with appearance. That’s an incredible gift.”

Fashion will always be political, clothes weighed down with hidden codes, but the ideal, for this season and beyond, is that it should also be playful—an unapologetic vehicle for self-expression and discovery. As we fight for equal rights, pay and respect, we should also fight for all women to have the privilege of playing dress-up.

LeeAnét Noble, stepper and choreographer for Rick Owens’ standout spring/summer 2014 presentation, tells us about the show in her own words.

“Rick was inspired by the intensity of stepping as an art form. I got the call last April that he wanted 40 steppers. Half of us were in New York, the other half in D.C. I’d record myself doing the moves and email it to the steppers. The clothes were a mystery to us. We didn’t find out what we’d be wearing until the day before the show…. Grit face is all about having intense energy; that’s not always expressed through a smile—what’s expected from women. At the end of the piece, I ended up growling a lot. Afterwards, people tried to define it—they said it was about diversity or feminism. People have a habit of trying to define everything. For me, it was exhilarating. We exposed stepping to a whole new group of people. We showed that you can be creatively open and artistic and successful without trying to fit into the boxes.”