A lesson in style: Do you have to be cruel to be chic?

Any well dressed woman can be stylish, but do you have to be mean to be chic? 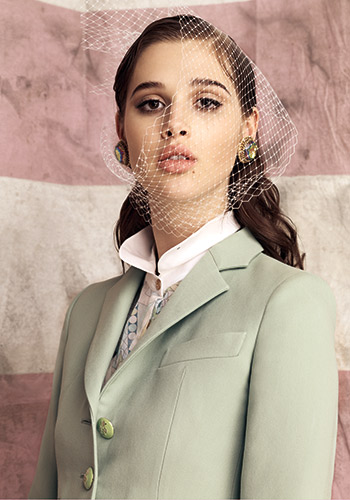 In June of 2006, I encountered the chicest woman I have ever met. I can’t say for sure if she was tall, but I remember distinctly that her heels were. She wore sharply pointed slingbacks—no cutesy peep toes for her—that easily could have been used to gouge out the eyes of anyone who looked at her the wrong way.

She walked in with a big snakeskin purse and an even bigger reputation for being indomitable and sharp-tongued. She was a national broadcaster from Toronto—and still is—so let’s call her Isabella.

At the time, I was working on a CBC documentary and kept a desk at the Vancouver station. Isabella had come to town for a United Nations conference, and I remember the excitement that buzzed around her as she stepped onto the current affairs floor, claiming the desk across from mine by dropping her purse on it. Before the metal fittings finished clattering, I remember thinking “She has it.”

I found her both terribly attractive and terribly fearsome. That day, Isabella was like a younger Countess Jacqueline de Ribes, one of the most stylish women of the past hundred years, who was photographed by Richard Avedon and Irving Penn. Isabella bore more than a passing resemblance to de Ribes: Both had dark hair, piercing eyes, a strong jaw, an aquiline nose and a long swanlike neck. They also both set their features, when before the camera, into an alluring yet implacable mask.

These women were beautiful and well dressed, certainly, but it was their icy scowls, not their designer frocks, that elevated them to true chicness. Is it possible, I wondered, to be both chic and convivial? I have been turning the question over in my mind since Simon Doonan, fashion maven and creative ambassador for Barneys New York, raised the subject in his recent collection of autobiographical essays, The Asylum: A Collage of Couture Reminiscences… and Hysteria.

Smiling may not always give off the impression you intended. Read about one way smiles and scowls can be perceived…

Doonan recounts a conversation he had with Sir Hardy Amies, who was best known as Queen Elizabeth II’s dressmaker. He asked Amies if he had ever “been tempted to shake things up a bit and squeeze the reigning monarch into something a little more, shall we say, stylish.”

The impertinent question earned Doonan, if you’ll pardon the pun, a dressing-down. “The chief requirement is that Her majesty must appear friendly and approachable. She can never appear to be…unkind,” said Amies, according to Doonan.“If Her Majesty appeared in public looking chic, it would be disastrous. Why? Because there is…a terrible unkindness to chic.”

Upon hearing that, Doonan hunted through his “mental Pinterest,” as you may be doing now, in search of “both kindness and chicness.” He came up empty. As did I. There is certainly an intangible qualty to chicness. If you flip or scroll through images of the great beauties since the advent of film, they won’t seem chic if they are smiling. Rather, the chic ones are removed from the action around them or, at least, emotionally detached from it. A toothy Lauren Bacall or Catherine Deneuve may be charming, pretty, even beautiful, but she won’t be sincerely chic. For that, she must scowl.

When New York photographer Leland Bobbé began his street-photography project Women of Fifth Avenue, he was only looking to document urbane women of a certain age and class who were within 10 blocks of the luxury department store Saks Fifth Avenue. The “styled to the nines” women he shot possessed, for all their comeliness, a dour, don’t-speak-to-me countenance. “It’s a reflection of being on the streets of New York,” explains Bobbé. “It’s self-protection.” Of course, I would argue that self-protection is a part of being high fashion. Chic expressions are like impeccable clothing: They can act as armour against insecurity and the judgment of others.

Learn about how your facial expression can affect your mood…

In fact, there is fascinating social-psychology research that supports my suspicion of a connection between facial expressions and chicness. Note: It’s bad news for all the smilers. In an article in the journal
Evolutionary Psychology, Timothy Ketelaar explored
how smiling affects perception. In this battle between the Bettys and the Veronicas, if you will, the Bettys are seemingly doomed. Researchers found that when a model smiles in an ad, most observers conclude that the brand is “low prestige.”

How to wear a STATEMENT COAT: Street style inspiration

In another round of experiments cited in the paper, college football players who maintained a neutral, or even hostile, expression were perceived to be larger—which, in football, means better, concluded the paper. Glowering could be understood as the equivalent of making lots of noise when you encounter a bear.

There is some good news for Team Friendly: Researchers at the Yale Center for Emotional Intelligence believe that smiling should be the new chic. Making a sour face can darken your mood, say Drs. Robin Stern and Diana Divecha. “There’s something called the ‘facial feedback hypothesis,’ which says an expression can stimulate or evoke a feeling,” explains Stern. Furthermore,
emotions are contagious. “When you put a couple of people in a room and one of them has a strong emotion, other people catch it.”

Now, I’m scowling (in deep, consternated thought). It seems to me there’s a lot of unkindness going around.
The chic woman—intentionally or not—puts out a look of disinterest or disdain. Eventually, that negative expression becomes an emotional reality. Then those of us who observe that chic woman feel our evolutionary responses kick in and fear arises. How undelightful.

Find out what real chic looks like on the last page…

Is that what chic is? Mutual dread disguised to look like aspiration, admiration and ineffable elegance? If the Yale Center for Emotional Intelligence had its way, we would dispense with the current chic and replace it with a sunnier kind. “People have a lot of stress an anxiety in this world,” says Stern. “You’d think that
people in fashion would want their models to smile. It would be nice to turn to a fashion page and see a person full of life and love.”

In fact, for the past few seasons, Diane Von Furstenburg has sent her models down the runway with beaming faces with no ill effects so far. Her company’s annual revenue is estimated to be $200 million a year, which is nothing to frown at. But I have been told that the pleasant anti-pouts did freak out a lot of editors;
a close look at the runway images does reveal a certain maniacal tinge to the models’ grins. While a sincere smile is always beautiful, a forced one is less so. The difference is in the eyes, because the eyes can say “Why is DVF making me smile?”

Which brings me back to Isabella and her real-world chicness. I smiled and smiled like a fool at her that day as she brusquely returned missed calls and blazed her way through a meeting. Once or twice, her right eyebrow arched so high it could have won a role in a French new-wave film. Then she looked up and started snapping questions at me: Who was I? What show did I work on? During her barrage of questions, I realized the crispness of her dress, attitude and even her speech was how Isabella made herself at ease with the unknown—the strangers, the dangers, the wideness of the world.

Somewhere during our bullpen confab, I said, “I love your shoes.” And her defences came down. Reflecting back now, I see that her chicness was entirely different from the kind you find in static images. It was dynamic. Real chic may begin with a pose of aloofness or defiance, but it can be transformed by a moment of inwardness or bemusement. Real chic is not so scary.

A senior network producer spied us talking. She angled in and said to Isabella, “Have you met?”

“We’re old friends,” said Isabella. Then she let out a peal of laughter, like a bell marking the turn of the hour—like a gate opening or a flag unfurling.