Up all night with DSquared2's Dan and Dean Caten: Designer profile 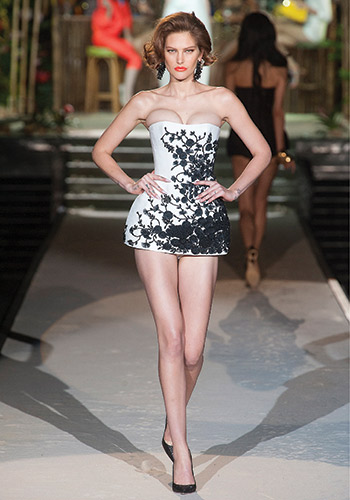 "We’re nervous,” confides Dean Caten, elegant, insta-charming and thinly glazed with nervous energy. “Our entire family is here—that’s new for us.” Dean and his brother Dan, the Ontario-born, Milan based DSquared2 designers, are in Toronto for the first
Canadian Arts & Fashion Awards, which kick off in about four hours. Later tonight, the Catens will walk away with wins in both their nominated categories—International Designers of the Year and Outstanding Achievement—and, at the chandelier-lit podium, wearing matching tuxes punked up with camo print, their voices tight with tears, the twins will thank their parents and seven siblings, who, along with the rest of the crowd, will be on their feet. “We’re living our dream. We couldn’t have done it without you.”

MUST-READ: 5 fashion designers to watch in 2014

But that’s all still ahead of them, as they order drinks (a cosmopolitan for Dean, champagne for Dan) in a slick hotel bar and settle in to chat about their extraordinary 30-year career as fashion’s most beloved showmen. Much of the DSquared2 origin story has passed into fashion myth, but the highlights bear repeating: In 1983,
Dan and Dean
left Toronto to study fashion at Parsons The New School for Design in New York; by 1986, they had their first line (the sweet, if regrettably named, DEanDAN); two years later, they began designing for Ports and three years after that, they moved to Milan. After working for Gianni Versace and Diesel, they launched the DSquared2 menswear line in 1994 and then womenswear in 2003, attracting one name only celebrity clients with a penchant for sartorial bombast: Madonna, Britney,
Rihanna. Now the DSquared2 empire includes fragrances, a burgeoning kids line (Dan: “It’s adorable!”) and a restaurant, Ceresio 7, the new HQ for Milan’s cool-kid elite. “Michael Bublé came by after his concert, and he was like, ‘Oh, my God, this is so good,’” remembers Dean. “He called the restaurant the next day and asked if they could send five steaks after his show. And they did.”

What’s new for the Spring 2014 DSquared2 woman? Dan and Dean share their inspiration on the next page…

That’s part of DSquared2’s appeal: Hanging out with the Catens offers instant in-with-the-in-crowd glamour. Backstage in Milan in 2012, I watched the twins work the room, chatting with models, camera crews and the Irish pop duo Jedward, who were their special guests. A full corner of the room was lined with Moët.

Fittingly for such natural extroverts, DSquared2’s signature is the OTT runway show. Each season, the Catens select a theme and build around it, like artists daubing layers of paint onto a canvas. Fall/winter 2007, for example, featured an acrobatic performance by construction workers as well as voluminous cargo pants and biker jackets, while spring/summer 2013—the Jedward-attended season—translated ’90s supermodel inspiration into corsets, denim hot pants and a set made to look like a famous Peter Lindbergh photograph. For spring/summer 2014, the Catens set up a tiki hut and sent models down the runway in vivid lampshade hats, cat eye shades and ultra micro-minis.

“The women’s collection actually came out of the men’s show,” explains Dan. “The idea was that a guy finds himself stranded on a desert island that becomes a tropical paradise, and he has to adapt his clothes to it.” The womens- wear, by contrast, is “tropical, yes, but a bit more couture: ’50s but sexy—Latina ’50s. She’s ready to go out dancing.”

EXCLUSIVE INTERVIEWS: Our chats with the world’s top fashion designers

The DSquared2 woman, it seems, is always ready to hit the dance floor. If the Catens’ depiction of femininity is on the hyperbolic side, it’s largely because their earliest muses were women—they’ve referenced their “disco queen” sisters and cite their effortlessly chic mother as their first style icon. Dan describes DSquared2’s idealized vision for women as “sweet but deadly. Not timid, not sappy. Pretty is always nice. But pretty with a strut.” Women of the world, consider it a challenge.