Canadian fashion is coming into a celebrated cachet of its own—here are 10 labels that are making this country a more stylish and vibrant place to be. 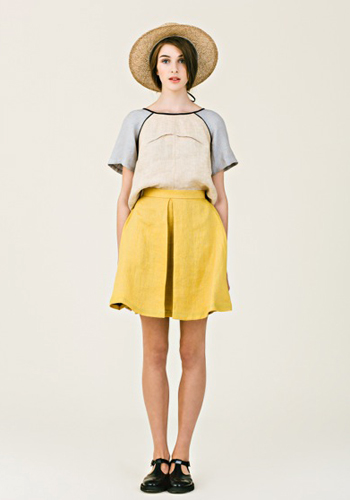 Canadian fashion is a beautiful, rich tapestry of thought-provoking style—and the designers behind it all are pretty great, too. We rounded up the top 10 Canadian fashion designers making noise both at home and around the globe that you need to know right now.

Canadian fashion designer: Eliza Faulkner
Home base: Vancouver Island
Why we love her: Before launching her namesake label in 2012, the Central Saint Martins grad interned with another London-based Canuck, Erdem, as well as Zandra Rhodes and Roland Mouret. But it’s no surprise that Faulkner headed back west where the supernatural backdrop of British Columbia serves as inspiration for clean-cut yet vibrant sportswear-inspired aesthetic.

Canadian fashion designer: Phillip Sparks Tailored Goods Inc.
Home base: Toronto
Why we love him: The west-end Toronto studio is a place where dapper is born: Mad Men-esque mood boards and his penchant for all things vintage and sepia-toned give rise to designer Phillip Sparks’s contemporary menswear and women’s collections with a timeless appeal. This spring, Sparks launched his first collection of vintage-looking specs with Toronto eyewear shop Optianado.

Canadian fashion designer: Sarah Stevenson
Home base: Toronto
Why we love her: Since launching her eponymous label in 2010, the accolades came quickly for textile and clothing designer Sarah Stevenson: she was the Toronto Fashion Incubator New Labels winner in 2013 and won the Emerging Talent Award at the inaugural Canadian Arts & Fashion Awards this year. As part of her TFI prize, Stevenson created a capsule collection for Target Canada that launches in stores this spring.

Canadian fashion designer: Melanie Auld
Home base: Vancouver
Why we love her: The idea behind jewellery designer Melanie Auld’s delicate yet off-the-cuff pieces is quite simple: “Jewellery that stands out but doesn’t take over,” she told us in our “Ones to Watch” story for our March issue. The colourful, ladylike pieces are both timeless and inspiring—just the way wearable art should be.

6 more Canadian fashion designers we love on the next page…

Why we love them: Sisters Chloé and Parris Gordon founded their high-end streetwear label in 2009 (then known as Chloé comme Parris) and have become the de facto It show of Toronto Fashion Week. Their ready-to-wear and jewellery label officially recalibrated as Beaufille (“handsome girl”) in April 2013—bringing all their trademark
menswear-inspired sophistication with them.

Why we love them: Who better to convey a visceral love story of beautiful aesthetics into well-made (and beautiful) garments than writers? Heidi Sopinka and Claudia Dey (a journalist and novelist, respectively) launched their very Parisian clothing label (think dreamy Bohemian style) in 2012.

Why we love her: No stranger to giving love to the city that inspires her work with
signature prints, Raina—the Kashmir-born designer behind the beloved Toronto subway scarf—will debut her Fall 2014 collection at World MasterCard Fashion Week in Toronto this spring, a love letter to her adopted city.

Why we love him: The Toronto-born Kale boasts a resume that’s as bold and daring as it is the stuff of fashion legend: after dropping out of Central Saint Martins, Kale moved to Milan and interned with DSquared2. He launched his eponymous label of functional yet fragile women’s wear in 2007—and has since dressed the likes of J. Lo and Beyoncé.

Why we love her: Siegel’s global-inspired label is a direct translation of her nomadic life: she studied at Central Saint Martins in London and splits her time between Toronto and New York. Her travels continue to inspire the thoughtful ready-to-wear pieces in her ethically crafted collections.

Why we love her: The self-taught jewellery designer started designing in 2009, and launched Armed, her flagship store in Toronto’s eclectic Dundas West neighbourhood, two years later. She’s been creating
edgy pieces with a high-end twist ever since.