Give me five: The glove makes a comeback

Not just for the Queen anymore, gloves make a comeback this fall. 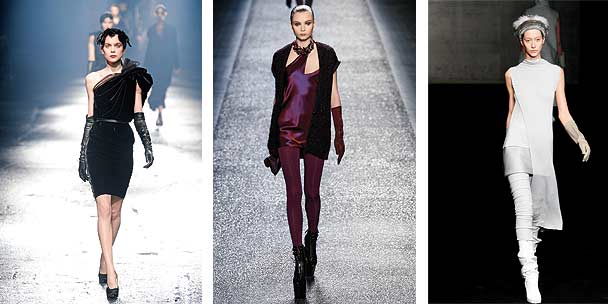 Over the past few years, the sequestered Palais Royal in Paris has quietly become a destination spot for the acutely fashionable. Joining the dusty boutiques of miniature tin Napoleonic soldiers and music boxes are design names for the discerning, like Marc Jacobs, Rick Owens and Stella McCartney. But nothing establishes the Palais Royal’s cutting-edge cre­dentials quite like its accumulation of customized glove boutiques. Well, there are only two in its arcades — the 85-year-old Maison Fabre and its competitor across the garden, Mary Beyer — but when one also takes into account the venerable glove firm Causse, which recently opened its doors just off nearby Place Vendôme, it points to a critical mass of gantiers in Paris, which means that sooner or later, we are bound to feel the repercussions.

Gloves have become the latest hue and cry of the style hounds. Though a near-defunct accessory since the Eisenhower years, they were virtually ubiquitous this season, turning up at Proenza Schouler, Nina Ricci,
Lanvin and Yohji Yamamoto, to name a few. “When my father retired, the market for gloves was dead,” says Michel Perrin, the fifth generation of Perrin Paris, which launched in 1893. “We only made gloves for the army and the industrial workplace. But about four or five years ago, couture houses started coming to us. After 2000, Lagerfeld always showed gloves in his own collections and in Chanel’s. Now you see them everywhere, even in prêt-à-porter.” Perrin had the moxie to open a boutique in Beverly Hills — the city of bathing suits, bling and yogawear — in September. The Perrin family and a few other European glove dy­nasties are betting on the sturdy comeback of the glove.

The return of five-fingered fashion is, of course, part of the industry’s usual boom-and-bust pattern and has as much to do with ADD-afflicted designers in search of the latest marketing must-have as with wider social phenomena like germophobia — after all, what better accessory for our Purell-obsessed generation? What is indisputable, however, is that, after It bags and diamond-studded cellphone gewgaws, gloves are the next big thing. And what was solely a winter warmer, communion accoutrement or class signifier has evolved into a compellingly revived trend.

Many of the items in the rival glove stores at Palais Royal look nothing like the sensible white things old Mrs. Wickham used to pull over her hands on Sunday morning or the thin perforated-leather driving gloves ladies used to wear at the wheel: At Maison Fabre, founded by Etienne Fabre in 1924 and resurrected in 1998 by his great-grandsons, gloves have change purses cleverly integrated into the wrist, bared knuckles or, in swashbuckling style, skirting around the wrist. Some gloves, if they can still be so called, constitute only the fingers, ending at the top third of the hand — roughly where the heart line runs — while across the way, at Mary Beyer, there are sparkling neon “manchettes” that cover the hand but not the fingers, ending right at the cleavage of the digits.

Beyer, a former model, has been particularly ruthless in reconfiguring what has heretofore been called “the glove” but now clearly requires a whole new noun — or, at least, an adjective. Beyer is a key figure in glove manufacturing by virtue of the fact that she saved Lavabre Cadet. A legend­ary atelier in Millau, one of France’s three glove-making centres, Lavabre Cadet has been making gloves since 1946 but was threatened with closure in 1999. Beyer mortgaged her house, partnered with two associates and bought it. She makes sublime, customized gloves of kid leather, peccary leather and pike-headed alligator skin (“It takes one tail to make a single long glove”) and has produced them for everyone in the business, from Jean Paul Gaultier to, most recently, Rick Owens. Her gloves are eccentric and sexy and typically feature complicated latticework and button-closings at the wrist, which Beyer advises to leave tantalizingly unfastened.

Aside from the astounding handiwork is Beyer’s rethinking of what a glove can be. One specimen looks like a bejewelled sleeping mask, with a loop at what would be the curve for the bridge of the nose. A quick demonstration shows that the loop anchors what is more a cuff than a glove to the middle finger and is then buttoned around the wrist. Voila! The summer glove. “Many of my clients from hot climates have damaged hands, and they like these cuffs because they protect the hands from the sun,” says Beyer. “That’s where you can see signs of aging.”

Gloves are also considered snobbish: You wear them to shake the Queen’s hand, and how many times does one get to do that? “Gloves were once just for the top class, for bluebloods,” says Italian glove-maker Giorgio Sermoneta. “No one else had occasions to wear gloves.” Fashioned from expensive hides, finished with the finest silk or cashmere lining and requiring extremely skilled pattern makers, seamstresses and, particularly, cutters, gloves are a labour-intensive luxury item and the accessory of the chattering classes. “It’s one of the most difficult accessories to make,” says Sermoneta. “From beginning to end, a glove goes through 24 different sets of hands.”

Is the glove here to stay? Find out on the next page …

Nothing trumps class quite like fashion, however, and the trendiness of gloves is such that even a commoner can slip on a pair without feeling like an interloper. For those who require or demand the bespoke variety, though, there are few aristocratic indulgences like the made-to-measure glove. “I’d read a piece about Mary’s gloves on the Internet,” says a customer in Beyer’s shop. “I called her up, practically in tears. I told her that for 50 years, I hadn’t been able to find a single pair of gloves that fit my hands.” To illustrate her point, she pulls her hands out of her latest purchase:specially made gloves in the softest almond-hued peccary with intricate latticework that buttons on the back of the wrist. “You see? I have extra-long fingers. You can’t get a pair of gloves like this anywhere.” Since discovering Beyer, she orders 11 pairs of gloves a year. They have their practical uses, certainly — warming cold hands, shielding the skin, hiding expensive rings from too- curious eyes and pulling together an outfit — but for this customer and connoisseurs like her, gloves appeal to the most primeval tactile needs: It is the almost-ceremonial pleasure of putting on a pair of perfect-fitting gloves, sheathing one’s hands in gorgeously supple leather and slowly fitting them over one’s fingers.

“O that I were a glove upon that hand, that I might touch that cheek,” whispers Romeo below Juliet’s balcony. Alas, his flesh may not touch hers but that next best thing, the glove — our veritable second skin.

Zippers are hot for fall