Zip it good: Zippers are hot in fall fashion

Not for the faint of heart, this fashion trend's got teeth. 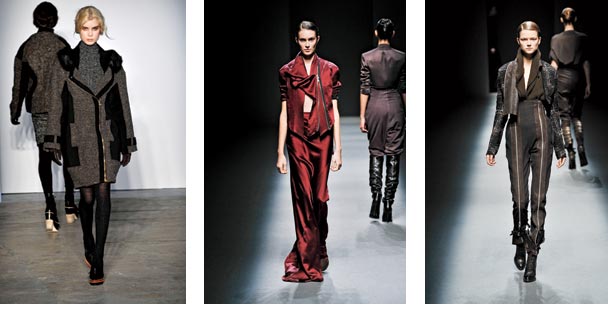 Bits of hardware, zippers are zippily construed as signs of hard-bitten chic. They bared their teeth in the ’80s and, along with other echoes of that decade, have made a comeback.

An ornamental motif in
accessories — on everything from hair bands to high-top sneakers — zippers have recently become a regular feature in
ready-to-wear. For a few seasons already, they have been unabashedly exposed down the backs of dresses. This fall, they travel the lengths of Balmain skirts, Proenza Schouler coats, Haider Ackermann pants and Isabel Marant leggings.

Instant signals of industrial edge, zippers, nonetheless, have their gooey aspect: They brought out the soft side of Karen Walker, the pillpopping cynic on
Will & Grace, who, in one episode, admitted: “I love Chinatown. You can buy a bag of zippers for a dollar. I hand them out to poor kids. I love to watch the look on their little faces as they zip and unzip their new toys.”

Robert Friedel, an American professor of history, found the slide fastener so fascinating that he was moved to write a book about it. In his introduction to
Zipper: An Exploration in Novelty, published in 1996, he speaks touchingly of the ordinary little gadget as a symbol of the newness that people in modern times have come to expect and cherish as an improvement in the human condition.

What makes Canadians grow really misty-eyed is the idea that the zipper was a Canadian invention. Though this wasn’t the case, it is still no reason to put away the hankies: Most of the credit goes to Gideon Sundbäck, an engineer who was born in Sweden in 1880, immigrated to the United States and was working for the Automatic Hook and Eye Company in Hoboken, N.J., in 1913 when he perfected the device that had been worked on by several others — most notably American Whitcomb Judson. Besides the slide fastener, Sundbäck also invented the machinery that was best suited to making them and was the pride of the Lightning Fastener Company, which he became president of and moved to St. Catharines, Ont., in 1925. The company lasted until 1981, at which time hometown girl Linda Evangelista was about to become the region’s second most important contribution to fashion history.

Keep reading to find more information on the history of the zipper and its modern representations…..

Finding the right denim for your body shape has never been easier!

Given their onomatopoeic name in 1923 by the B.F. Goodrich Company, which used them on rubber boots, zippers — which are known to catch — were slow to catch on. Used on money belts and tobacco pouches, they didn’t become an instrument of fashion until 1933, when Charles James — who was impossible to get along with and a genius at clothing construction — wound a zipper around the torso of a day dress that, in the spirit of going places, he called the “Taxi.”

Even more famous for gadgetry was Elsa Schiaparelli. In a New Yorker profile in 1932, Janet Flanner wrote that the Italian designer had “a gift, almost uncontrollable at times, for discovering beauty in lowly objects that have hither to escaped attention by being universally useful.”

In 1937, thanks to Schiaparelli’s influential use of zippers, the same magazine reported that Talon — another zipper company that Sundbäck was involved with — had experienced a 1,000-percent increase in sales over the past year.

It was also in the 1930s when advertisements pitched zippers to men as an alternative to the button fly, using side-by-side pictures of crotches, gaping and streamlined. American humorist S. J. Perelman wasn’t persuaded and described the fellow in the newfangled fly as looking like “a mealy-mouthed, psalm-singing scoutmaster.”

There are still holdouts, including a large portion of the gay male population, as well as Jerry Seinfeld, who, in one episode of his TV series, announced: “That is one place in my wardrobe I do not need sharp, interlocking metal teeth. It’s like a mink trap down there.”

Zippers were a symbol of a fearful future in Aldous Huxley’s 1932 novel, Brave New World. The wardrobe of the heroine is dripping with the mechanisms, on her viscose velveteen shorts, “zippyjamas” and “zippicamiknicks.”

Contrary to any dystopian predictions, zippers have played a sassy, playful role in modern costume, being an exact meeting point of dress and undress. In the 1933 movie Dancing Lady, a judge asks a hoofer brought in from a burlesque raid to define striptease. She answers, “A good constitution and a couple of zippers.”

Keep reading to find out how zippers have turned up in modern representations….

Mary Quant, the legendary designer of the swinging ’60s, recently displayed an equally unabashed appreciation for the zipper. Interviewed by London’s
Daily Telegraph on the occasion of one of her minidresses being featured on a stamp issued in celebration of great British design, Quant, in her 70s, called the black “Banana Split” dress — which has a zipper from chin to navel — her favourite.

And, if not exactly a boon, slidefastening mechanics were no impediment to the pleasure famously proposed by Erica Jong in her 1973 novel
Fear of Flying, which she called the “zipless f**k.” Essentially, sex without commitment — still a novelty for women long after zippers themselves ceased to be — could make zippers fall away “like rose petals” and
underwear fly off “in one breath, like dandelion fluff.”

In the ’80s, zippers lost all links to fluffiness. Punks ran amok at the notions counter, turning
cheap, useful, ingenious articles like safety pins and zippers into decoration. Resuming a functional role, slide fasteners played a part in the pareddown minimalism that lasted into the ’90s, when fluff staged a comeback and grown women started going around in dresses done up with girlish ribbons.

To make the point that it’s again time for a shift, zippers have been revived as assertive details — sometimes with a startling and imposing effect. Yes, there’s something about them that can be mean — just ask the guy from
There’s Something About Mary — but when the pull passes over two rows of teeth and turns them into one, it always seems like magic.