Are you an eccentric?

Take the quiz to find out. 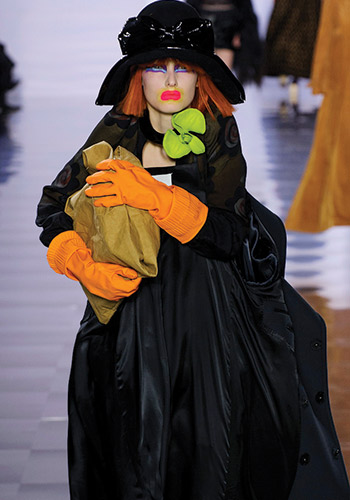 If you’re a creative, curious, idealistic, non-conformist who is obsessed with certain hobbies you could be an eccentric, according to Dr. David Weeks, an clinical neuropsychologist who has studied eccentricity for two decades.

In his seminal work, entitled “Eccentrics: A Study of Sanity and Strangeness” the Edinburgh-based researcher studied 1,000 individuals who one might kindly describe as a little strange: everyone from a Chippewa Indian who walks backwards to an artist who runs a Gnome Reserve in west Devon. “I also met three Robin Hoods who all live in different parts of England,” Weeks explains via email.

Weeks wasn’t aware that eccentricity was a key trend on the fall runways, but he does say there are more eccentrics than there used to be. “Eccentricity has been increasing since the 1950s,” he writes. “The proportion of female eccentrics has also increased since the early 1900s. In North America, the male to female ratio is 50:50. In the U.K. it is 40 percent female to 60 percent male.”

He speculates the increase reflects more people’s willingness to “rebel against the blandness of a consumerist society by asserting their independence and their willingness to be different.” Weeks adds that the increase in female eccentrics is due to “their own assertion of equality and freedom, starting with Women’s Suffrage to the many voices of the feminist struggles.”

Although fashion designers from Maison Margiela to Miu Miu are exploring their quirky side this season, you can’t always spot an eccentric by his or her outfits. “Style plays a part, but it is more prevalent in groups of like minded people — hippies, punks, New Romantics, Goths — between the ages of 13 and 30, than in more individualistic eccentrics,” explains Weeks. “Eccentrics tend to lead fashion trends, often without trying, but it’s only one part of an eccentric lifestyle. So, it’s more a consideration of one’s behaviour, thinking and lifestyle than outward appearances.”

So, how can you tell if someone—who is known for their flamboyant style—is the real deal, or a fauxcentric? For example, some might argue that Lady Gaga is faux and Bjork is the real deal? “To tell the difference it’s best to know their motives — curiosity and creativity in the case of eccentrics; and exhibitionism, attention seeking and publicity in the faux,” says Weeks. “Also their ways of thinking and behaviour and attitudes in context are telling.”

1. I want to know more about everything. Always Sometimes Never

2. My ideas are ahead of their time. Always Sometimes Never

3. I like to feel free to do what I want to do. Always Sometimes Never

4. I have original thoughts about all manner of things. Always Sometimes Never

5. Do you feel like a square peg in a round hole? Always Sometimes Never

What are the upsides to being an eccentric?
“Eccentrics are about 25 percent less likely to experience anxiety or depression because they don’t feel they have to “keep up with the Jones.” They are happy doing what they’re doing creatively and they value their personal independence… There are also a number of eccentrics who are gay, bisexual, transgender or androgynous, and prefer open relationships or less conventional lifestyles.”

Can someone decide to become an eccentric?
“It’s a choice that is usually made in two thirds of eccentrics in childhood,” explains Weeks. “The other third are composed of those who choose in their early twenties to early forties. As in the case of other complex behaviours there are likely to be gene-environment interactions, as well as the free choices that take place at key points in a person’s life. Eccentrics can nuture their defining traits and they can be reinforced by other people’s positive responses. Most eccentrics are well-liked and valued for what they do and how they do it.”

The downsides?
“There is about a 25 percent extra chance of divorce or separation,” says Weeks. “This is because eccentrics are idiosyncratic and their partners need to be patient and tolerant. Female eccentrics have an increased likelihood of voluntarily splitting from their spouse in their 40s or when their children leave home. At that point, they blossom and become more eccentric and creative.”

Dr Weeks’ latest book, The Gifts of Eccentrics: Imagination in Reality is available in paperback and ebook from Amazon.