Women on the verge 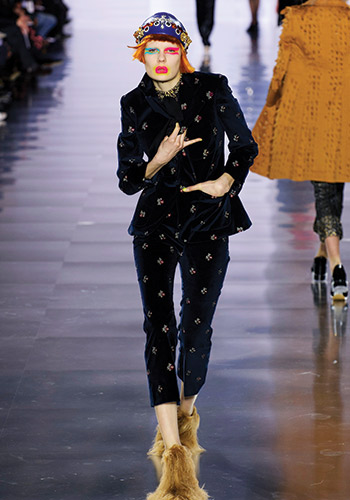 The polite way to describe one of this season’s major trends is “eccentric”. Straight shooters however, call it what it is, which is just plain screwy. Nutty. Whack. Non compos mentis. The first tipoff that something delightfully strange was happening on runways was the Bigfoot bedroom slippers we saw at Maison Margiela. That these sprang from the freshly rehabilitated mind of John Galliano isn’t entirely implausible, but when they showed up at Gucci – a house that has never before qualified as weird – it was proof of a full-blown fashion movement.

The new nuttiness is not an easy look to pull off. You have to be prepared to go against your best instincts. It also requires wearing a lot of things at the same time: blouse under sweater over skirt under jacket over tights, all with a beret. And it’s imperative that these items clash, or at least engage in a minor aesthetic skirmish. Take as your cue the snakeskin on houndstooth at Miu Miu and the funhouse pastiche of patterns and textures at Giambattista Valli. At Nicole Miller, camouflage jackets and multicoloured marabou-feather shrugs were paired with nighttime-forest prints and laddered stockings. “I like contrasts and things that don’t obviously go together,” explains Miller. “Shock appeal gets people interested, but in the end you do have to be somewhat realistic. I’m not a fan of wear-once clothing.”

The inspiration for many of these hodgepodge looks came from offbeat personalities like Diana Vreeland (Marc Jacobs) and poet Edith Sitwell (Andrew Gn). In Gn’s case, it was a photo of Sitwell in a brocade coat sitting next to her dandy brother. The Paris-based Singaporean broadened the luxe-boho storyline to include an impoverished aristocratic family, stylish but struggling. Gn’s motley assemblage of frizzy Mongolian wool, shawl fringe and elaborate pattern-on-pattern drapery coats is a rebellion against safe neutrals and total looks. “The  mood is about rich textures and precious embroideries but treated in a fanciful and whimsical way,” says  Gn. “I was inspired by Venice and the faded splendour of its palazzos. The story  behind this fall/winter collection is of a noble  and bohemian family. In order to keep warm dur ing the winter months, they ‘recycle’ into coats and dresses the tapestries, brocades and trimmings that once adorned their house.”

Yeny Oh, womenswear buyer for the French department store Citadium, credits Vivienne Westwood with pioneering this outré style in the ’80s, adding that J.W. Anderson’s styling for his fall/winter 2015 show was masterful at throwing together unique and unexpected pieces. “They look like they shouldn’t belong together, but they look really great nonetheless because it’s how very stylish women dress, throwing caution to the wind!” says Oh. “The modern woman doesn’t want to wear a uniform. She wants to express herself and play with the unexpected. Most of all, she doesn’t give a s*** about what’s proper or appropriate.”

It’s not just women who are throwing caution to the wind; whole fashion houses are too. Alessandro Michele, the new creative director at Gucci, catapulted the Italian house out of its safety zone into totally unknown geek territory. He channelled singer Jarvis Cocker’s geography teacher vibe into spectacles, pony-skin clogs and a forest green leather suit. Silk dresses with chesterfield-chintz patterns had an ill-fitting thrift-shop look to them. A curiosity-cabinet sweater of appliqué birds, serpents, coral and blooms went with a nude shin-skimming lace skirt and some Cro-Magnon Birkenstocks. The remade Gucci girl, just like the one in the Guess Who song, has come undone.

Michele’s romantic kookiness is an about-face signalling that a new man is in charge. But he is also in lockstep with an industry-wide phenomenon that even influenced the classically stylish Dior and the heretofore beacon of minimalism, Céline: Phoebe Philo adorned her sensible shoes with vintage gewgaws, and her dresses and coats were festooned with ribbons and pom-poms.

The fashion is maximalist, and so is the emotion. A thread of drama and lunacy runs through the collections – one pull and the whole thing falls apart. The hints are broad: the torn stockings at Nicole Miller; the girl desperately clutching her paper-bag purse to her chest at Maison Margiela; the Norma Desmond tragedy of long lace gowns and tartan coats with mismatched balloon sleeves at Marc Jacobs. Madness hangs over the fall/winter runways like the cobwebs in Miss Havisham’s dining room. The sartorial subtext of breakdown is everywhere, in the undone Mary Janes and loose threads at Maison Margiela where trousers looked like they were literally coming apart at the seams.

READ MORE: Are you a fauxcentric?

Although Little Edie Beale and Big Edie Beale, heroines of the 1975 documentary Grey Gardens, weren’t specifically named by any designers this season, no one exemplifies this runway spirit of style in the face of adversity better. Through the ’70s, Little Edie and Big Edie lived in secret squalor in a decaying mansion in East Hampton, N.Y. Though they were close family relations of Jacqueline Bouvier Kennedy Onassis, mother and daughter lived an unhinged, hand-to-mouth existence amid stray cats and piles of garbage. Yet the Beales remained unerringly stylish in their big sunglasses, brooches and ratty furs. “You can always take off the skirt and use it as a cape,” says Little Edie in the film.

With her head done up in Hermès scarves to hide baldness, Little Edie has a resilience that is fascinating and clearly nurtured by madness. It’s a wackiness that has a special drawing power this season. “I’m rather interested in celebrities who melt down and have to reinvent themselves,” says L.A.-based German designer Bernhard Willhelm. “Take Britney Spears. She got interesting again because she had a breakdown and had to start over. I feel the same as a designer…. [Designing a collection] is like psychotherapy. You have to get it out.” Willhelm is a long-time connoisseur of crazy; his fall/winter collection is a fabulously weirdo mishmash of colours, fringe, mukluks and XL zippers, all staged as a theatre of the absurd.

The moral of this season’s new sartorial story is “All is not lost when things fall apart.” We flirt with disaster because it’s liberating. Madness is creativity, one of the most enduring tropes in the history of art, and fashion has turned deliciously folle again after many seasons of sober rationality. Trend tracker Lidewij Edelkoort foresaw madness in the cards last summer: “We’re fed up!” she said. “We need to go bonkers! We want to be happy…. After the ‘bland’ period, it will become inviting to be eccentric again.” In other words, it’s time to let your wardrobes run wild and fly your freak flag high. This season, weird is wonderful.

READ MORE:
Our favourite images from the Fall 2015 fashion campaigns
These French women are giving us full-on wardrobe envy
It’s the season of the stylist 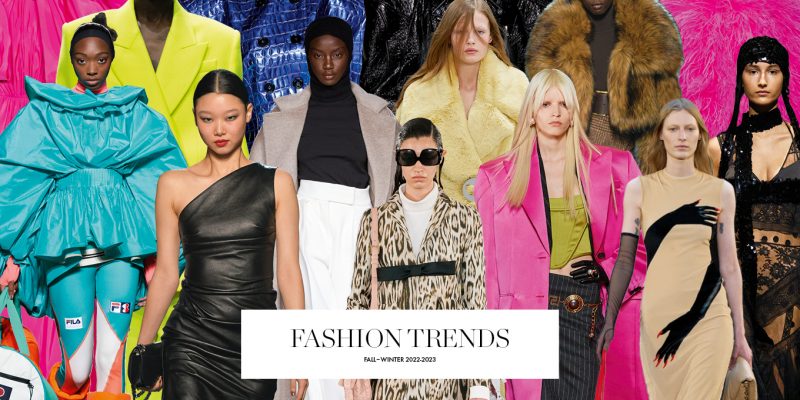