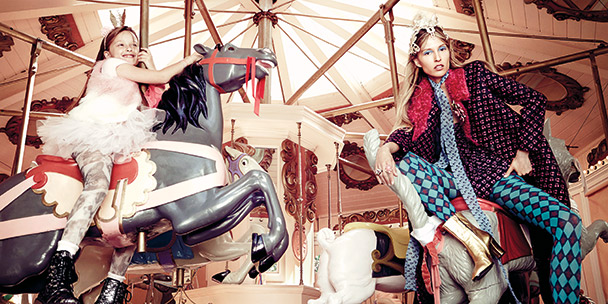 Novelist Emma Hooper imagines the story behind the characters in our September issue fashion shoot. Scroll to the bottom to see all of the images from the shoot. You’re in for a wild ride!

For my 10th birthday, I asked for an inter­national ­law textbook. I didn’t get one. Instead I got 100 pink balloons, a full ­sized carousel and a brand­ new ballet out­fit, even though I’ve never had lessons. Some kids dream of running away to the circus; I dream of running away from it.

I have no dad. Not anymore, anyway. He left when I was two. Fire­-eating – like my mother, like me – had been a passing fancy. The note he left said: “I’ve gone to law school. Please don’t try to find me.” It didn’t say anything about me.

What I have instead of a dad is a mom and a grandma and Aunt Sanddune and Uncle Zephyr and his girlfriend, Ocelot, and all the people who come to the house every Friday and Saturday and Sunday when we are Open and Business Is Good. That’s when I put on my ballet clothes and dance in the garden, even though I don’t really know ballet. I just do moves I think real ballerinas would do and imagine that someone in the cot­ton­-candy­-eating, lemonade ­drinking audience is my father. That man in the khaki shorts holding the hand of a just­ normal woman in jeans. The balding guy pushing a stroller with a baby. I look them in the eye and dance as beautifully as I can, until they wander off toward Ocelot’s accordion show or the fortune teller who is actually Grandma or the contortionist who is ac­tually Uncle Zephyr. They never stay in the garden for very long.

READ MORE: Women on the verge

Before the doors opened on the day after my birthday, I told everyone that I was leaving. That I was going to find my father.

“The law firms,” I said. “Downtown.” I would look all day during normal business hours, and if I still didn’t find him I’d hitchhike to the next town big enough to have lawyers.

Then you’ll probably be back by six?” asked Uncle Zephyr.

“Or maybe six­-thirty, if some of them are workaholics….” said Ocelot.

Beside her, my mother nodded. “Yes,” she said, quietly. “Yes, we’re coming with you.”

They put a “Closed for Family Emergency” sign on the door, and a bowl of free un­inflated balloons underneath for dis­appointed customers, and went off to get ready for adventuring. Grandma got sunglasses that made her eyes look like a fish’s, Mom and Aunt Sanddune got matching fake­ fur jackets in pink and yellow, Uncle Zephyr got a brown cowboy jacket with dangling frills all up the front and back, and Ocelot got a neck­lace made of hundreds of fake pearls stuck together into one giant fake­pearl ball. She tried to bring her accordion, strapped around her arms like a backpack, but it kept bumping the pearl ball so she had to leave it behind. I found my most normal jacket, dark denim, and put it on over my ballet things.

READ MORE: Are you a fauxcentric?

People thought we were a parade. They lined the sidewalks to watch us pass, and some clapped. Little kids gave us high­-fives. We walked in a line all the way to the first law firm, in a building that was all square and glass. “Do you want to go in by yourself?” asked my mother. Her yellow faux fur brushed my arm.

“Okay,” she said. “Then you should know, Lily, that your father’s real name is Henry, not Flames Inferno – Henry Dowell.”

They all stayed in the lobby while I took the elevator up. Grandma distracted the security guard by telling his fortune.

My father wasn’t there. He wasn’t at any of the next six firms, either. Or the next six after that. But then, at a firm in a tall square glass building, a woman all in navy cocked her head and said: “Henry? Henry Dowell? Yes, I think he does work here. Here, follow me.”

She led me down the hall, away from the bright lighting, to where it was dim. At the end of the hall, she stopped at a door that said “Custodian” on it and smelled like lemon bleach. “There you go,” she said and left. I lifted my hand to knock but didn’t. I just held it there, breathing in the lemon, the bleach.

When I got back downstairs, my mother asked, as always, “Did you find him?”

“…And then you’ll die of heat exhaustion,” said Grandma, finishing up with the security guard before turning to me. “On to the next?” she said. It was five­-forty-­five.

“Yes, done,” I said. Everyone was looking at me. Mom, Grandma, Uncle Zephyr, Aunt Sanddune, Ocelot.

READ MORE: It’s the season of the stylist

“They…” I said, swallowing, “they told me about him. About Dad. That he used to be a lawyer, but then he ran off. That, now, he is off with another circus, swallowing fire. In China. Far, far from here. Too far for us to go.”

We paraded back down the streets to our house, and people watched and clapped and gave us high­-fives and Mom said to me, “You know, I guess that means he’s still Flames Inferno after all, not Henry Dowell.”

“Yes,” I said. “It is.” I used one hand to high-­five a toddler in a stroller and, with the other, held my mom’s, yellow faux fur brushing against my wrist with every step.

For more from Emma Hooper, check out her debut novel, Etta and Otto and Russell and James, which was published in January 2015.

READ MORE:
11 fashion pieces you need to add a little eccentricity to your wardrobe
Our favourite images from the Fall 2015 fashion campaigns
Here’s how to make lingerie part of your daytime look