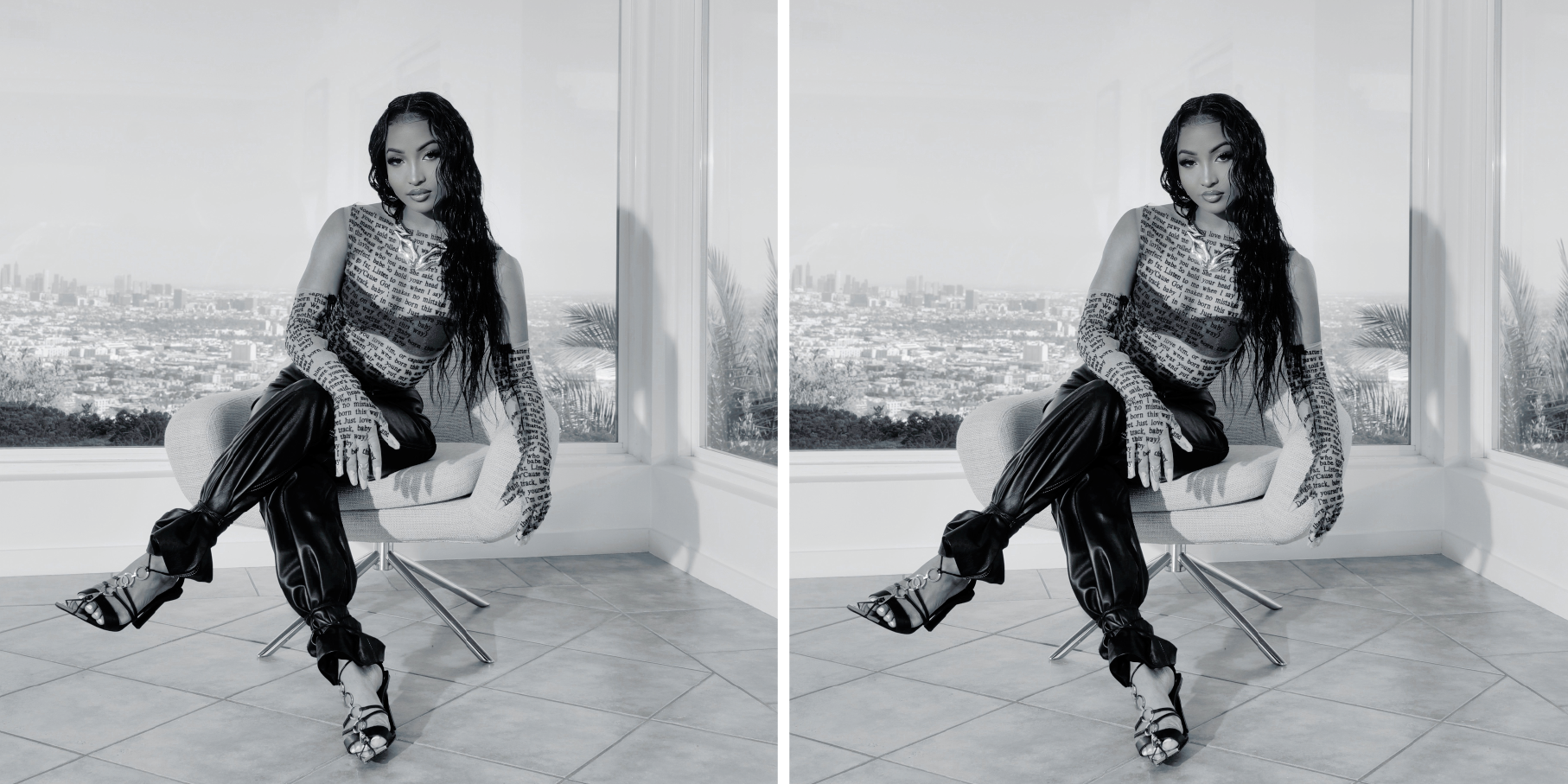 It’s impossible not to feel like a bad bitch when listening to Shenseea. The Jamaican artist’s lyrics are rife with sexual liberation, and her throaty voice is filled with brash confidence. Her mind and body are her own, and she inspires listeners to reclaim their agency too. She’s continuing the legacy of her dancehall foremothers like Lady Saw, Sister Nancy and Patra. Her debut album, Alpha, released in March, has themes of female empowerment and sexual freedom woven throughout. “I try to motivate women to be strong and to follow their intuition,” she told me over Zoom before a sold-out show in London, England. “In the type of world we live in, you’ve got to have a mind of your own. When I write songs like “Rebel” or “Shen Yeng Anthem,” I’m portraying this dominance.”

Shenseea, born Chinsea Lee, was raised by her mother and aunt in Mandeville, Jamaica. The two women instilled in her an unwavering sense of self, and the 25-year-old has carried that confidence into her songwriting. Legacy is something Shenseea is always contemplating: the legacy of her island and music but also her own legacy and the lessons she’ll be leaving behind for young women. She seems deeply aware of her responsibility to be a good role model for her younger fans, knowing that some look to the people they admire for the guidance that they don’t get at home. “I want to share what I’ve learned with those who didn’t have the kind of upbringing I had,” she says. “When I’m writing, I think about the people who lack mother figures in their family. I want to teach them how to be independent.”

Shenseea has become a force in dancehall by mixing her family’s influence with what she learned from watching her idols, Nicki Minaj and Rihanna—like the importance of writing her own lyrics and living life with “boss energy.” Between collabs with Kanye West, Christina Aguilera and dancehall royalty Vybz Kartel and ubiquitous hits that get played by DJs worldwide, Shenseea has cemented her status as an international representative of the genre.

But now, after releasing dancehall singles over the past five years, she’s ready to step beyond the limits of the genre. On Alpha, she showed off her chameleon nature, and singles like “Deserve It” left some fans in shock. Though the album’s pop leaning production and incorporation of hip hop and a little country sounded like new ground for the artist, it’s an arena she has always wanted to play in. When she was growing up, dancehall and reggae weren’t often heard in her household. She listened to pop, R&B and soul: Whitney Houston, Michael Jackson, Céline Dion and the Isley Brothers. 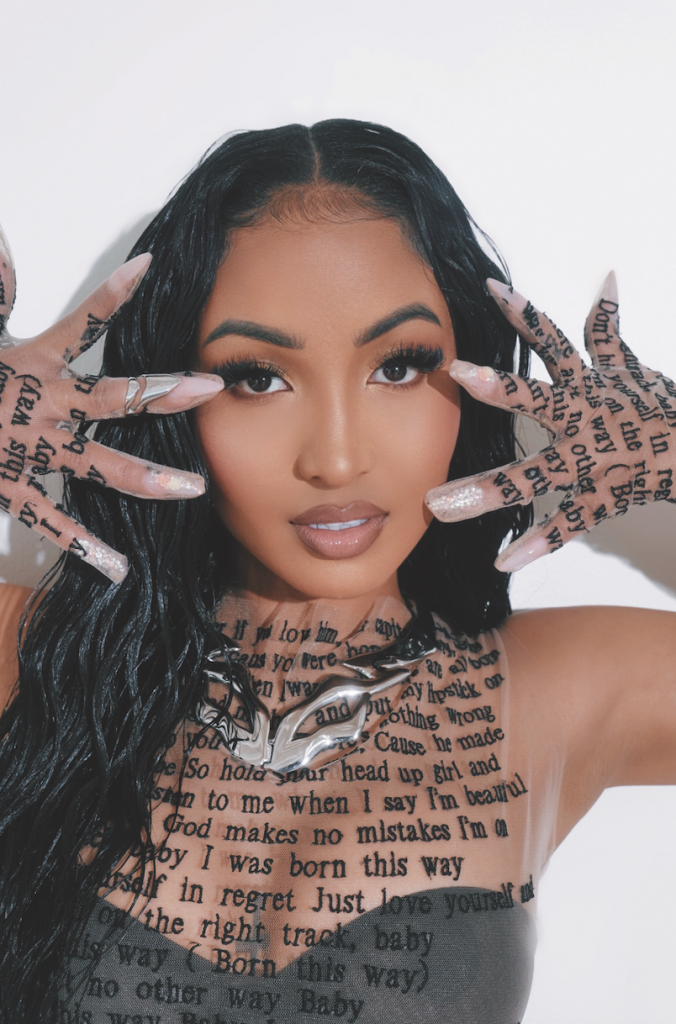 “When my mom died, that woke me up. It reminded me that I’d said I wanted to be at a certain stage after five years.”

When she was younger, Shenseea dreamed of being a pop singer. But when she first started recording music, she was advised to make culturally relevant music, meaning dancehall and reggae. She heeded that advice but all along told herself that after five years, she would put out the kind of music she’d always wanted to make. “I feel like with the singles that I put out [on Alpha], people were kind of confused—like, ‘Oh, she’s trying to be somebody she’s not,’” she says. “[They didn’t realize] that the whole album is trying to show that these are different sides of the person I am.” Alpha explores all these sides while still remaining true to her roots, with Megan Thee Stallion, Offset, 21 Savage, Beenie Man, Sean Paul and Tyga all making appearances. “Lick” gets raunchy and has a sickly sweet beat; “Henkel Glue” has an old-school dancehall vibe; “Body Count” has a smooth, undulating R&B flow; and “Hangover” slips into country territory with lilting acoustic guitar.

To outsiders, it may seem like Shenseea sold out to cross over, but she just levelled up to where she’d always planned to be. After her mother passed away in June 2020, something dormant within the singer sprung to the surface again. She had been so absorbed in her constant output that she lost sight of her bigger plan—until she was forced to slow down. “I’d always been in a fast lane, just working 24-7, dropping a new song every two months,” she says. “When my mom died, that woke me up. It reminded me that I’d said I wanted to be at a certain stage after five years.” Stepping back and reassessing led Shenseea to create her most explorative music yet. At the same time, she stresses that she’ll never stop making dancehall it’s just that she wants the space to create more.

Dancehall itself has stagnated outside of the Caribbean. The world has years of catching up to do when it comes to the genre. Even in a city like Toronto, which has a huge Jamaican-immigrant population, it’s still the oldies that get the most reaction at a bashment party. Dancehall’s global progression is stuck in the early 2000s. “I feel like it’s been on pause for a very long time,” says Shenseea. “But now it’s picking back up, and I’m happy to see that because I know I played a role in that. Since the early days of Shaggy, Sean Paul and Beenie Man, nobody new has come after them. When I go anywhere in the world, they’re still playing these songs that we’re not even playing in Jamaica anymore.” Dancehall and reggae influenced genres like hip hop, reggaeton and Afrobeat, which are, internationally, three of the most popular styles of music right now, and Shenseea wants to see her island get the credit for that influence. “Jamaica has played a major role in the creation of other genres,” she explains. “Hip hop is one of the biggest genres right now. That’s what I want for dancehall.”

“We likkle but we tallawah” is a saying in Jamaica that means we might be a small nation, but we’re strong and our influence is mighty. Now it’s the turn of Shenseea, along with her contemporaries, like Spice, Skillibeng, Jada Kingdom and Skeng, to make strides for the culture. And this new vanguard of Jamaican artists is bringing dancehall into the future.