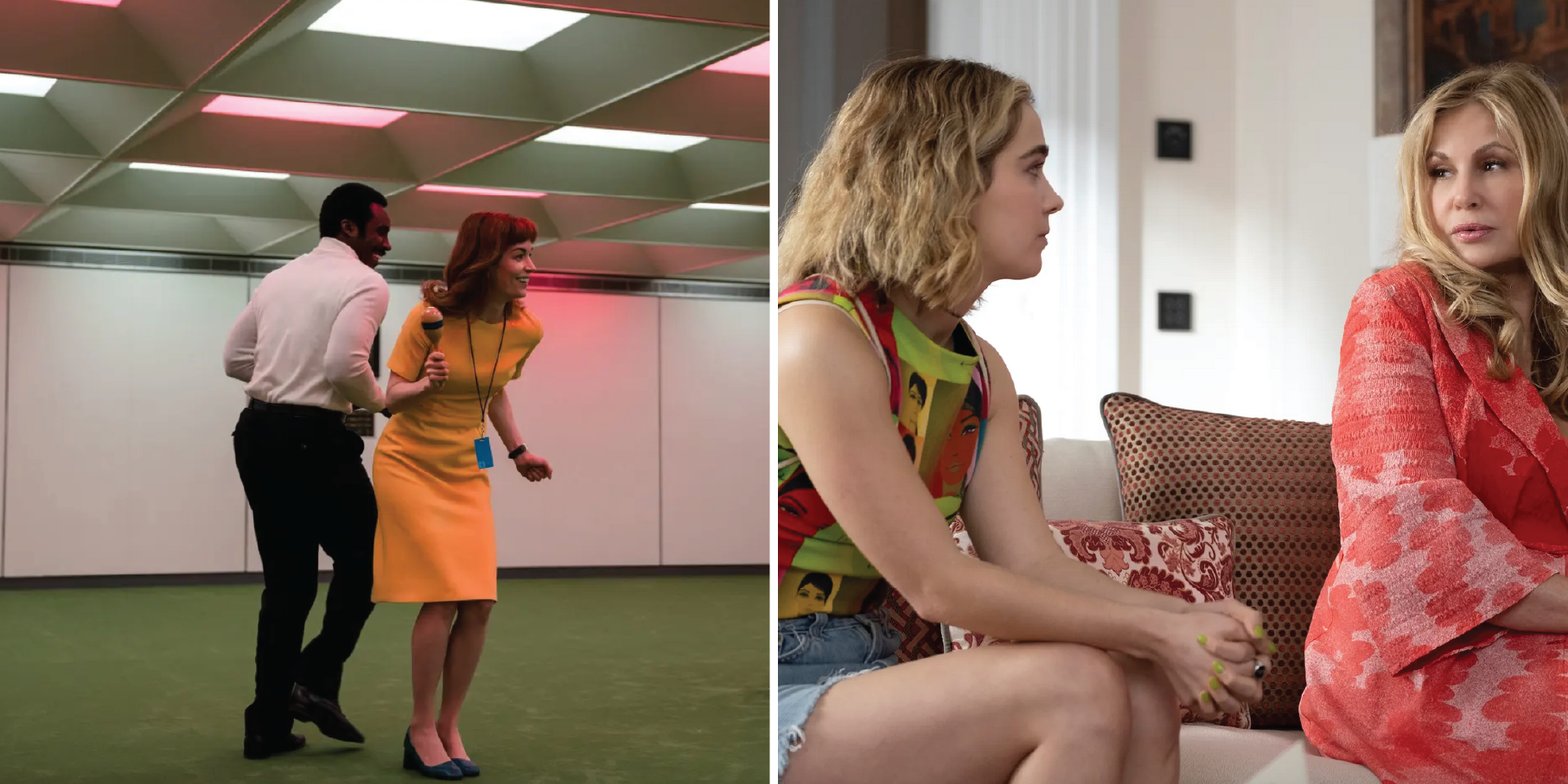 During yet another year of non-stop TV, finding the shows that are worth your time can be a challenge. But still, a few titles managed to stand out among the rest. Read on to discover the best shows of 2022, sorted in alphabetical order because the idea of actually ranking them gave me a headache.

A League of Their Own

A League of Their Own, like every show on this list, is not without its flaws. The characters, for example, all speak as if they are frequent users of the internet even though the dramedy is set in the ‘40s, but I digress. An adaptation of Penny Marshall’s iconic 1992 film of the same name, the series follows a group of women who form the first all-women professional baseball league during the Second World War. Co-created by star Abbi Jacobson, the series does what so few reboots/remakes/revivals dare to do: Be bold. It does not shy away from past issues, carving out multiple storylines for Black women (most of which are centred around the wonderful Chanté Adams’ talented yet overlooked pitcher Max), who were left out of the original film. The show is also unabashedly, delightfully queer, exploring what that means to multiple characters in different ways. It is kind-hearted and earnest in the best way, and feels like a warm cup of tea on a gloomy day. I hope we get to see more of it.

Watch it on: Prime Video

Early on into Abbott Elementary’s run, you could tell that you were watching a classic in the making. From the very first episode, the now-hit comedy, about an eclectic group of teachers working at an underfunded Philadelphia public school, was laugh-out-loud funny and self-assured. Showrunner and star Quinta Brunson—who you may have already known from her viral content at BuzzFeed Video—shines as the eager and well-intentioned Janine, but she’s also surrounded herself with all-star talent, including Emmy-winner Sheryl Lee Ralph as veteran teacher Barbara, the charming Tyler James Williams as school newcomer Gregory and comedian Janelle James as unpredictable principal Ava. There’s nothing funnier on TV right now, and the show is still just getting started.

Watch it on: Disney+; new episodes air weekly on Global

Andor is the best Star Wars has ever been—and it doesn’t even need Baby Yoda to get there. Serving as a prequel to the 2016 spin-off film Rogue One (which also means it technically comes before the events of A New Hope), with Diego Luna returning to his role as thief-turned-Rebel spy Cassian Andor, the show is clever, resonant, rousing and surprisingly moving. Creator/writer Tony Gilroy (The Bourne trilogy, Michael Clayton) seamlessly translates his skill for and interest in taut thrillers that interrogate political control to the sci-fi franchise. As Cassian slowly starts to align himself with the rebellion, viewers can feel the fiery resolve rising within, and are right there with him. Best of all? You don’t actually have to be a Star Wars diehard to get into the show. At its heart, it’s about real-feeling stories with grounded characters who just so happen to live in a galaxy far, far away.

You probably haven’t seen anything quite like Mo on TV. Created by star Mo Amer and Ramy Youssef (Ramy), the comedy follows a Palestinian refugee living in Texas who, along with his family, is seeking asylum and citizenship in the U.S. We follow Mo on this journey, as he tries to navigate both his Palestanian and Texan identities, encountering various highs and lows along the way and depicting what feels like an authentic, very specific experience. It doesn’t hurt that the show is also quite funny, either. It seems like Mo is a series that got lost in the glut of streaming this year, but don’t let that stop you from discovering it now.

Watch it on: Netflix

Pachinko is a show that will make you feel all the feelings—often over the course of a single episode. Based on Min Jin Lee’s 2017 bestselling novel of the same name, the historical epic tells the story of four generations of a Korean family who immigrated to Japan during a time of political turmoil. Largely unfolding through the perspective of Sunja (played by both Kim Min-ha and Oscar-winner Youn Yuh-jung at different points in time), we see the hardships the family must face, though their desire to thrive and live full, meaningful lives never wavers. Every element of the drama—from the way it is shot, to the writing, the acting, production design and buoyant opening credits—is absolutely stunning and deserves so much more recognition.

Watch it on: Apple TV+

If I could only use one word to describe Reservation Dogs—Sterlin Harjo’s comedy about a group of Indigenous teens being, well, teens in rural Oklahoma—it would be “special.” That’s what it is like to watch every episode of this show: You are filled with the overwhelming sense that you are watching something so very special. Already excellent in its first season, Reservation Dogs somehow came back even better in season two. Both the jokes and the emotional moments hit even harder, and the portrait drawn of a place and community feels so much more alive and vivid. This season, most characters also gets a moment to stand out all on their own—Elora (Devery Jacobs) goes through grief as she loses her grandmother, Willie Jack (Paulina Alexis) reconnects with her ancestors, the Aunties get to let loose—making you feel all the more connected to them. The series has grown with tremendous depth, and I can’t wait to see how it continues to evolve.

When talking with a friend about Severance recently, she told me that it was the first show in ages that she felt like she could properly obsess over. As soon as she watched an episode of the psychological thriller—which follows a man (Adam Scott) and his colleagues who have had their work and non-work memories surgically separated, creating two different identities within themselves—she felt compelled to immediately discuss it with others and look up theories. Every episode occupied her thoughts until the next one aired a week later. And that’s exactly what it is to watch Severance. It is sharp, stylish, innovative and all consuming. It slowly nudges you toward the edge of your seat, holding your breath, because you never know what’s coming next.

Watch it on: Apple TV+

If you haven’t heard of Somebody Somewhere, that’s okay. The dramedy debuted in January on HBO to critical acclaim but little fanfare. Bridget Everett stars as Sam, a woman who returned to her Kansas home to take care of her ailing sister and now must deal with the grief of losing her as she struggles to find her place in the small town. When she reconnects with an old, forgotten classmate, she finds a welcoming community of outsiders, unlocking a whole new world for her. The show is quiet, intimate and never in your face—it kind of just exists as is, and that makes it all the more lovely. If you’re looking for something to watch during downtime this holiday season, this is where you should start.

Watch it on: Crave

CBC dramedy Sort Of—about Sabi Mehboob (Bilal Baig), a non-binary millennial juggling their many identities, including child to Pakistani immigrants, nanny to two kids and bartender at an LGBTQ bookstore/café— was one of my favourite things I watched last year. Co-created by Baig and Fab Filippo, the show could have stuck to the same formula it honed so expertly in season one, and I would have been happy. Instead, they pushed. This second season has the same tenderness and generous spirit, but now finds a slightly more assured Sabi as they take more control over their multiple jobs, navigate a complicated relationship with their father (who has just returned to Canada after learning of Sabi’s non-binary identity) and search for a “normal” kind of love. I consider it required viewing.

Watch it on: CBC Gem

Every good thing you’ve heard about The Bear—and I’m sure that, by now, you’ve heard a lot—is true. When the show, following a young chef (Jeremy Allen White) who leaves fine dining to run his family’s sandwich shop in Chicago after a terrible loss, exploded in popularity online when it debuted in the summer, praise for it was inescapable. But the tense dramedy wasn’t available to watch in Canada at the same time it dropped in the U.S., and I had convinced myself that there was no way it could live up to the hype. I was wrong. Every scene sizzles, anger, grief and love simmering under the surface until it all boils over. After a frenetic, stressful (Uncut Gems, who?) penultimate episode, which was filmed in one shot, the finale ends in as perfect a place as you could ask for: a fitting, meaningful end to the story that had just unfolded over the course of the first season, but setting you up for a clear, hopeful vision of all that is still possible.

The first half of 2022 saw a number of real-life-inspired dramas about scammers and too-good-to-be-true tech businesses. The Dropout, about the rise and fall of Theranos founder Elizabeth Holmes, is the best of the bunch. Amanda Seyfried gives an all-time great performance as Holmes, while creator Liz Meriwether (New Girl) crafts the story with intelligence and care. Although the events of the drama are all recent history (Holmes had just been found guilty of fraud in January), the series still manages to feel fresh, bringing new insight to what happened. You can almost understand how Holmes pulled off the con for so long—until you remember just how outrageous all of it really was.

I have a confession: I didn’t love the first season of The White Lotus. Sure, I saw how meticulously constructed it was under writer-director Mike White’s leadership (I thought it was so well made that it still made my “best of 2021” list), but when the final credits rolled, I still felt cold. Season two—which follows an almost entirely new group of moneyed vacationers at a luxe Sicilian hotel, and is more focused on sex, power and transactional relationships—has completely leveled up. Admittedly, I am taking a risk by proclaiming so before anyone actually sees how it ends, but through episode five, it has been more fraught and delicious. Yes, it has its issues (I have doubts about mirroring the first season by starting with a mysterious death, and the return of Jennifer Coolidge’s Tanya feels unnecessary), but season two has just been intoxicating. I may regret being so effusive with my praise after the finale, but, hey, it’s about the journey, right?

Watch it on: Crave

Read more:
These Are the Best TV Shows of 2021
Is This the End of TV Binge Watching?
Your TV Show ‘It’-Girl, According To Your Star Sign