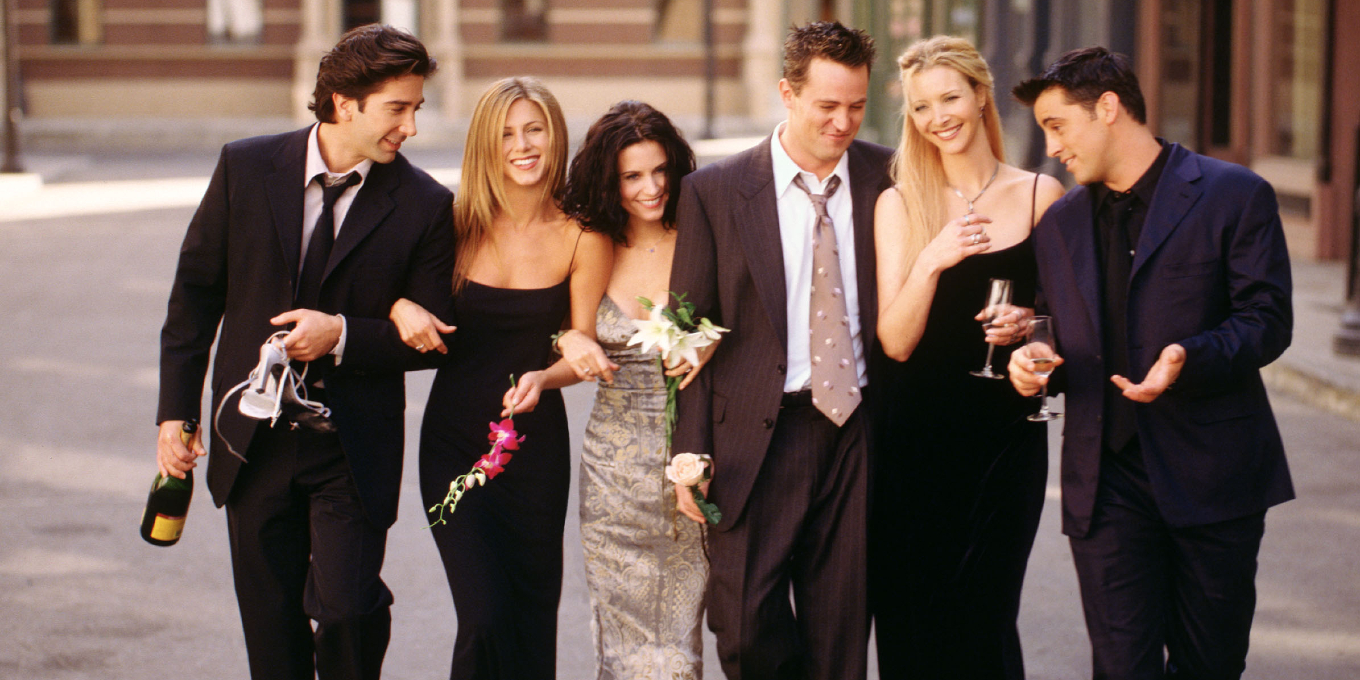 In a world rife with revivals and reboots, there’s one that got away: the mythical Friends reunion. Ever since the six pals walked off into the Central Perk sunset, viewers have been waiting patiently for a hint of their return and feverishly rewatching the series. (Which explains the apocalyptic reactions to all 236 episodes leaving Netflix on January 1, 2020.)

But there’s good news for Friends fans. A long-awaited HBO Max reunion is finally on its way. Matthew Perry tweeted in November that the reunion was scheduled to film in early March, and in late March, David Schwimmer confirmed to Graham Norton that he was flying to L.A. to shoot. Photos from set have since leaked, and the official Friends Instagram confirmed the reunion completed filming on Saturday, April 10, 2021. Now, we have our first glimpse at the comeback with a short teaser trailer.

Ahead, read everything we know about the Friends reunion.

The special will drop in May.

Which is much sooner than anticipated! In a new teaser trailer—which, admittedly, doesn’t give us much other than a glimpse at the cast walking away from the camera—HBO Max revealed the episode will drop on May 27. See the full teaser below.

There will be a small scripted element, but for the most part, the cast will appear as themselves—not in character.

In an April 2 interview with Graham Norton, David Schwimmer told the talk-show host he was leaving for Los Angeles to begin filming the special.

“I’m going to Los Angeles. We’re going to be shooting the Friends reunion next week,” he said. “I’m hopping on a plane this afternoon, this evening. And yeah, gonna see everyone next week for the first time in many years.”

He added that the whole cast will appear as themselves instead of their characters: “I’ll be myself. I’ll be David. There’s nothing scripted; we’re not in character. We’re all ourselves, the real people, although there is one section of it that I don’t want to give away, but we all read something.”

During a June 2020 virtual reunion between Aniston and Kudrow, the pair remained mum on reunion plans. “Yeah, we don’t know everything about it, we need to say,” Kudrow explained during the Variety Actors on Actors segment. “I think we’re meant to be surprised by some things as well.”

They did confirm, however, that the special isn’t scripted. “I will not be Phoebe,” Kudrow stated. Aniston added, “I will not be Rachel, although I kind of am. Well, we’re all sort of little fragments of them.”

The episode will feature an…interesting array of guest stars.

Including, perhaps most importantly, BTS!

Photos from set have leaked, if you want a sneak preview.

The series’ original production designer, Greg Grande, shared photos of the set he’s recreating for the reunion on Instagram, right down to the turquoise cabinets.

On April 11, TMZ reported the reunion will include shots from the iconic fountain in the Friends opening credits. Additionally, the live audience element was mostly comprised of paid actors who were COVID-tested for safety ahead of filming.

Principal photography for the project wrapped on April 10, 2021.

On April 10, the Friends Instagram account posted that the production team had finished principal photography, meaning the bulk of filming is done.

“That’s a wrap! 🎬 Could we BE anymore excited!? Friends: The Reunion is coming to @hbomax,” the account posted, tagging all the actors.

Matthew Perry posted a photo from set that was quickly deleted.

One Friend got a little ahead of himself. On Friday, April 9, Perry posted a rather innocuous photo from his makeup chair on set of the reunion. “Seconds before eating a makeup brush,” the actor joked, per TMZ. “Not to mention reuniting with my Friends.” The image was quickly deleted.

The reunion was officially announced in February 2020.

The special was untitled and would be unscripted, with filming taking place at Friends‘ original soundstage, Stage 24, on the Warner Bros. Studio lot in Burbank.

“Guess you could call this the one where they all got back together—we are reuniting with David, Jennifer, Courteney, Matt, Lisa, and Matthew for an HBO Max special that will be programmed alongside the entire Friends library,” Kevin Reilly, chief content officer, HBO Max and president, TBS, TNT, and truTV, confirmed in a statement. “I became aware of Friends when it was in the very early stages of development and then had the opportunity to work on the series many years later and have delighted in seeing it catch on with viewers generation after generation. It taps into an era when friends—and audiences—gathered together in real time and we think this reunion special will capture that spirit, uniting original and new fans.”

Each original Friends cast member confirmed the news on Instagram, captioning the same group shot, “It’s happening…” to the thrill of fans around the world.

In November 2020, Perry casually tweeted that a filming schedule for the HBO Max special has been set. “Friends reunion being rescheduled for the beginning of March. Looks like we have a busy year coming up. And that’s the way I like it!” he wrote.

Friends reunion being rescheduled for the beginning of March. Looks like we have a busy year coming up. And that's the way I like it!

The reunion was previously a “maybe,” reportedly because of money.

Deadline reported in January 2020 that a previously-planned HBO Max reunion with all six cast members and co-creators/executive producers Kauffman and Crane was at “a standstill.” In the report, Deadline attributed the PIVOT(!) away from an unscripted special to negotiation issues. Allegedly, producing studio Warner Bros. TV and the OG cast members were “far apart on money.” Like, an eight-figure gap, sources told the outlet.

“There is interest all around and yet we can’t get the interests all alighted to push the button on it,” HBO Max’s Chief Creative Officer Kevin Reilly said about the reunion special at the Television Critics Association press tour on Wednesday. “Today it’s just maybe.”

In the past, getting the gang together was shut down.

As it turns out, there was reason to be skeptical about an official reunion with Rachel, Ross, Joey, Monica, Phoebe, and Chandler. Ever since the popular sitcom ended in 2004, the creative team has been steadfast about not returning.

Nearly everyone who breathed near the soundstage where Friends shot has dodged questions about a revival. And as recently as 2019, those involved were still shutting down rumours. During a Friends 25th anniversary panel at Tribeca TV Festival in September, Kauffman and Crane nixed ideas of a scripted return.“We will not be doing a reunion show, we will not be doing a reboot,” Kauffman said. “The show was about that time in life when friends are your family,” she explained, adding that the characters are in a different place with their own families.

As for a reboot, à la Gossip Girl, Kauffman said, “It’s not going to beat what we did.” Crane added, “We did the show we wanted to do. We got it right, and we put a bow on it.”

Each cast member has spoken out against a return before.

In 2018, Schwimmer had this to say about a reunion/reboot: “Look, the thing is, I just don’t know if I want to see all of us with crutches [and] walkers.” That same year, Kudrow told Conan O’Brien, “They’re rebooting everything. I don’t know how that works with Friends, though. That was about people in their twenties, thirties. The show isn’t about people in their forties, fifties. And if we have the same problems, that’s just sad.”

Cox reiterated those statements, telling People, “I don’t see it happening.” LeBlanc simply put it, “When that period is over, it’s over.”

And in 2017 Perry even referred to the idea as a “nightmare” during a Vanity Fair interview:

“I have this recurring nightmare—I’m not kidding about this. When I’m asleep, I have this nightmare that we do Friends again and nobody cares. We do a whole series, we come back, and nobody cares about it. So if anybody asks me, I’m gonna say no. The thing is: we ended on such a high. We can’t beat it. Why would we go and do it again?”

About That Sex and the City Reboot: Everything We Know About And Just Like That
Barry Jenkins and the Cast of The Underground Railroad Discuss the Must-See New Series
Emily in Paris Season 2: Netflix Confirms New Season – Here’s What We Know so Far