About That Sex and the City Reboot: Everything We Know About And Just Like That

It's happening. Sex and the City is coming back. In January, news broke that the popular early aughts HBO show would be continuing HBO Max in a revival called And Just Like That…

In an interview with Vanity Fair, Sarah Jessica Parker, who famously walked the streets of Manhattan in her Manolo Blahniks for six seasons and two movies, said she’s anxiously awaiting what showrunner Michael Patrick King and the otherwise all-women writers’ room is cooking up.

“I think that Cynthia [Nixon], Kristin [Davis], and I are all excited about the time that has passed,” she said. “You know, who are they in this world now? Have they adapted? What part have they played? Where have they fallen short as women, as friends, and how are they finding their way? Did they move with momentum? Are they like some people who are confused, threatened, nervous [by what’s happening in the world]? I’m so curious and excited to see how the writers imagine these women today.”

You’ll notice that Parker named herself, Nixon, and Davis, but omitted the name of the fourth star of Sex and the City, Kim Cattrall. This was, of course, a purposeful move. When HBO Max announced the SATC revival, Parker confirmed on Instagram that Kim Cattrall (Samantha Jones) would not be joining the cast for this project.

“No. I don’t dislike her. I’ve never said that. Never would,” Parker said, refuting a commenter’s claim that the two “dislike each other.” She went on: “Samantha isn’t part of this story. But she will always be part of us. No matter where we are or what we do.” The commenter was referring to the infamous rumored feud between Cattrall and Parker.

That juicy gossip aside, here’s what else we know about the HBO Max revival. 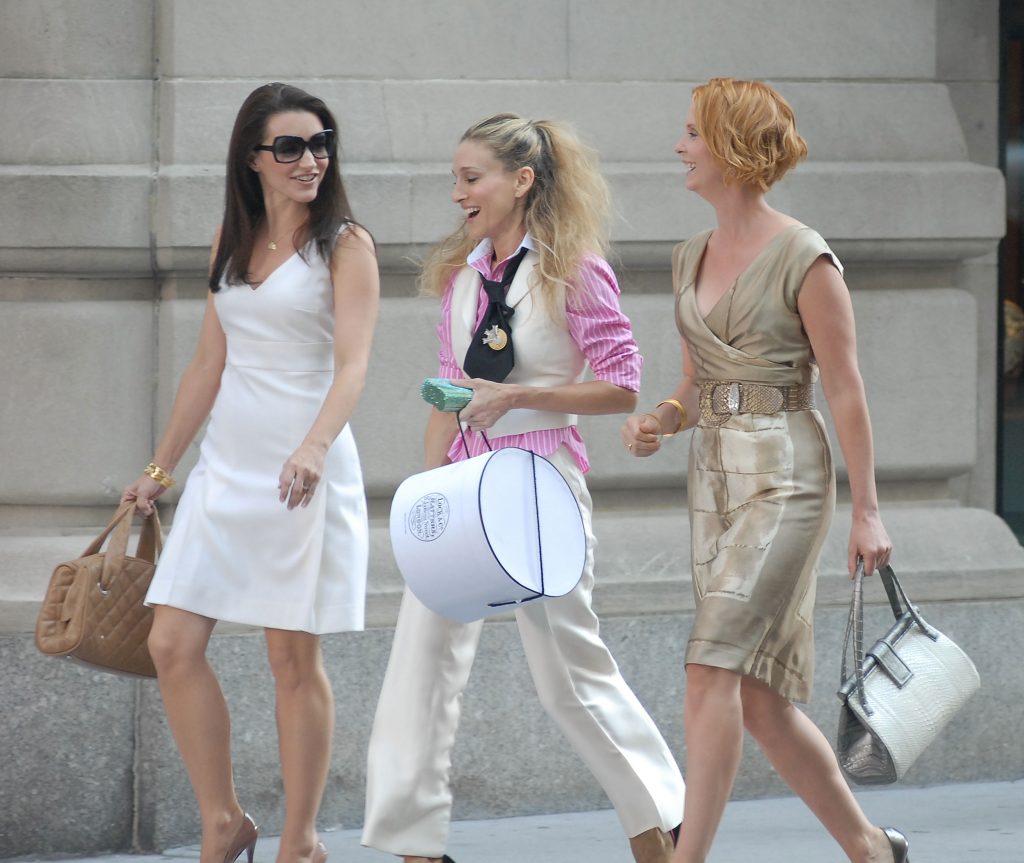 There will be 10 half-hour episodes.

Parker, Davis, and Nixon are signed on as executive producers of the new show, per The Hollywood Reporter. So far, this is slated as a limited series, but if we know anything about the seemingly endless stamina of Carrie Bradshaw and co., it could continue way past the 10 episodes HBO Max has currently green-lit.

The writers’ room has begun working.

Us Weekly reported in late February that the writers’ room opened in January. As Vanity Fair also reported, the writers’ room is made up entirely of women, and Parker referred to the writing staff as “incredibly diverse in a really exciting way.” She added that the staff will add “life experience, political world views, and social world views” to the series.

In February, Deadline announced members of the writers’ room include Shrill and Tuca & Bertie writer and Wow, No Thank You author Samantha Irby, who will also serve as co-producer; Parks and Recreation alum Rachna Fruchbom, who will also co-executive-produce; Twenties, Black Lightning, and Being Mary Jane alum Keli Goff, who will serve a supervising producer; and Julie Rottenberg and Elisa Zuritsky, who both worked on the original series and will serve as executive producers.

We don’t know exactly when the show is coming.

And Just Like That… does not have a release date right now, but Us Weekly says filming is beginning this spring. Obviously, COVID-19 has been a big roadblock much of TV and film production for the past year, but with vaccines well underway and lots of tricks up the sleeves of talented showrunners, filming in the time of COVID is not impossible.

COVID-19 will be mentioned in the revival.

Speaking of COVID, it doesn’t seem as if the writers are just going to ignore the pandemic, which completely devastated New York City last spring. Parker told VF that COVID-19 will “obviously be part of the storyline, because that’s the city [these characters] live in. And how has that changed relationships once friends disappear? I have great faith that the writers are going to examine it all.” This statement had some fans speculating that Samantha would die from the effects of the virus.

They are not killing off Samantha.

Fans can take a sigh of relief that their worst fears are not coming to fruition in And Just Like That… In an interview with TVLine, HBO Max chief content officer Casey Bloys seemed to indicate that the character of Samantha just goes her own way—but doesn’t die. Bloys added that, “just as in real life, people come into your life, people leave.”

He added: “Friendships fade, and new friendships start. So I think it is all very indicative of the real stages, the actual stages of life… They’re trying to tell an honest story about being a woman in her 50s in New York.”

So, looks like they just…ghosted each other? But no one is a ghost. Damn, not gonna lie, the latter would have been interesting. Can you imagine a series of unexplained events that the women eventually blame on Samantha’s ghost?

It’s still not clear if Mr. Big is coming back.

Another big casting question surrounds Carrie’s love interest, Mr. Big (Chris Noth). On Feb. 18, Page Six published a report that Noth would not be joining the reboot. But let’s not take Page Six at their word just yet, because Noth has been dropping some clues on social media.

“Everything changes—including announcements in the rags,” he wrote.

If you look at Noth’s Instagram comments, they are filled with pleads from fans to bring back Mr. Big. Guess we have to wait!

The story will follow Carrie, Miranda, and Charlotte in their 50s.

We last saw the friends in 2010, so more than a decade has passed in the friends’ lives. That goes back to what Bloys said about the women’s friendship with Samantha. It’s been a long time, everyone is in their 50s, and friendships fall off. What else is going on with the group now that they’re 50? Surely they’ve picked up some quarantine hobbies. The real question is whether we could ever see Carrie becoming a sourdough aficionado.

The franchise is used to spin-offs.

This is definitely not the first time the SATC creators have expanded the universe. If you’ll recall, The CW had a series called The Carrie Diaries based on Candace Bushnell’s prequel to her 1997 Sex and the City book. The show, which starred AnnaSophia Robb, ran from 2013 to 2014.

Of course, there were also two feature films, Sex and the City (2008) and Sex and the City 2 (2010). Will we ever see the end of these friends, this show, and Carrie Bradshaw? Not if fan power has anything to say about it. That said, if you don’t have an HBO Max subscription, it’s time to get on it.