'The Boys' New Superhero Isn't What She Seems 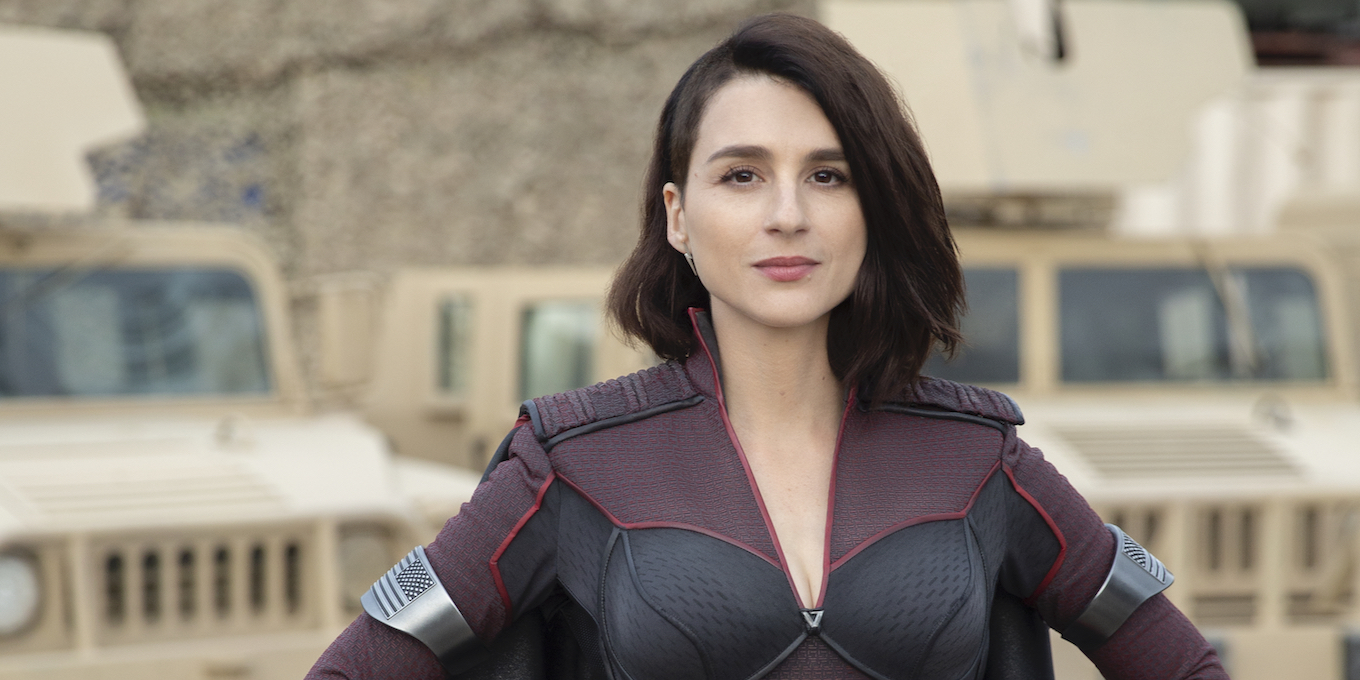 It doesn’t take long for actress Aya Cash (You’re the Worst) to make her mark as Stormfront, the newest sort-of superhero in season two of Amazon Prime Video’s action drama The Boys. She struts onto the scene, rolling live on Instagram, with the confident air of someone who not only knows she belongs but has the power to shake things up. “My nana is your biggest fan,” she quips upon first meeting Homelander (Antony Starr), her new colleague and the leader of the corporate-funded supergroup The Seven. Rage simmers behind his eyes, barely concealed for the camera, and she smirks, victorious.

Stormfront strikes again in the next episode while doing media rounds about her new gig. Facing hours of inane, often sexist questions, her press-friendly facade slips and she comes alive as the dry, quick-witted woman we got a hint of in that first scene. “Why does it matter whether heroes or have a dick or a vag? Shouldn’t we all just be competent at our jobs?” she says matter-of-factly, fellow superhero Starlight (Erin Moriarty) bursting out into shocked laughter beside her.

These scenes are meant to disarm the viewer. Finally, here is a no-nonsense woman who says what she means and can possibly be an ally to the genuinely well-intended Starlight, the outcast of the group. Stormfront has, as Cash puts it during a roundtable, an appealing “balls-to-the-wall authenticity, and a very strong belief system.” But fans of the series – especially those who are familiar with the comics – know that it’s likely too good to be true. The Boys follows two groups: The aforementioned Seven, a team of superheroes with a sinister side, and the Boys, regular citizens who have been wronged by the supes and are determined to take them down. Season two, which premieres on the streaming service on September 4, introduces Cash’s Stormfront, who, in the comics, is originally a man – and also a neo-Nazi. It’s safe to say that the on-screen version of Stormfront has a not-so-heroic agenda of her own as well.

“We gender-flipped Stormfront in part because we were trying to create Homelander’s worst nightmare,” showrunner Eric Kripke says during a separate roundtable. And what bigger nightmare for a needy, insecure man caught up in the worst trappings of toxic masculinity than a woman who does not cower in his presence? But Cash’s likeability early on in the season was also intentional. “There’s a darker side to Stormfront that will be revealed as the season goes on,” he says. “A lot of hatred these days is wrapped up in appealing, social-media-savvy packages. It’s not the old-school version of intolerance online. That’s what Stormfront represents, to an extent – we wanted the intolerance to have an attractive face before you realize what it’s really about.”

“It’s simply a reflection of the world that we live in,” Cash agrees. “There’s an outward-facing self, and then whatever is happening underneath. Stormfront is essentially a new brand of politician, and she just happens to be also a superhero. She’s using social media and the public for her own agenda. She’s more overt and conscious of how she chooses to use her fame.”

Repost from @theboystv • Who's ready for Stormfront? Not you.

And it’s with that brutally honest and unflinching ethos that The Boys was created with in the first place. At its core, the show asks what would happen in our superhero-obsessed world if elevated these people with powers to deity-like levels? The answer is obvious: Nothing good. “We’re giving these [superhero] characters this pass,” says Cash. “As both a fan and [now] a cast member, what I love about The Boys is that [explores] what it would be like to have all of this power and responsibility and how it would weigh on people and corrupt them.”

What’s On Our Pop Culture Radar This September