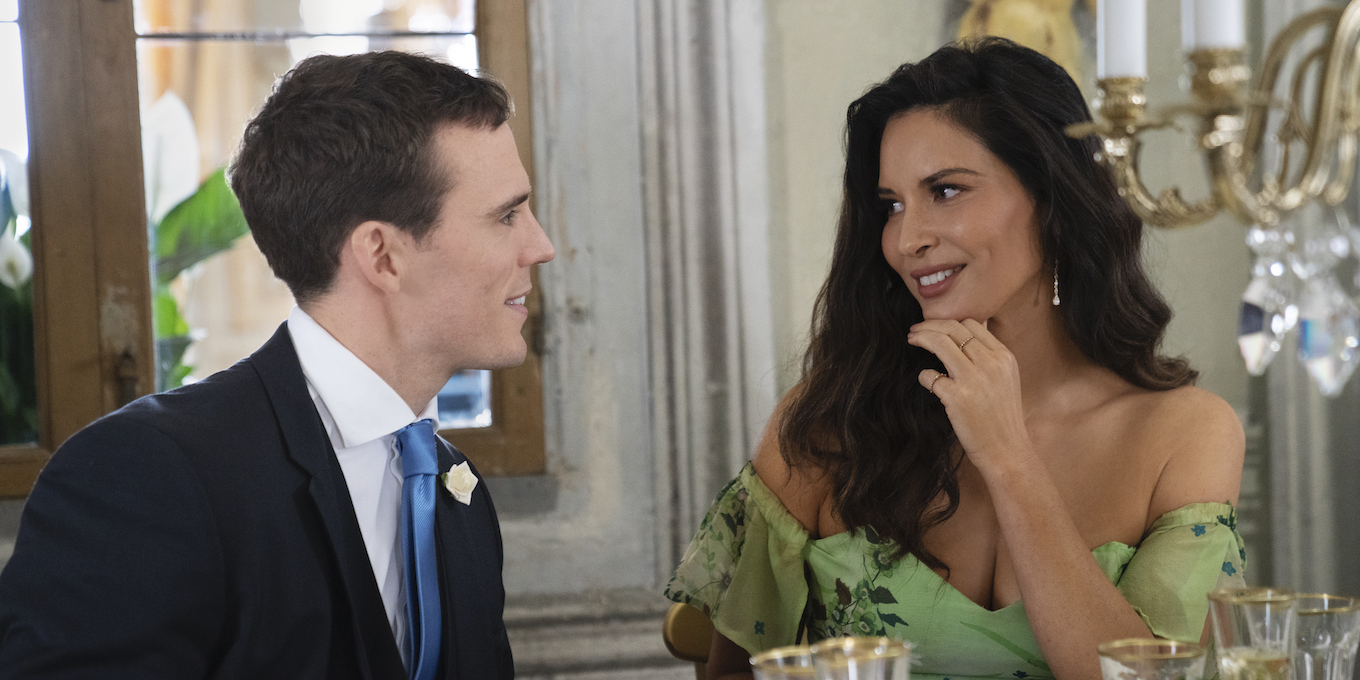 While it’s certainly never a bad time for a new romcom, there is, perhaps, no better time for one than now – you know, “now” being in the midst of a global pandemic. Enter Netflix’s Love Wedding Repeat, a high-concept romp of an addition to the genre with a stunning Italian backdrop to boot. “You just try to make a movie that will make people laugh, and hopefully [this movie] does that,” says Olivia Munn, who stars in the flick. “Thankfully, there’s a lot of streaming [available to] us right now. Like, my mom is at home watching every Korean movie under the sun. I’m so happy there’s all this content to take our minds off of [things].”

In Love Wedding Repeat, Munn stars as Dina, a journalist who forms a connection with Jack (The Hunger Games’ Sam Claflin), a friend’s brother, during a weekend getaway. Flash forward a few years, and the two are reunited at Jack’s sister’s Italian wedding – with a twist. The movie plays out alternate versions of the day depending on the various seating arrangements at the table as Dina and Jack try to get their happy ending. We hopped on the phone with Munn to talk about the movie and how she’s passing the time while self-isolating.

“I just loved the script so much and I liked the idea of doing a big ensemble comedy that was also filming in Italy. You have to find something that you can connect to within every character that you play. I love that Dina picks up and heads off to this wedding when she was supposed to be somewhere else because her whole [suddenly] life changes. I really connect with that feeling of going where the wind takes you, not letting plans hold you down. It’s all up to you.”

On being part of a hilarious ensemble cast

“There was a lot of improv and a lot of scenes where our director just let us go. In every scene, I’m opposite of someone who’s really funny and I just have to try my best not to break out into laughter. It was nice to riff and play around.”

“I can’t take credit for that comparison – someone else brilliantly said that – but I definitely concur. He’s got this really great likability and is charming and brilliant to play off of.”

On her campaign to help people foster dogs during the pandemic

“I’m an investor of this company called Wag and we’ve partnered with GreaterGood to get people to stay home and foster a dog or a cat right now. It’s so important because our shelters are being forced to shut their doors across the country, so a lot of animals are at risk of being euthanized. So if anyone has it in their heart to foster a dog or cat, there isn’t a better time to do that. People can sign up and they’ll be connected to a shelter near you and them and can see which animals are there and might be a good [match] for your family. Then Wag will help facilitate a [safe] delivery.”

On how she’s been passing the time while self-isolating

“I’ve been organizing my house. Before the quarantine, I had purchased stuff from container stores that was just sitting in my garage, so I decided to organize my closet, my medicine cabinet, every nook and cranny. It’s something I’ve wanted to do for a long time and it’s also something that I feel really productive [doing] that is actually going to benefit me for a long time after this. It’s been such a relief.”