The Romcom Is Back and Better Than Ever

Why underestimating the beloved genre is a big mistake—huge! 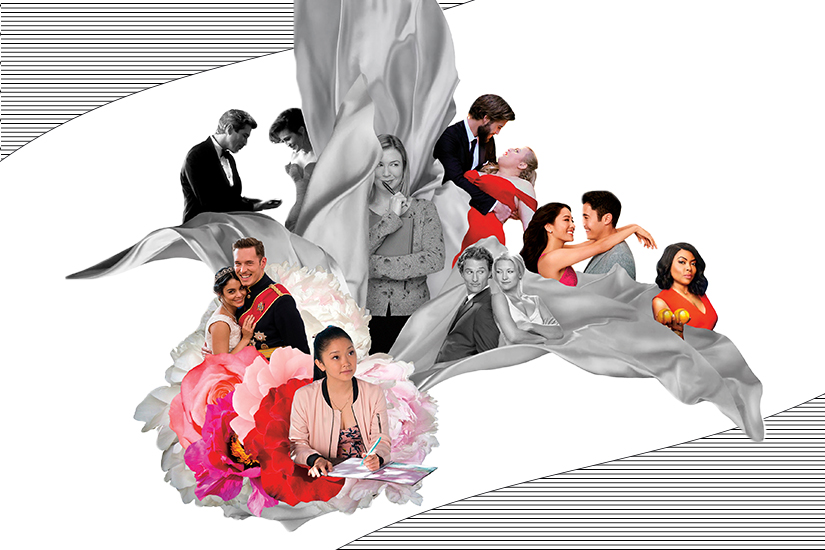 I have been fantasizing about my soulmate for as long as I can remember. He has taken many forms in my imagination over the years, from a sworn enemy who’s suddenly drawn to me to someone I met over a dec­ade ago who has been trying to track me down ever since. (I’m British in the latter version, btw.) And, sure, he’s totally unreal, but he must also sound pretty familiar, right? Because, like me, you were probably raised on a steady diet of Meg Ryan-and-Tom Hanks meet-cutes and JLo as a relationship underdog (as if) and the prospect of impossible yet impossibly charming cinematic love.

Romantic comedies have been a Hollywood mainstay since the early days, and, put quite simply, they are the best, even when, sometimes, they are totally the worst for setting up unrealistic expectations about relationships, reinforcing age-old gender roles…the list goes on. They are mindlessly predictable yet endlessly soothing—like the comfort that washes over you with your first bite of Grandma’s cookies.

Despite all that love, though, this genre has never got its due. (The last time a romantic comedy won a Best Picture Oscar was Woody Allen’s Annie Hall in 1978. Nuff said.) Since then, the romcom has been relegated to “chick flick” territory, a place most men never deign to enter or take seriously despite ticket sales. What’s more, after a romcom-filled ’90s and early aughts, the genre seemed to fade into the background of a Marvel- and think-piece-dominated decade. But all that shifted last year. Crazy Rich Asians was a critical and box-office success, heralded for its knockout perform­ances by the first all-Asian cast in over two decades, not to mention its more modern approach to romance. Meanwhile, Netflix single-handedly established the resurgence of the teen romcom (To All the Boys I’ve Loved Before, Sierra Burgess Is a Loser) and the so-bad-it’s-good Christmas romcom (The Princess Switch, A Christmas Prince). To top it all off, Ariana Grande’s “Thank U, Next” video paid homage to early-aughts classics like Legally Blonde and 13 Going On 30.

So, why the sudden flurry of the warm fuzzies? “When the economic and political worlds become dire, we look to escapist fantasies,” says Francey Russell, a philosophy professor and film critic. You’d have to look no further than your Twitter feed to confirm Russell’s theory—we need joy more than ever right now. We’re also feeling a bit more sentimental these days. “There seemed to be a moment of cynicism that struck 10 years ago—an excessive self-consciousness, both about gender roles and about love,” she adds.

Limited plot lines have also played a role in our love-hate relationship with the romcom. When the genre started taking form in the 1930s, the female leads were ballsy career women with oodles of what Eli Wallach’s character in The Holiday so aptly describes as “gumption.” But in the next dec­ade, as men returned from war, more traditional gender roles were enforced, thus producing the Doris Day era of prim heroines who were simply counting the days until they could drop every­thing for married life. And while over the years we sometimes deviated from the formula—think Julia Roberts’ anti-hero in My Best Friend’s Wedding or Angela Bassett’s divorcee in How Stella Got Her Groove Back—the romcom recipe more or less stuck: Thin, white, beauti­ful cool girl—who most likely works at a magazine—meets boy and…you know the rest.

That’s something Elizabeth Sankey, the U.K.-based director of the forthcoming documentary Romantic Comedy (which examines the impact these flicks have on our perception of love and relationships), struggled with. “When I started making my doc, I just wanted to drag romcoms,” she says. She’d recently got married, something she’d never seen represented in romcoms (beyond the big white wedding in the final scene, of course), and was feeling betrayed by her favourite films. “That sent me on a spiral of all the other things they’re terrible for, like lack of representation, that they’re predominantly made by men and that they have these very traditional values instructing women how to behave in order for men to find them attractive,” she says. But, she adds, “I carried on watching them and still loved them. I’m still moved by them. They are amazing for making people see the humanity in characters because the romcom is one of the only genres that’s simply about relationships.”

The key is to recognize the issues and for filmmakers to address them. “The format of romantic comedies­­­­ is incredibly powerful and still works—we just need to be putting different kinds of relationships in these stories,” says Sankey. This year promises to do just that, with films like Isn’t It Romantic, which stars Rebel Wilson as a cynic who, after years of being told she wasn’t worthy of romance, finds herself trapped inside a romcom, and What Men Want, starring Taraji P. Henson, which flips the gender script of the 2000 original. “The fact that there’s this [rise] in romcoms that are reinventing the genre but also being unapologetic about being romcoms suggests that there’s a new interest in earnestness and love in movies,” says Russell.

So maybe the future of romcoms lies in their duality—their strange ability to make us root for love while also broadening the scope of who that love can happen to. “The way we feel about You’ve Got Mail we could feel about a trans woman falling in love with a man—and that could be something that changes the world,” says Sankey. I know I’ll be watching.