The wildly popular teen drama has been compared to The O.C., Riverdale and The Goonies. 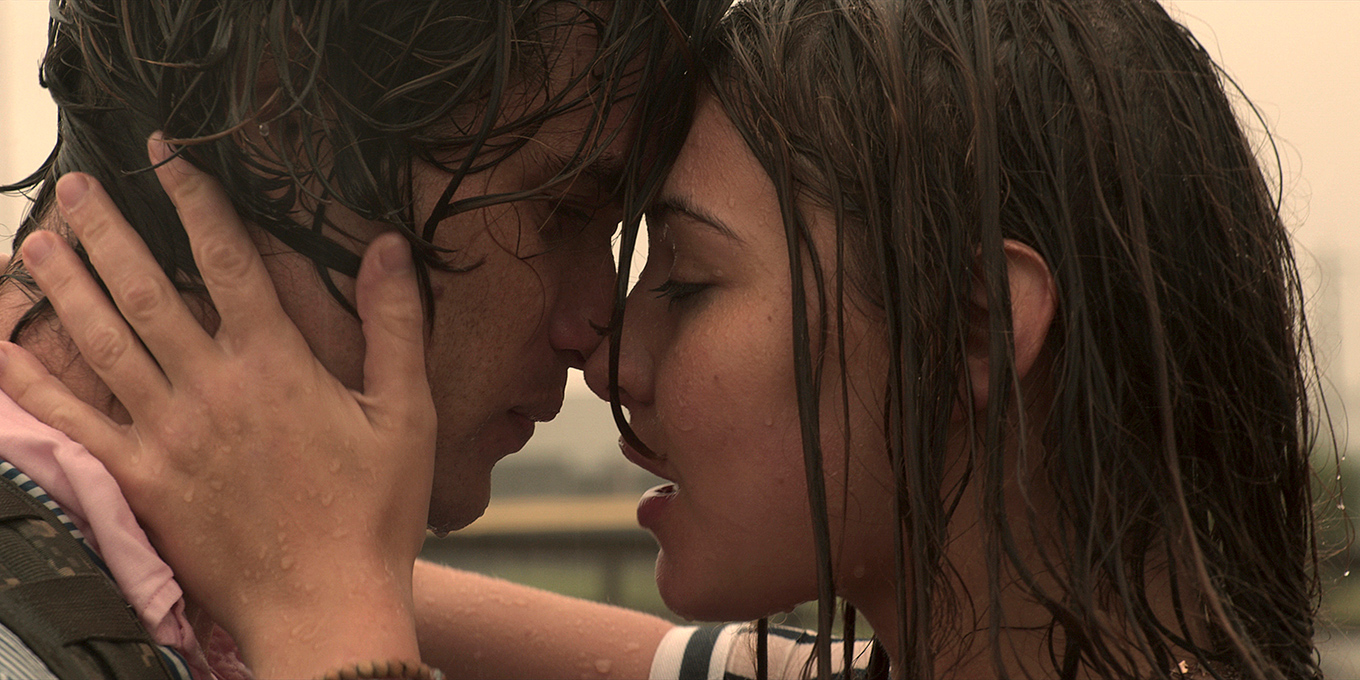 When Madelyn Cline was 19 years old, she packed up her college dorm room and left her hometown of Charleston, South Carolina to pursue an acting career in L.A.. “I just decided, ‘Why not give this a shot now? I’ve got a little bit of money saved up, this is what I want to be doing. I feel like now’s the time,’” she told us.

Clearly, her decision has paid off. You may have seen the 22-year-old in supporting roles in the 2018 film Boy Erased alongside Nicole Kidman or in season two of Stranger Things. It turns out that Cline’s latest project was also her homecoming; last summer, a few years after leaving South Carolina for California, she returned to Charleston to shoot the wildly popular new teen drama on Netflix, Outer Banks. The show has been compared to The O.C., Riverdale and The Goonies, which is to say, it’s steamy (love triangles galore!), action-packed and totally binge-worthy.

Cline plays Sarah Cameron, a “Kook” or wealthy Outer Banks teen, who becomes entangled both personally and romantically with the “Pogues” (the working class). A search for hidden treasure linked to John B. (played by Chase Stokes, who is one of Cline’s love interests) and his missing father flips the Kooks’ and Pogues’ worlds upside down. It’s a 10 episode season, but don’t be surprised if you coast through in a single weekend.

Cline chatted with us about how she learned to empathize with her character, her quarantine set-up and why she will never try a juice cleanse again.

How have you been doing? What has quarantine been like the past few weeks for you?

I’m good, hanging in there. Just staying inside and trying to stay sane [laughs]. Some of the cast [from Outer Banks] have been quarantined together for over a month now. It’s been a riot: we’ve been movie marathoning and binge-watching Jersey Shore and New Girl, we built a fort in my living room early on… we’ve been playing many games. All the games.

Were you living together before or is this just for quarantine?

This is just a quarantine thing. At the very beginning, when stay-at-home orders were first issued, we all decided ‘Why not just quarantine together?’ We have each other’s company instead of just staying home completely isolated. We gave each other the time [away] as far as the initial incubation period is concerned, so we’re all safe and healthy.

It’s been about a week since the show premiered and tons of people have already binged the whole series – it is #2 on Netflix Top 10 here in Canada. What’s the response been like for you?

It’s wild. When you have sat on a show, or something you have created for a year, and you’ve seen it so many times in sound mixes and for press, it almost doesn’t feel any different [once it’s out]. You know it’s something special when you’re shooting it and you love it so much, so it’s obviously a relief when you have it out in the world. It’s crazy and overwhelming in the best way possible to see people react positively to it. I don’t think any of us really expected the response to be so overwhelmingly positive. We all just feel massively grateful that people love it just much as we do.

Over the duration of the series we get to know different sides of your character, Sarah. What drew you to Sarah and how do you relate to her?

Early on, I was pretty intimidated by the workload. This is definitely the biggest thing I’ve ever done. Obviously, with any role, you want to do it justice, but this was my first really big chance to sink my teeth into a character and build a character arc. What really drew me into her was tapping into insecurities and empathizing with her as a person. It was about going back to that 16-year-old self that I recognized in her. That blossomed, and I found a lot of myself in her and I was able to bring that to screen and find my truth in that. To put that much of myself into a character and into a project that meant so much to me was a dream.

There are so many twists and turns throughout the show – what was your initial reaction to reading the script? Did you receive the entire season’s scripts all at once?

When we got to Charleston for the first table read, we only had up to episode four. We really didn’t know what the latter portion of the season was going to be. As the season went on and we got further and further along, we would randomly get sent drafts of the next episode. During lunch or during any break we had, we would all sit down and read it together. You would hear someone scream from their trailer or we’d be live texting each other like, ‘No spoilers!’ As you’ve seen, the show gets wild, so we were experiencing that for the first time as the show went along. It was just as much of a wild ride for us as it is for viewers.

What was it like coming back to Charleston after moving to L.A. and filming the show in your hometown?

As far as preparing for a role I always try to gain familiarity with the circumstances and my surroundings, so that was kind of built in already. I felt so at home and regained a love for Charleston in the process, too. I kind of ran for the hills when I left [for L.A.] and then got back during an idyllic summer on this dream project with the best cast and crew… I fell back in love with it.

I also read that you were supposed to film in North Carolina, where the actual Outer Banks are, but because of discriminatory laws there was a location switch. Can you tell me a bit about that?

Our creators, Jonas [Pate] and Josh [Pate], really fought for the show to be shot in the Outer Banks or at least North Carolina – primarily in Wilmington, for authenticity. North Carolina’s House Bill 2 represents transphobia and discriminates against those in the LGBTQ community, which is something that Netflix and our entire cast and crew do not endorse whatsoever. They did have a “repeal” but the repeal still allows for the discrimination of the LGBTQ community. With all of that combined, Netflix made the decision, which I completely agree with and so does our entire cast and crew, to move shooting to Charleston. Honestly, it was such a dream. Charleston was so great to us.

The chemistry on screen between the cast is palpable. Did you quickly become friends?

I actually knew Deion Smith, who plays Kelce, one of the Kooks. He’s one of my childhood friends. I showed up to set one day and I saw Deion there and we both freaked out, because at that point I hadn’t really told too many people [about the show].  I also knew Nick Cirillo, who plays Barry, from a previous project, an indie called The Giant. It was really cool to see familiar faces, but for the most part we didn’t know each other. It was this really wonderful circumstance where everybody just ended up getting along really well. We became like a family.

Do you have any specific bonding moments that stick out?

The first couple weeks we were there, Jonas Pate, our show runner/creator and director, wanted us to spend the night at the Chateau [character John B.’s home] for character development. At that point the Chateau was completely dressed. John B.’s office was completely set up – the kitchen, the living room, the bedrooms – everything was completely dressed. Walking in there, it hit me like a ton of bricks. I was like, ‘Oh my god, this is happening. This is so real.’ We spent the night at the Chateau, we played games like Uno and Ring of Fire and we watched the sunset on the dock. It was so magical, because we all felt the chemistry. It was perfect.

I also saw on your Instagram that you did a juice cleanse while filming, but it looks like it didn’t go so well… please tell us about your juice cleanse journey.

Oh god [laughs]. It was a journey, for sure. Jonas came to me before we started shooting and was like, ‘I really want you guys to be ripped and tanned [for the show]’ and I was like ‘Copy that, captain. I’m going to start getting into shape and eating healthier.’ If I was going to be on screen in a bathing suit, I wanted to feel good about myself. I was like, ‘You know what, I’m going to try a juice cleanse.’ I’d never done it before but I thought it was a good idea. I was miserable. I wanted food, I was cranky and the bottom line is I don’t think I will ever do that again. I also went a bit overboard and decided to do a five-day juice cleanse. I made it a grand total of three days.

I was very proud of making it that far but I immediately went and ate McDonald’s afterwards. I left my apartment, drove to McDonald’s and was like, ‘Give me one of everything.’

The series has an insane cliffhanger ending. With quarantine still happening, we know not much can happen right now but we have to ask: are there any sort of plans for a second season?

Nothing is confirmed yet. We’re all just kind of seeing how it plays out. We’re just riding out the fact that people are really loving the show right now. Based off the response, though, we are all really hopeful… we would love nothing more than to go back and do it again.

Season 1 of Outer Banks is streaming now on Netflix.