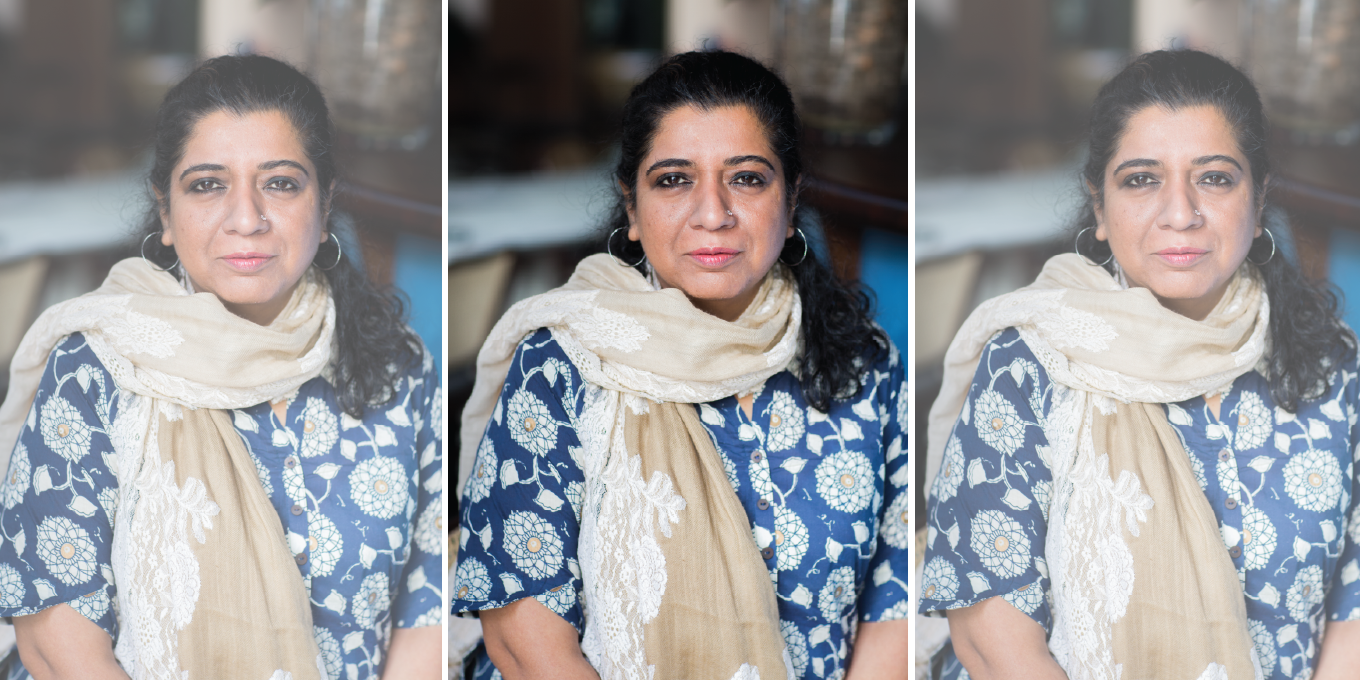 Asma Khan is many things—she’s a chef (with a PhD in law), a cookbook author, an activist, the star of her own YesChef online cooking class and the owner of London’s highly acclaimed restaurant Darjeeling Express. While the COVID-19 pandemic may have sparked a long-overdue racial reckoning, Khan has been having these exact conversations for years—and continues to be one of the loudest voices pushing for inclusivity and social change. “For me, food is always about power. It is about politics,” says the Kolkata-born chef over Zoom. So, it’s not uncommon for Khan to use her platforms to talk about global hunger, her commitment to training immigrant women, gender equality and calling out toxic work cultures lurking inside kitchens.

“The whole justification of violence, bullying and aggression, saying this is under pressure is crazy,” she shares about the male-dominated restaurant industry riddled with regular abuse. “If they were outside the kitchen—I can tell you this as a lawyer—they will be in bloody prison.” And yet, still to this day, patrons line up outside those restaurants, keeping the cycles of oppression in a historically broken system very much alive. But Khan is flipping the script with her award-winning, all-female kitchen team of talented home cooks. “[These women] have life experience—they cooked for [their] families and have cooked with [previously] no celebration and no money,” she says, and they’re more than qualified.

Now, with the release of Ammu: Indian Home-Cooking to Nourish Your Soul—Khan’s second book—she continues to change the narrative of how women are perceived at home and in restaurant kitchens with a heartwarming tribute to her Ammu (or mother). Inspired by the bustling bazaars, fish markets, narrow alleyways, memory-triggering dishes, and the stories of her childhood in West Bengal (India), Ammu is packed with 100 mouth-watering, make-forever recipes that have lovingly been passed from mother to daughter.

A few days before Darjeeling Express temporarily closed its doors in Covent Garden, we spoke to Khan about the cuisines of Kolkata, her new cookbook, the political power of food and more.

You’re proudly from Kolkata in West Bengal, what does the city mean to you?

Kolkata, for me, is an emotion: it’s about feelings and belonging. Every time I walk—even though it is a street that’s unfamiliar—I feel even the dust that flies recognizes me; that every bird knows my name. It’s that feeling of homecoming which is very hard to describe. I have lived 30 years abroad [in England]. I lived most of my life—when I lived in India—in Kolkata. But it wasn’t the years, I felt so accepted.

India today is not the India in which I grew up. Kolkata is still an incredibly generous, loving, open-hearted place, but change is happening everywhere. When I grew up in Kolkata, [I was] a girl of the city, and they embraced you for that. That is something that I really value now—no one is trying to put you in a box. None of those parameters of power and status matters in this city. One of the great levellers was always street food: it didn’t matter whether you got off a Mercedes or a rickshaw, you paid the same price, you were treated exactly the same, and you loved that experience in the same way.

How would you describe Bengali cuisine compared to Punjabi food, which is somewhat better known?

For one thing, we [don’t] have cows. This is a delta. Bengali food is very delicate and fresh, but there are [different] elements: the Bengali food of Hindu Bengalis and [that of] of Bengali Muslims; then there’s Anglo-Indian and Indo-Chinese as well. So, you get these different levels of food, and all of them sit next to each other—they’re at peace with each other. Each thing is different yet linked to Kolkata. And this is why I love Kolkata—it allows everyone to be who they are. There are no big debates that this food is superior to that—everyone just wants to eat everything. I think that’s what makes the food of Bengal very, very unique.

Ammu is your second book, but it’s not just a cookbook. What inspired you to write it?

I always had this cookbook in me. I would have written it at some point, [but] when the pandemic hit and [Indian] borders closed, I knew I couldn’t go see Ammu for a while. The second wave in India was horrendous—I got really scared. In Ammu’s lifetime, I was going to write this book. I needed her to know I captured the soul of who she was, of all these recipes, and the special relationship [between] food and mothers and daughters. And so, Ammu [is] a tribute to these powerful women: the sharp things in our lives and the anchors that kept us going in difficult and stormy times. There [are] births, deaths [and] marriages in our culture; food is a very important element of that. That’s what this book really reflects.

What are some of the dishes from Ammu that you hope readers will try?

Because I’ve worked so hard on getting the recipe right and I [know] people have recreated it, it would be the chicken biryani. The seekh kebab allows you to try the flavours of our food in an almost clean, naked way—there’s no gravy there, [and] the spicing is subtle. So much of our food is bastardized into [something that is] super spicy, oily, with cream and butter. If I put [that] much cream and butter in my shoe, it’ll taste nice! Our food is actually light and refreshing, but most people don’t associate those words with Indian food. So, I think any of the kababs and definitely the seafood—fish dopiyaza, prawn malai—they’re good dishes to cook. 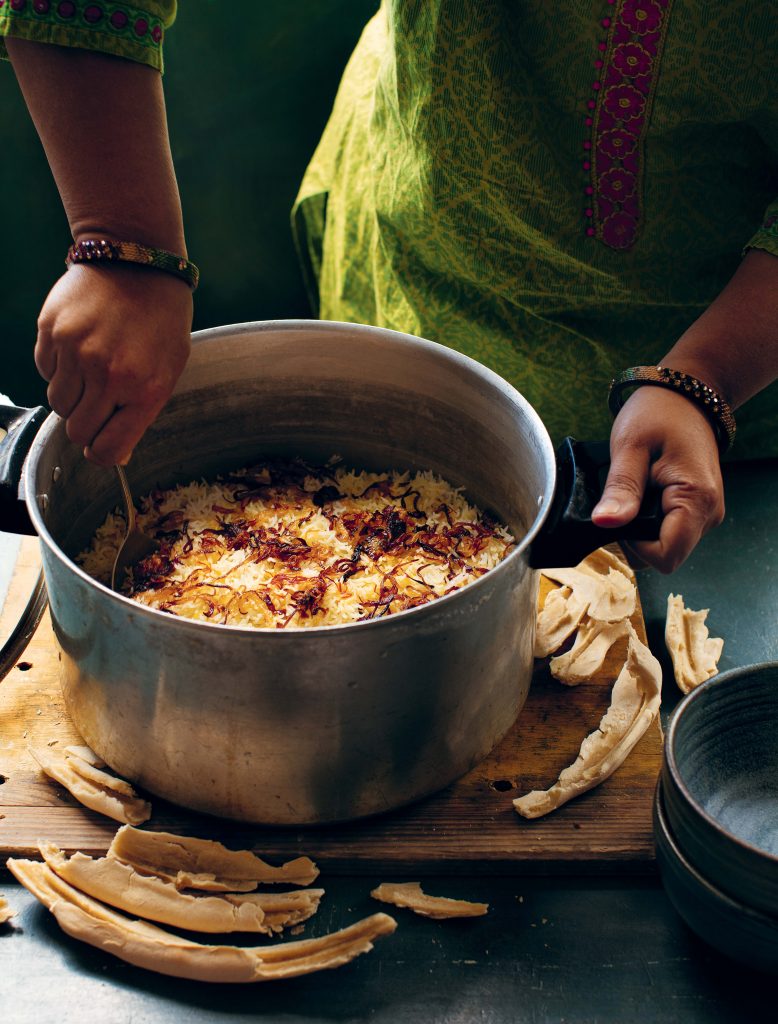 Why was it so important for you to have an all-female kitchen team?

I needed women in my kitchen who cooked like me—instinctively, intuitively—without weights and measures, gizmos and sous vide. This is how our cuisine has passed from generation to generation: it is about someone watching, tasting, then recreating it. Women are the custodian of recipes. Almost all the [South Asian] men who are cooking today—at the middle-upper level—went to culinary school [usually under the Taj or Oberoi 5-star hotels]. They didn’t learn at home with their mums. The food you cook is an extension of who you are; it doesn’t need to be standardized. But in a 5-star hotel, food should taste the same every day. I think that there’s something very powerful about seeing a kitchen of nine women cooking [without] conflict. This is the story we need to tell.

You were the first UK chef on the Emmy-nominated Netflix series, Chef’s Table, which aired in 2019. How was that experience?

When I told the producers I wanted to show my entire team, it was interesting. [Up until volume six], they’ve had 35 chefs and not [even] one showed their teams. I said, not only am I going to show my team, [but I also] want them named; I want their village to know, ‘that’s my girl.’ A lot of the show is about them—not me. But this was the right thing—they’re the ones cooking. It was a great opportunity. I took [viewers] on a journey. [The Chef’s Table team] were fantastic, and it was great fun as well.

Is it changing? And what do you hope for other women in the food industry?

There’s definitely a change. Our time has come. I am the only female-founded, all-female kitchen cooking Indian food at this level [worldwide]. I’m absolutely sure in my lifetime, I will see women surpassing [me]. That will be my greatest victory. I feel the breath of the next generation of leaders in the culinary world behind me: every hurdle I fell on, that I carry the scars [of], I removed it for her. She will find the path easier. [That] is what Chef’s Table has done. It allowed me to talk about justice. It allowed me to present the stories of women—accented, immigrant women—the uncelebrated; the ones without names; the women who went to the graves thinking they had no skills, even though they were great cooks. I didn’t take the opportunity of Chef’s Table to talk about my torment and my great dish. 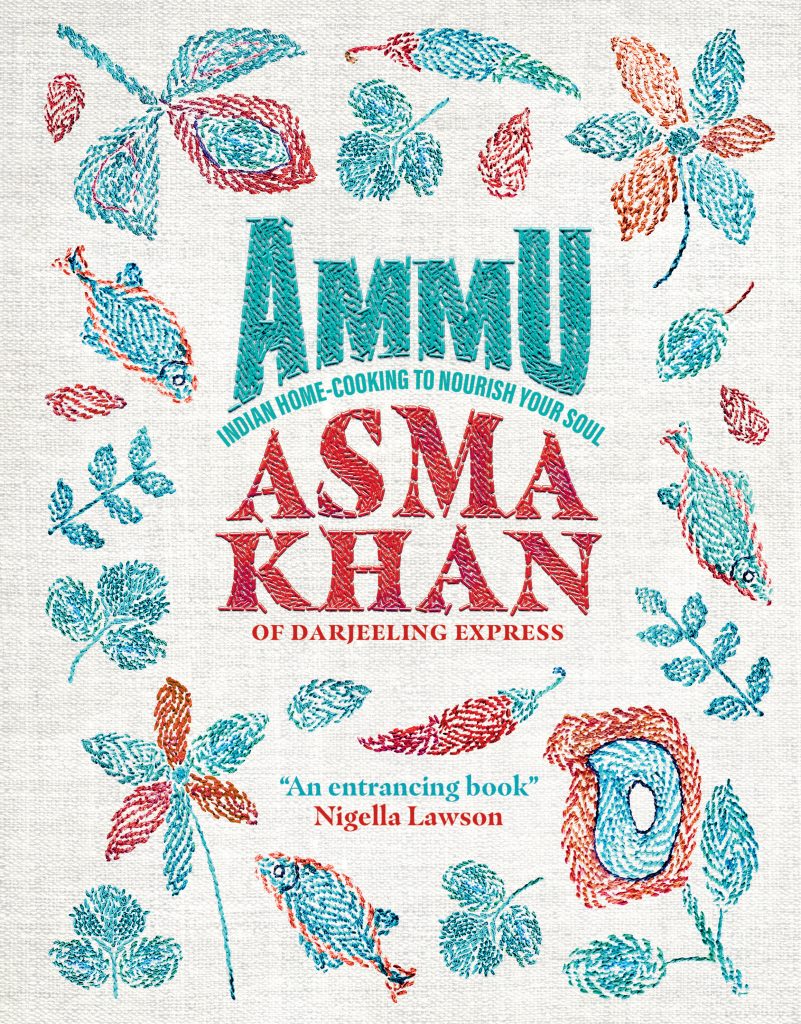