If you asked someone what would be on their list of things to do if they ever moved to France, you’d probably hear a few different answers. Visit the Eiffel Tower, the Palace of Versailles and the Louvre, maybe. But close to the top? Eat as much cheese and as many croissants as humanly possible. Canadian food blogger and recipe developer Hannah Sunderani, who lived in the historical northern city of Lille for four years when her husband got a new job in the region, is not like most people. “I did the opposite,” she says with a laugh. “But I love to make things difficult.”

Prior to making the move in 2016, Sunderani had always toyed with the idea of going entirely vegan but she didn’t want to be “that person”—the one who went over to friends’ and family’s places for dinner and was the lone person who required a different meal. But in France, she’d be doing all the cooking, and she needed something to keep her busy when not out exploring. And so it was decided: she’d follow a plant-based diet and document her journey and the recipes she created on her blog, Two Spoons.

A lot has changed for Sunderani since then. Her site took off, and she’s been able to turn her passion for and curiosity around food into a full-time dream career. She and her husband moved back to Toronto in early 2020. She’s become a mom to a baby boy named Oliver. And now she’s set to welcome what she calls her second baby: The Two Spoons Cookbook, which hits shelves on May 31. In it, Sunderani shares 100-plus French-inspired vegan recipes, from a vibrant ratatouille to irresistibly flaky croissants (yes, really).

We caught up with Sunderani to chat about her debut cookbook, the challenges of being newly plant-based in France and her tips for bringing French-style cooking into your own kitchen.

Two Spoons came out of your move to France and your decision to commit to a vegan diet while there.  Did you start it as a way to stay in touch with friends and family back home, or did you think it was something you could turn into a career?

In the beginning, it was a place to share and document my life while I was away. Deep down, I always wanted it to be a career. It’s such a dream come true. I wasn’t thinking about a cookbook back then, but I think in the back of my mind, and looking at some of my idols who have their own beautiful blogs and books, I was hoping to turn it into a success. It definitely started as a passion project though. But I just take things quite seriously, so I poured my heart and soul—and many, many hours—into it, and I really believe that what you put out into the world is what you get back. So I invested the time in trying to make my blog as delicious and easy and straightforward to follow as possible, and, fortunately, it took off.

How did it turn into a cookbook?

This is the crazy part. When my husband and I decided we wanted to move back from France, I created this vision board of where I wanted to see Two Spoons going, and one of the things I had on the board was a cookbook. It was sort of like a five-year plan: We’ll move home, hopefully my blog will continue growing, we’ll start a family, then maybe a book will come. And then six months after we moved home, I got the cookbook offer, which literally blew my mind. I couldn’t believe it hald all come together so quickly. It’s funny how things happen in life, because I had the plan. We were trying to have a baby and it was, like, impossible for us. We could not get pregnant. Then this book came and it was the perfect time. I was struggling with infertility and IVF, but then I had this thing that brought me so much joy during a time that was so hard and emotionally challenging. And by the time I submitted the last version of my manuscript, I was six weeks pregnant. It still gives me shivers thinking about it because it was this really full circle moment. Now I have the book in my hands and can also hold my son, and it makes me want to cry.

Was it difficult to make the change to veganism in a country known, in part, for its rich food scene?

I took it on as a challenge. I reference it a bit in my book, that there were definitely some funny situations that I got into myself as a vegan in France. In school, I stopped taking French after Grade 9, so [when we moved], my French was very rusty, and I was having to deal with deciding to go vegan, being in a different culture and not understanding the language entirely yet. I remember the first month or two, I would go to the grocery store, look at a product, and have my phone to translate everything. All the products look so different than what you’d find here in Canada too. I did [eventually] find a few shops that had quite a good vegan supply. But overall, the culture around food and the joy of cooking is the same—we all had that baseline foundational passion, so it really wasn’t too difficult.

What were some of those “funny” situations you got into?

When we’d go out to eat in a restaurant, I used to call in advance to let them know that I was vegan to give them a bit of a head’s up because I never wanted to throw a chef off guard. There was this one restaurant that had opened close to us that was this gorgeous brasserie-style place, and we really wanted to go. So we called and said, “Hey, we want to come buy. Can you offer something plant-based?” It gets all set up, we go for our dinner and, I guess the chef was not happy about having to make something vegan, because when the main course came it was literally a plate with half of a cooked carrot. That was our meal. We were like, “Oh god, we really pissed him off.” I still laugh about that.

Also in the book, you write about how the food culture started to change while you were in France—you were able to find a vegan community. What kind of changes did you see happening in Lille, where you lived?

It was so cool to see. I feel like this was happening on a global level already. When we decided to move to France, veganism was becoming more popular, but it was a bit slow growing. When I first arrived, it was hard to find plant-based ingredients, like coconut yogurt, for example. You [could find them], but you had to do a bit of hunting. But, over time, we’d see vegan restaurants popping up and obviously we’d go, and because it was such a small community, we’d all get really close really fast. We’d DM each other about resources and petits magasins we’d discover that were entirely vegan. Before we left, there was even a vegan restaurant that was, like, a three-minute walk from where we lived, and we’d go every Friday.

What tips do you have for Canadians about how they can bring French culinary influences while staying plant-based into their own kitchens?

There are a few substitutes that are always really helpful. You really need a good vegan butter on hand. My recipe for croissants in the book took, like, eight or nine trials and I mention that there are certain types of vegan butters that work really well. Miyoko’s vegan butter works really well for the croissants, but if you’re doing something like a pastry crust, I find a softer alternative, like Earth Balance, works better because it’s a bit more flexible. There’s also a whole section on cheese in the cookbook. For that, you’re really going to want to make use of raw cashews, where are a good base, and then you add things like nutritional yeast to enhance that cheesy flavour. You can also use it in things like crème brûlée to really elevate it and take it to another level.

One of the things I often use that isn’t a traditional French ingredient is miso—miso paste adds a really nice umami flavour to ingredients. I use it in my baked brie because it adds this deep, rich flavour.

What are some of your favourite recipes in the book?

My vegan croissant is definitely one. It’s one of the more involved recipes, but it’s well worth the effort.

Croissants seem like one of the more difficult things to perfect a vegan version of.

I have served mine to so many of my non-vegan friends and they love them. I also have a recipe for a brioche that I love—it’s really pillowy and pulls apart like clouds. It’s so good and lightly sweet. The chocolate macarons are really good, and I love a lot of the simple dishes too, like my green beans almondine, which I call “accidentally vegan” because it has a lot of ingredients that just happen to be vegan. It’s one of those dishes where, if you serve it, you’re not even thinking about if it’s vegan. I’ve been blogging for maybe five or six years now and, I have to say, this cookbook is the best work I’ve done. I’m so proud of every single recipe. I really hope that people enjoy cooking from it because my heart is in it. 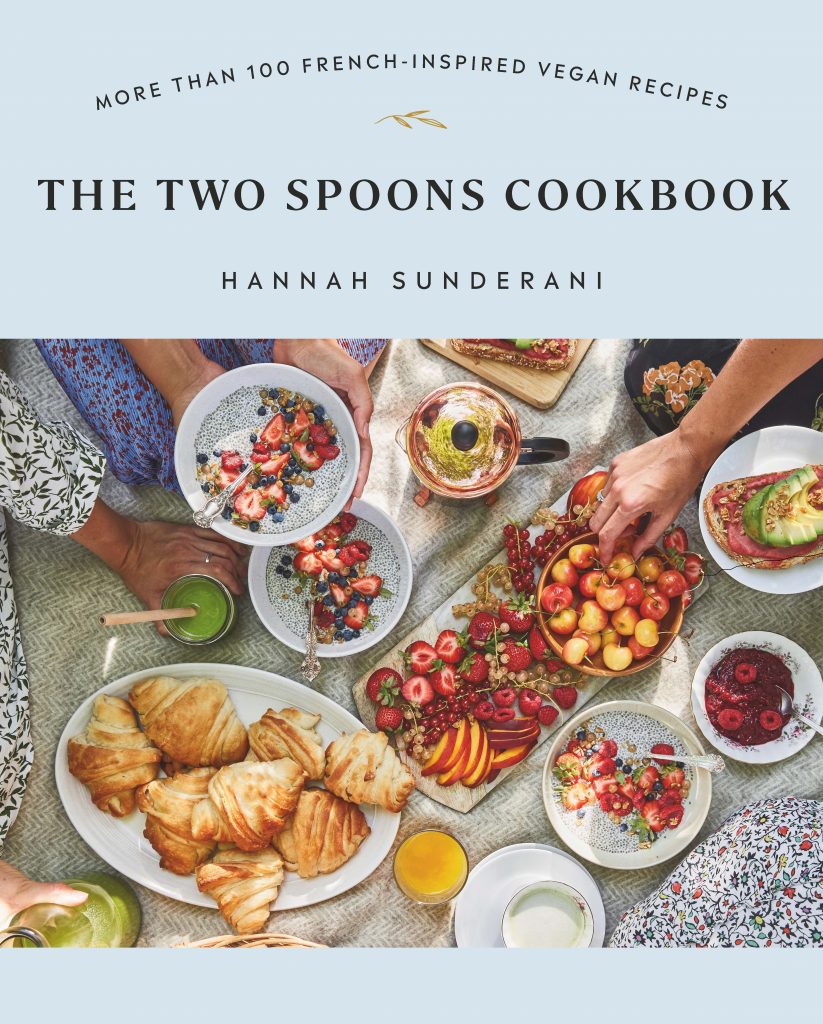 Order your copy of The Two Spoons Cookbook: More Than 100 French-Inspired Recipes here.