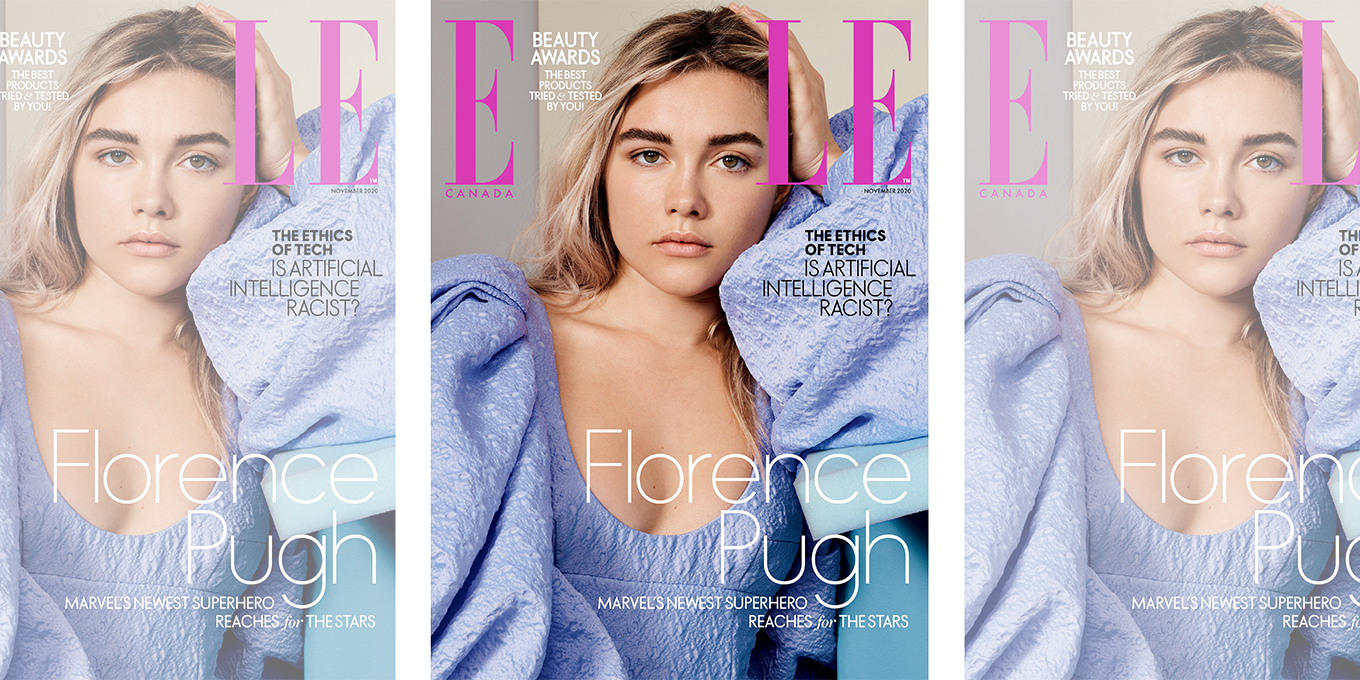 At just 24, actor Florence Pugh has an impressive resumé that’s stacked with versatile and compelling film choices. Her next role as a superhero certifies her as a bona fide Hollywood star.

Florence Pugh is having a moment of intense pleasure. Slowly, elegantly, with the tantalizing precision of Nigella Lawson, she slices into a glistening ball of burrata. “Oh, my God! Did you see that?” It sits in front of her, drizzled in pesto, its contents oozing onto the plate. “It was quite sexual, wasn’t it?” she says. There’s a pause. “Don’t tell everyone I said popping cheese was quite sexual.”

But eating lunch with Florence Pugh is a sensual experience. Maybe it has something to do with our afternoon being filled with eyebrow-raising innuendo (hers, not mine) or the fact that Pugh’s laugh—a full-bellied growl (she calls it her “dinosaur laugh” bounces across the restaurant every few minutes. Or perhaps it’s just that Pugh is one of the great sensual artists—someone who is unfettered by PR fluff and possesses a prodigious appetite, bountiful opinions and a rare openness that makes everyone who meets her want to luxuriate in her company.

We meet at Luca, an Italian restaurant in the Clerkenwell neighbourhood of London, England. (This was only a few weeks before we were forced into COVID-19 lockdown.) Pugh is at that delicious stage in her career when she’s still game to offer a journalist more than an hour’s “chat” on her cover shoot, so we’ve decided to meet for lunch. Her father was a restaurateur and she has a successful sideline testing recipes on her Instagram stories, so she’s very much at home rolling up her sleeves in the confines of a stranger’s kitchen. Pugh comes from a bustling family—half food-lovers, half thespians. (Her brother and sister are also actors.) “I grew up in a very big family where eating, performing and chatting were an every-Sunday thing,” she says as we sit down to enjoy our pasta. “We’d have big lunches with all sorts of people from around the world—musicians, artists, writers—and it was expected that we [kids] would speak and host.”

Earlier this year, Pugh was nominated for a Best Supporting Actress Oscar for her role as Amy March alongside Saoirse Ronan and Emma Watson in Little Women. Greta Gerwig, the film’s director, tells me that Pugh brought her familiar and playful energy to set every day. “She instinctively knows how to be in a big family group,” she says. “She was always the first one in the play fight, the first one telling a joke, starting a giggle-fest, eating the prop cakes. She had that bubbling-over energy of sisterhood.” 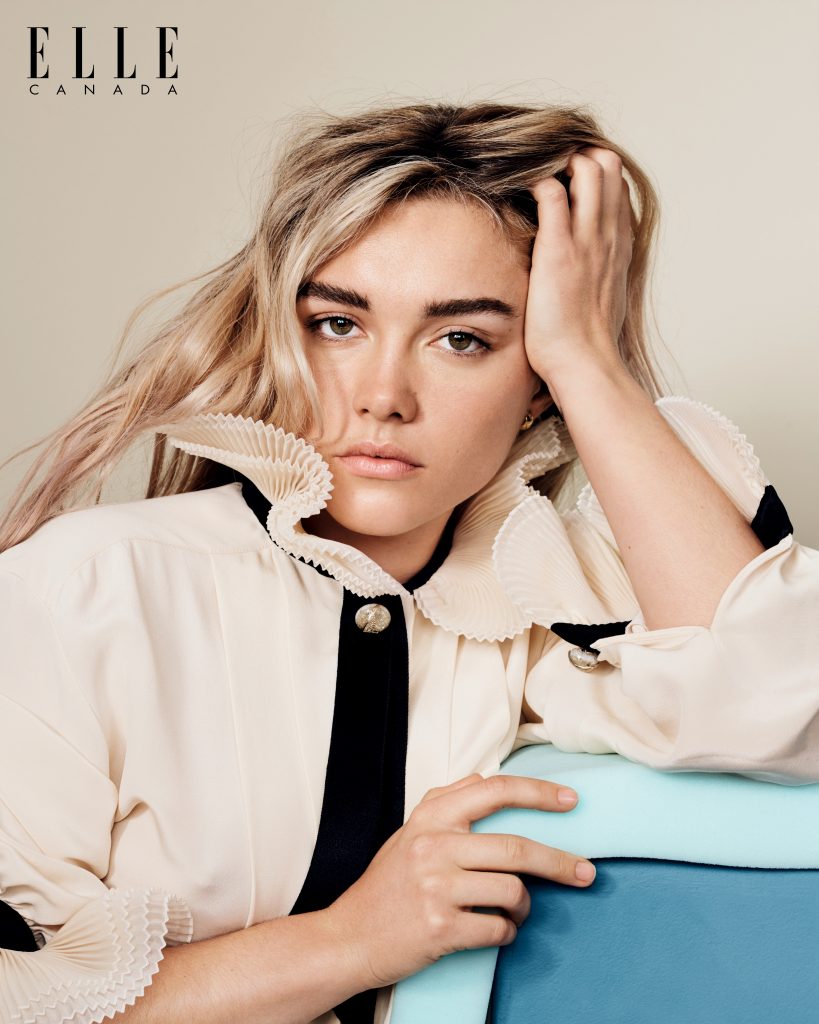 That sisterly closeness is something Scarlett Johansson, Pugh’s co-star in Marvel’s upcoming Black Widow, also felt. “I don’t have a little sister,” she tells me over the phone from New York. “But with Florence, it feels to me like there are some elements of big sister, little sister.” With the latest Marvel film, Pugh is making her own mark. Her new-found stellar status was confirmed in just 30 seconds with a trailer shown during the Super Bowl, watched by more than 100 million people. In it, Pugh was given equal airtime to co-star and fellow Oscar nominee Johansson.

In the midst of Pugh’s success, it’s easy to forget that she is still in her early 20s. “I wish I’d been as confident as she is when I was her age,” says Johansson. “She’s body-confident and has a lot of self-respect. I was reminded—just by listening to her talk about relationships with friends, family or her partner—of how important it is to have confidence in your beliefs and desires.” Pugh’s partner is fellow actor Zach Braff, who also happens to be 21 years older than her. A lot has been made of the age gap (much of it pillorying), but when you spend time with Pugh, you wonder how a 24-year-old man could make the cut.

Her decision to accept the role of Yelena Belova in Black Widow—a Russian spy who, like Johansson’s character, Natasha Romanoff, has been trained in the Black Widow program—wasn’t an easy one to make. “When you think of Marvel, it’s big and daunting,” she says. “Especially [for] a relatively small actor [like me], to look at it and go, ‘Oh! I’m going to be a part of this’—that’s a big decision.” But nothing could have prepared Pugh, who admits she wasn’t a Marvel fanatic growing up, for the huge global response. Last summer, the cast was revealed at San Diego’s Comic-Con, the annual superfan conference. “It was like a warehouse full of people,” she says. “We went out, and I’d never heard a roar like that.”

Pugh’s Black Widow character is described as being “in peak athletic condition.” When I put this to Pugh, she lets out a raucous laugh that appears to come not from her belly but from her feet. “Essentially, you need to look good moving,” she says. “For me, I loved all of that because I grew up with a lot of dance and a lot of movement. I was always fighting my brother [actor and musician Toby Sebastian], so I find all of that combat stuff so exciting. Once you put it on camera, you’ve got to know how to make it look right, and that’s a whole different beast.” 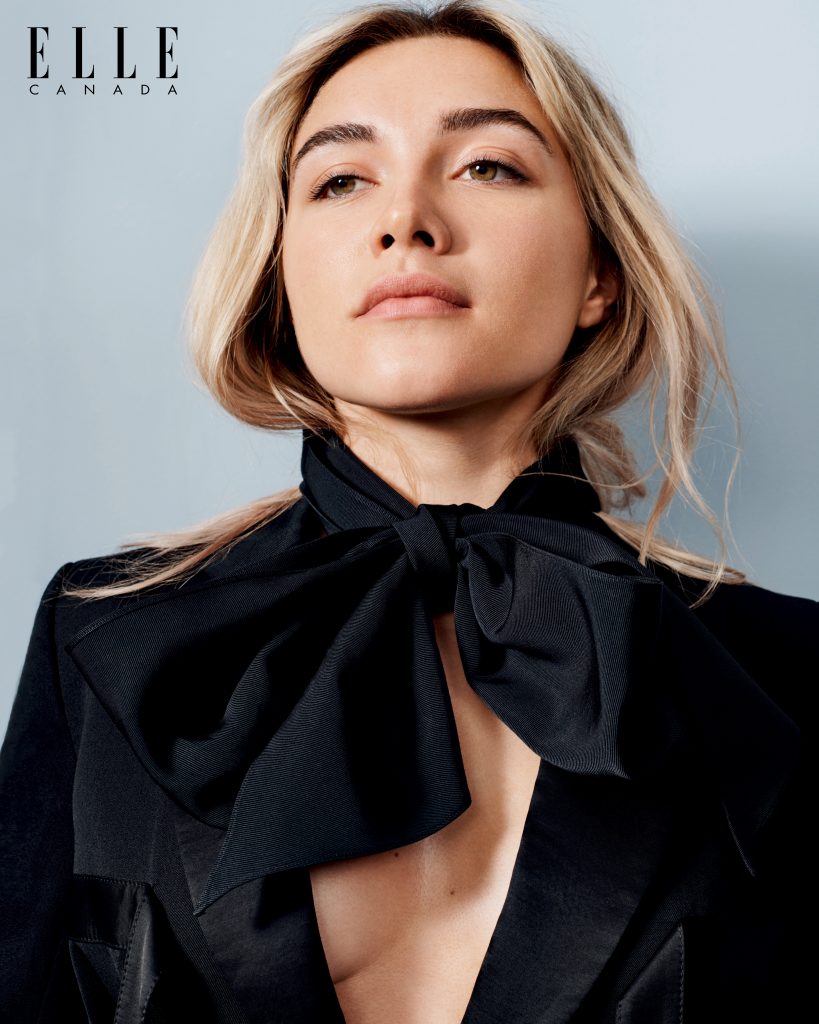 There have long been rumours that stars of Marvel films have to submit to gruelling workouts and exacting diets, which is interesting given that Pugh has previously spoken out about bad body-confidence experiences she had in Hollywood when she was a teenager. “When I got the job, I wanted to know what the regimen was,” she says, tucking into a forkful of salt cod. “I wanted to know whether it would be them or me calling the shots. That was a big deal for me. I didn’t want to be part of something where I was constantly checked on and people were making sure I was in the ‘right’ shape. That’s not me at all.”

Still, she says she ate well, cooking in the morning and taking a Tupperware of homemade food to work each day. “Scarlett had this amazing guy who cooked beautiful things for her and her team,” she says. “I thought that was clever because you’re doing fitness all the time and you need to have someone who’s on top of what you’re eating and the nutrients you’re getting. I remember her asking: ‘Why are you cooking for yourself? Just let us feed you!’ And I was like, ‘Nope.’ My brain is so ‘pew, pew, pew,’” she says, shooting imaginary lasers with her fingers. “Genuinely, my therapeutic thing is chopping and cooking and stirring and tasting.”

One of the things Pugh’s fans love her for is her frank approach to life as an actor, especially on social media. She recently did a series of Instagram stories berating her iPhone for automatically changing a filter on a selfie she’d posted. “It should be your decision,” she says, still visibly riled by the experience. “I’m not saying I want to wave around my flaws, but the point is that I should [be able to decide whether] to eliminate them [or not]; my phone [shouldn’t be] programmed to take away the things that make me me.” 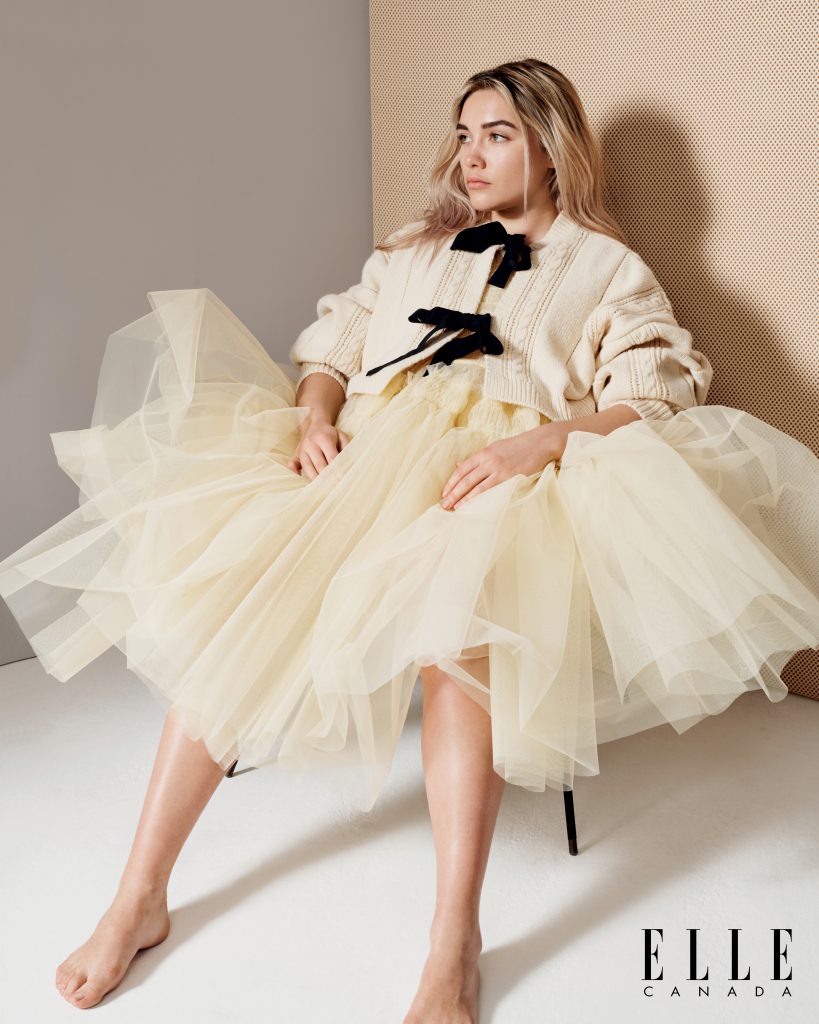 Pugh admits that she approaches online life with a touch of amusement. “When I’m making marmalade, I don’t have pretty hair,” she says. “There are moments in my life when I get dolled up and two amazing artists will come to my house and paint, pull and brush me for two hours. Then I go to the red carpet. That’s a two-hour event, and then I go home and take it off. But when I make marmalade, I look normal.”

We’re on our third bowl of pasta, and our interview time is up. There’s a driver waiting to take Pugh to Oxfordshire. She politely asks for the leftovers to be boxed up. “My mum would love a doggy bag,” she says, obviously looking forward to some home comforts. We walk through the restaurant, and I ask whether she gets recognized. She says that unless she’s with someone (like Johansson) and people put two and two together, no one really stops her—she gets away with being “a regular blonde.”

She wheels her suitcase to the car while juggling several bags. “At the Oscars one week and look at me now!” she exclaims as we hug goodbye. But as she’s driven away with leftovers on her lap, I’m not sure how long her life as a regular blonde will last. 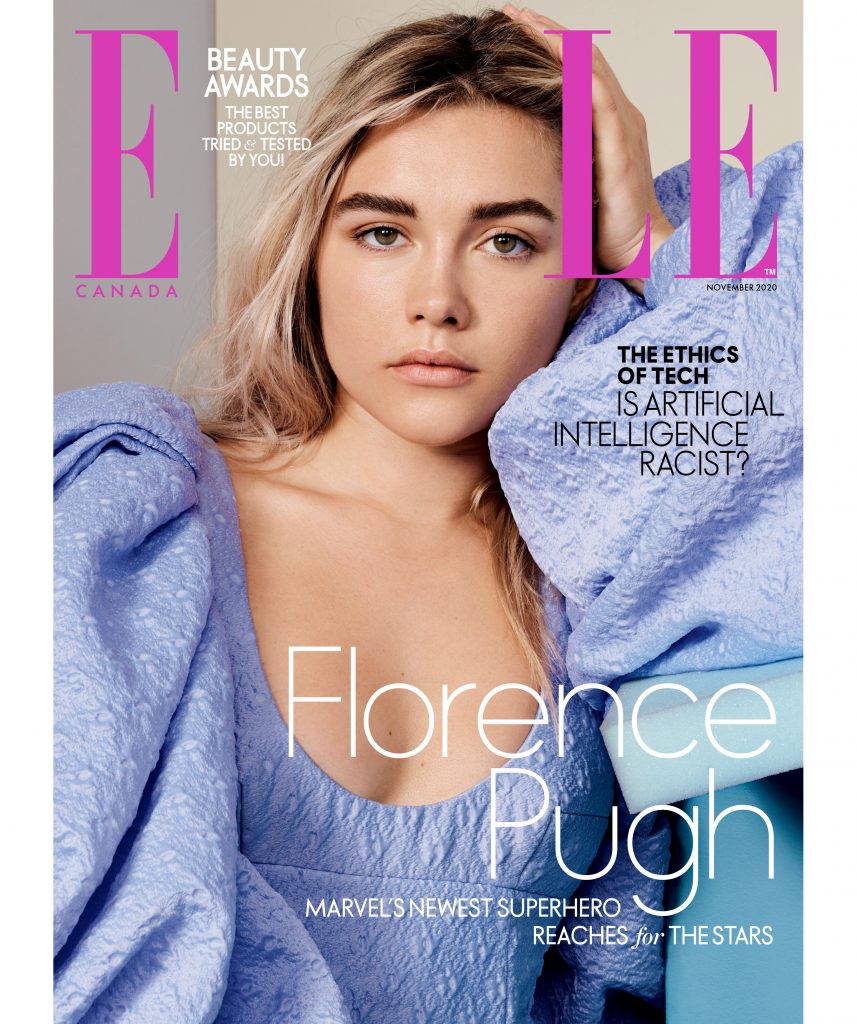 The November 2020 issue of ELLE Canada is available on newsstands across Canada and on Apple News+. Subscribe here.