How to make a great first impression at your next holiday office party. 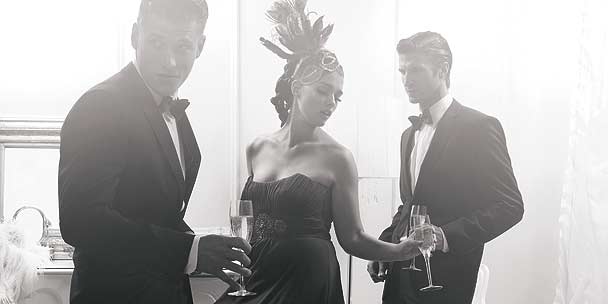 Proving that the world doesn’t always see us the way we see ourselves is the premise behind the hit TV show
Style by Jury. Candidates arrive for the make-over series thinking they are auditioning for the show when, really, the cameras are already rolling and a hidden jury of nine strangers are sharing their
first impressions of the candidate. When the jury is revealed, their comments are played back for the candidate before she is handed over to a team of image experts who have one week to give her a second chance at making a good first impression before a new jury.

"We choose people who lack a certain self-awareness about how they come across," says Carolyn Meland, executive producer. "There has to be something personal at stake, a story behind the cosmetic make-over." "It’s the back story that really keeps viewers tuning in," adds Bruce Turner, the host of the show. "We try and tap into some sort of inner struggle in each candidate and help them through it."

Don’t When it comes to your wardrobe, don’t ignore your body type! "Even if an outfit is dated, if it fits properly, you’ll make a better impression, rather than wearing something that’s up-to-the-minute that doesn’t fit," says David Clemmer, wardrobe consultant on
Style by Jury.

Do Ann Demarais advises her clients to find out the
dress code. "There are times to express your individuality and times to fit in. Most people prefer to talk to someone who seems familiar to them."

Don’t "If you still have the same haircut you had in high school, get thee to a salon," says Style by Jury stylist Francesco Fontana.

Do Go to a stylist who looks at the shape of your face and angles your hair accordingly so it opens your features and flatters the jawline.

Do "Choose a product that is two shades darker than the inside of your bottom lip."

Do "Opt for a velvety powder or cream polish that has a subtle shimmer." Overall, if a woman’s makeup is subtle and enhances her appearance, she’ll look competent and sophisticated, says Colvin. "The woman who looks like she was attacked by the beauticians at a Macy’s cosmetic counter says, at least to me, that she seeks attention — and no doubt she’ll get it, but the attention will not necessarily be favourable."

Holiday party tip#4: Wallflower
Don’t For most of us, the thought of walking into a room full of strangers is pretty intimidating. "Everyone has this fear," says Demarais, "but the body language you show when you arrive will affect how people see you and whether or not they decide to come over and strike up a conversation."

Do "Have the courage to introduce yourself," says Demarais. "It’s as simple as saying, ‘Hi, my name is Ann. How do you know the host? Isn’t this music great?’"

Holiday party tip #5: Personality test
Don’t "It’s amazing how much it turns people off when a self-important blowhard monopolizes a conversation," says Colvin.

Do Let others tell their stories and show by your body language that you’re actually listening, adds Demarais. Angle your body toward them and don’t cross your arms. Also, lean in slightly — if they can smell your breath, you’re too close. Maintain eye contact for at least five seconds at a time. It’s okay to glance away, but don’t be scanning the room or you’ll look shifty or disinterested.

Read more:
Get gorgeous for your holiday bash
Check out our must-have beauty products for this holiday season
The best holiday heels