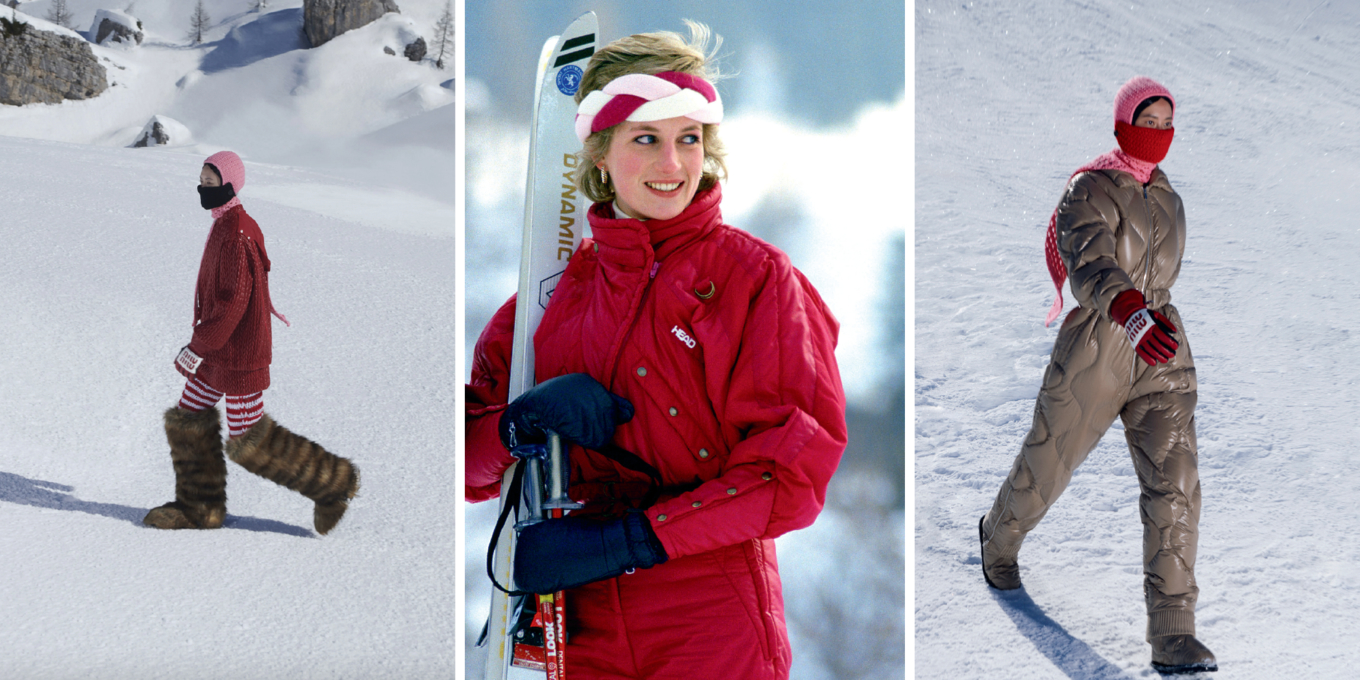 During a recent online press conference, following the unveiling of Miu Miu’s fall/winter 2021/2022 collection—which was photographed in Cortina d’Ampezzo, an Italian resort nestled in the Dolomite Mountains—Miuccia Prada talked about her slope-side childhood memories. “I remember [when I was] young and it was hot, you’d go skiing in your bikini,” she said. “It looks strange, but in the end, it’s not.” This sentiment is reflected in the brand’s hybrid wardrobe of pastel down jackets, quilted pants and delicate silk and sequined dresses that would make more sense on the apres-ski dance floor than on the actual hill. At the Chanel fall/winter show, the ski suit—clearly branded—also made an appearance, and it was a version that would be equally suited to the slopes of Courchevel or the cobblestones of Paris’ 8th arrondissement. At Prada and Emilio Pucci, the ski suit was figure-hugging, a nod to the tight-fitting style that was popular on the mountains in the 1950s. As for Thom Browne, he called on Olympic alpine skier Lindsey Vonn to endorse his collection, which included a yellow evening gown with a train that’s puffed up like a down jacket. Not very practical for slalom, but, as was the case with many of the pieces at Miu Miu, that wasn’t the point.

While winter sports have been gaining followers since the end of the 19th century, their popularity really started taking off in the 1920s. Elite tourists descended on St. Moritz and Chamonix, but there was no sporty style yet; men wore suits while women skied in skirts before adopting baggy pants, known as “Norwegians,” which they modestly hid under long coats. Fur and wool were the preferred materials of choice, but the latter had a major drawback: It absorbed melted snow like a sponge. At the turn of the 1930s, the fashion world started becoming interested in these snowy jet-set destinations. Brands and designers—Hermès, Madeleine Vionnet, Patou and Schiaparelli, among others—fell in love with alpine chic and began offering their rich clientele a wardrobe made for showing off at fancy resorts.

In 1947, Emilio Pucci came up with the idea for a ski suit, and the trailblazing outfit was on the cover of Harper’s Bazaar a year later. In 1952, German designer Maria Bogner designed form-fitting stretch pants made from nylon and wool. The garment, radically sexy at the time and available in more than 40 colours, was exported to the U.S., where it was popularized by Elizabeth Taylor, Jackie Kennedy and Marilyn Monroe.

As fashion continued to evolve, winter-wear brands—like Moncler (founded in 1952), Canada Goose (1957), Sorel (1962) and Kanuk (1970)—began appearing, and urban trends made their way to the mountains. Places like Gstaad and Megève saw the fluorescent colours of the 1980s make way for the baggy styles of the 1990s. But judging by Miu Miu’s collection this season is more about blurring the tracks by donning a babydoll with a balaclava and synthetic fur boots. We might not ski down the slopes in it, but we’ll have the right look for après-ski.

Read more:
10 Dupes for Rory’s Cream Sweater on Gilmore Girls
10 Jackets and Coats to Keep You Warm This Winter
Fuzzy Essentials for a Warm and Extra Cozy Winter Uniform