Are jumpsuits really what men want?

Everyone from Kenzo and Daks to Belstaff introduced jumpsuits on their fall 2015 men's runways. Can you handle the onesie? 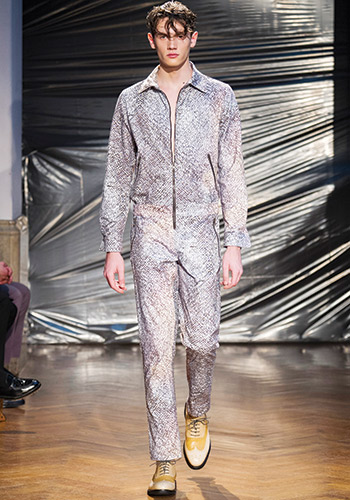 Miley Cyrus, Jennifer Lawrence and JLo have all been photographed wearing one. Hell, I bet even Malala Yousafzai, when she’s alone, polishing her Nobel Peace Prize, wears one. I’m talking about jumpsuits, which have lately become a womenswear staple. They have red-carpet-approved ones (Gigi Hadid wore a sequined one at the CFDA Fashion Awards), fishnet ones (Lady Gaga is the queen of sheer) and even denim ones (the ultimate Canadian tuxedo). They’re as ubiquitous as Stan Lee cameos in Marvel movies. But the trend itself wouldn’t really matter except for the fact that the one-piece as a feminine fashion statement is a total travesty.

Jumpsuit-wearing was once a man’s game. Test pilot Chuck Yeager wore one. Actor and race-car driver Steve McQueen too. Drs. Venkman, Stantz and Spengler–they all wore one. Okay, the last three are Ghostbusters, but you get the picture. Suiting up in a one-piece used to be a masculine endeavour. Wearing one transformed a man into somebody purposeful, serious, even superheroic. But now, through the power of female appropriation, the onesie has been reduced to style, fancy, just another fad. I’ll admit that what I’m about to say is irration­al, territorial, even sexist, but jumpsuits have started to feel like a girl thing.

READ MORE: Every time celebrities wore pyjamas out in public

That’s why I report now with great confusion that the one-piece has boomeranged back into the male wardrobe. And it has done so under a cloud of gender and sexual confusion. Balmain, Band of Outsiders and Belstaff all featured jumpsuits on the fall runways (and that’s just the “B” labels). Belstaff’s all-leather motor­cycle version comes with a kinky edge; 3.1 Phillip Lim’s parachute-inspired one with a stand collar has a flowy, I’m-not-wearing-anything-underneath allure. Then there’s Kenzo’s interpretation. Its trim silhouette in drab olive with dark contrasting panels on the shoulders and chest is both futuristic and mil­­i­taristic. It’s something you could wear if, say, your day job was to repair giant, Kaiju-battling robots.

In other words, guys, while the jumpsuit has come back, it’s different. Designers have carved out a spot for it on the catwalk, and in so doing have basically signalled the end of its purely utilitarian days. Because of that, and its unwavering status as a hot item in womenswear, the jumpsuit–once meant for fighting, flying and getting down and dirty–may never be manly again. At least, that’s what I’ve hypothesized.

Now, don’t get the wrong idea. I personally don’t adhere to traditional male ways of dress. Sure, I’m known for wearing suits and bow ties, both a mark of conservatism, but I also like to push the envelope. I might not be the onesie-wearing type, but I’ve been known to tie silk kerchiefs around my bare neck; I’ve even dared to wear seersucker shorts and a blazer to work. I’m not a square or a stiff, yet sometimes I do want my menswear to be menswear, my clothes to be clothes. If I did wear a jumpsuit, I would want it to be just a jumpsuit, not a fashion statement.

An experiment was in order.

I didn’t own a jumpsuit, so I checked around. I couldn’t find any at the men’s boutiques because the fall collections hadn’t yet been stocked, so I headed to a women’s shop. I tried to be low key as I browsed the skirts and billowy blouses. I saw some maxidresses hanging on a rack and thought maybe they’d be there. They weren’t. So I wandered into the lingerie section when a young sales clerk approached me with a phone in her hand. She said, “Can I help you?”

I cleared my throat and, with my most non-pervy voice, said, “I was told you have jumpsuits.”
“We don’t have any for men.”
“But I heard you, ahem, have some for women.”
She nodded and fussed with her phone. Was she calling 911?
“They’re one-size-fits-all. How tall is she?”
“It’s for me.”
She fiddled with her phone again. “It’s for an experiment,” I added.

The garment she handed me was made of black poplin. It had a zip front, a shirt collar and long sleeves. As I walked to the changing room, I thought about German anti-terrorist units. They wore black jumpsuits, didn’t they? I thought about the unity of the top and the bottom, like the coat of a panther, the body rippling underneath, stealthy yet ready for definitive, explosive action.

Here’s a thing I didn’t know about jumpsuits: You don’t
really put it on; you have to step into it. I wasn’t used to having my pants physically attached to my shirt. It’s awkward. I had to contort my arms and shoulders to put on the sleeves. The second I did the crotch up, it pulled and wedged into the crack of my ass. I also experienced discomfort due to the bifurcation in the front. Once it was zipped, however, everything eased. I bought it.

One morning, I put it on and sat at the kitchen table for breakfast. My wife said, “I don’t know if you’re my auto mech­anic or my lesbian lover.”
My first public appearance wearing it was a non-fiction workshop I presented at a university. Within an hour, I was covered in chalk from head to toe. There’s something about overall clothes…they’re just begging to get dirty. That felt manly.

But another thing I noticed was I lacked the comfort of shirt and pant layers over the pelvis. There was only a thin layer of poplin and cotton briefs between me and the world. I could imagine a circus-tent pole rising on a blustery day.

Then, during the washroom break, at the urinal, despite the long zipper in the front, I had a hard time getting the pony over the fence. I swayed side to side, as if I were a desperate man trapped in a straitjacket. And I was: Before the workshop started, I had downed an extra-large iced coffee. There just wasn’t enough length in the opening for an easy release, but I made it.

Because I was teaching non-fiction and memoir, I mentioned my entanglement to the class. One of the female participants, Ryleigh, shook her head and snorted something about how jumpsuits never should have been a woman’s game. She rolled her eyes, hinting at the burden—the incon­venience–of wearing one. She said, “Now you know what it’s like for women.”

And that’s how it went. It was women who had something to say about the jumpsuit. For example, a few days later, I had a meeting with a student named Zuri. That morning, I donned the jumpsuit again. And, once again, the moment I zipped up, macho images of astronauts and badass South Vietnamese fighter jocks danced in my head–that is, until Zuri blurted out that she thought I was wearing “pyjamas.”

Later that day, I went to buy some groceries. As the stay-at-home writer of the family, I do most of the cooking and cleaning. On the street, a tall, burly man walked toward me. He wore a hard hat, an orange safety vest and a rugged dirty blue jumpsuit. For some reason, I thought there would be a spark of recognition. That he would nod at me and I at him as jumpsuit-wearing brethren. But there was no acknowledgement. The gap between the real thing and mere pretend, mere fashion, was too wide. He walked on.
Outside the local greengrocer, my twin sons said hello to one of the local kids, Kay. Kay was eating an ice cream. His bicycle was leaning against a lamppost. I could tell by looking at the bike that the steering was loose.
“When you finish your ice cream, bring your bike over to our place,” I said.
“Okay.”

An hour later, with supper still waiting to be made, I had straightened the handle bars, tightened the headset, bottom bracket and pedals and changed Kay’s front tire, which was wearing through. The bike had never looked better.

Kay said, “Thanks, JJ,” before jumping on his bike and riding away.
My jumpsuit had bearing grease all over it. Its knees were scuffed and nearly frayed. It was drenched in sweat. It was too dirty and tattered to wear as a fashion item ever again. And, yet, it had never looked better.

Originally published in the Fall 2015 issue of ELLE Man.

READ MORE:
14 ways to wear denim that are anything but boring
A designer’s vision: Jeremy Scott
Gigi Hadid calls out her haters