These five models break taboos—and boundaries. We round up our favourite rebellious faces topping fashion news in Fall 2012. 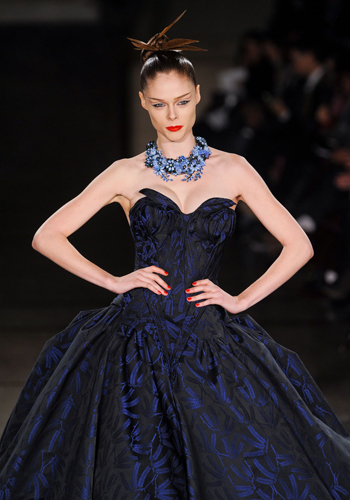 Who: One of Canada’s national treasures, Richmond, B.C.-raised Rocha was discovered at an Irish Dance competition in 2002, paying homage to her dancer roots (and becoming the talk of the industry) by opening Jean Paul Gaultier’s Scottish Highlands-inspired Fall 2007 show by Irish-dancing down the runway.

Rebel Cred: After being told she needed to “look anorexic” to become a successful model, Rocha embarked on a mission to raise health-consciousness and promote positive body image in the fashion industry—an undertaking that has come to characterize much of her career. In addition to solidifying her iconic status by being a perennial runway and editorial favourite (and by having her name dropped in a Kanye West song), Rocha continues to speak out against
the unhealthy pressure for girls to be ultra-thin, publishing articles on fostering self-esteem in
Seventeen Magazine, and leading by example through modelling in a Photoshop-free campaign with Canadian retailer Jacob in 2011.

Fall 2012 fashion news: With September covers for
VS, Flair Germany, ELLE Spain and
ELLE Korea, and a Fall 2012 campaign video for White House Black Market that has her competing in a dance-off against herself, it’s a safe bet that you’ll be seeing plenty of Coco Rocha this fall.

Who: Arguably the rebel model poster girl, Moss debuted in the early ‘90s as the original, heroin-chic waif—a drastic contrast to the Amazonian figures that had previously dominated the modelling world. She’s since gone on to grace 52 Vogue covers, design her own clothes for Topshop and cosmetics for Rimmel London, and (is it just us?) continue to get more beautiful every year.

Rebel Cred: Moss’s rebel-cred reads like a laundry list of wild-child defiance. Singlehandedly cause and then recover from the biggest celebrity drug scandal of the aughts? Check. Have a nude likeness of herself cast in gold? Check. Pole dance in music videos, date unstable, rehab-hopping rock stars, and ultimately marry a lead guitarist? Check, check, and check (you’re a lucky man, Jamie Hince).

Fall 2012 fashion news: Moss’s career shows no signs of slowing down this fall —the ever-waifish siren rocks colour-block dresses and boots in an ad campaign for Mango, and looks at home posing for Craig McDean in leather shorts and black coats for Rag & Bone’s urban-chic Fall 2012 ads.

For more of our fave top model rebels and hottest Fall 2012 fashion news, read on to the next page…

Who: Born in HeBei, China, 24-year-old Sun made a name for herself after Karl Lagerfeld handpicked her to open his Paris-Shanghai pre-fall collection in 2009.

Rebel Cred: Sun’s unconventional, rebel-elegant look, characterized by her high forehead, full eyebrows, and challenging glare, garnered her substantial attention during the 39 shows she walked in her first season. She’s since caught the eye of designers at Thierry Mugler, Louis Vuitton and Dior, which showcased her striking, more-spice-than-sugar splendour in their Spring 2012 beauty campaign.

Who: Shalom Harlow’s career took off after she was scouted rocking out at a Cure concert, transforming the brunette tomboy from Oshawa-dwelling, self-professed hippie to a household name synonymous with glamour during the supermodel fervour of the 1990s.

Rebel Cred: Whether it’s seamlessly transitioning from the runway to Hollywood and back, taking risks during photo-shoots (we’re thinking of her spontaneous flash for Oyster Magazine), or boldly returning to the modelling world at 38, an age at which most runway stars would be long retired, Harlow, proves that rules are meant to be broken.

Who: More than just a pretty face, Beverly Johnson made history when she became the first black women to appear on the cover of Vogue in August 1974.

Rebel Cred: Confident with her “supernatural girl next door” look, allegedly when Johnson was asked how it felt to be the biggest black model in the business, she said that she wasn’t simply the biggest black model, but "the biggest model, period." Self assured and successful, Johnson graced the covers of Glamour, ELLE, and Harper’s Bazaar, walked the runways for legendary designer Halston, and dabbled in music and acting. Most recently, Johnson was chosen as one of the iconic models to be featured in Timothy Greenfield-Sanders’ documentary, About Face: The Supermodels Then and Now, which focuses on the modelling industry and the vagaries of aging, and which premiered to acclaim and this past Sundance Festival.

Fall 2012 fashion news: This year marks Johnson’s self-proclaimed “reinvention,” as she launches her own beauty line—Beverly Johnson Luxurious Lifestyle—and stars in a reality TV series on Oprah’s OWN Network.