Find out what today's savvy celebs are launching their own fashion lines as fast as you can say ka-ching! 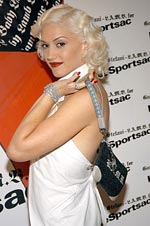 Madonna has done it. Bono is doing it. Sean “P. Diddy” Combs did it, and when his ex-girlfriend, Jennifer Lopez, finally did it, it became de rigueur. The latest trend among celebrities, along with the raw food diet and kabbalah, is to step into the fashion world, not as models, muses or front-row fixtures, but as designers themselves. “All hell broke loose when Jessica Simpson, Paris Hilton, Ryan Seacrest and Pamela Anderson debuted their new lines on the same day,” says David Wolfe, laughing as he recalls his February trip to MAGIC, the biannual clothing and accessories trade show in Las Vegas. “These jaded retailers were falling over themselves to get a glimpse of the celebrity or to get an autograph for their kids.” The garments didn’t impress Wolfe, creative director of The Doneger Group, a fashion merchandising and consulting firm in New York. “No-talent celebrities who ‘became’ designers — the clothes are for peasants,” he scoffed.

Instead of a pedestrian trade show, Jennifer Lopez chose New York’s prestigious Fashion Week to launch her newest label, Sweetface. The Hispanic singer was the only celebrity “designer” on the roster in a week packed with 66 runway shows featuring established U.S. names such as Vera Wang and Kenneth Cole. And even though J.Lo reportedly didn’t do the sketches or cut fabric, her presence at North America’s most influential style event highlighted the fact that she is her generation’s top brand. “Nobody is kidding himself or herself thinking that Jennifer Lopez sat in a closet somewhere frantically sewing,” says Fern Mallis,
executive director and vice-president of IMG, the marketing and entertainment firm behind Fashion Week in New York and L.A. “But it’s an interesting and unique moment in our culture. The gates have been opened and we’re not going to see the end of this trend for some time.”

While it’s definitely hot now, celebrities have been dabbling in fashion for decades. Perhaps one of the first stars with a label was tennis legend Jean René Lacoste, whose famous alligator-logo shirts, which debuted in 1933, are enjoying a renaissance. Jack Nicklaus lent his name to golf apparel in the ’60s, and in 1985 Jaclyn Smith introduced her casual-wear line at Kmart. As for the roots of the current craze, industry veterans talk about two men: music mogul Russell Simmons, who launched the hip hop line Phat Farm in 1992; followed by Combs in 1998, with his Sean John label. Then J.Lo introduced her line of belly-baring threads in 2001, and the fashion floodgates opened wide. Since then, more than 40 names — including Elizabeth Hurley, Jessica Simpson and Gwen Stefani — have left their perches along the catwalk to launch collections. One of the few high-profile celebs to buck the trend is Sketchers spokesmodel Christina Aguilera. “I just think it’s so tacky,” she reportedly said. “I have always thought that [having a clothing line] is one of those things that just makes people look like they don’t know what to do any more.”

Aguilera may not be entering the rag trade, but in the future, every A-, B- and C-list star will be expected to develop a brand, predicts Adriane Jamison, an L.A.-based celebrity stylist who has worked with Usher and OutKast. “You’re going to have an album, a book deal, cameos on TV shows, a movie, perfume and accessories and now a clothing line.” Shelly O’Neill, CEO of Rootz Media, a PR and marketing agency in L.A., agrees, adding it comes down to basic economics. “Not every star is going to stay on top forever, so they need to make as much money as they can while they’re on top.”

And just how much money is out there to tap into? According to Charles Riotto, president of the Licensing Industry Merchandisers’ Association, celebrity-licensed fashion products accounted for US$15.5 billion in retail sales in the United States — out of US$307 billion spent on shoes and clothing in 2003.

Photo courtesy of Kevin Mazur/wireimage.comAlthough more celebs are entering the fashion industry, there’s little financial evidence to suggest they pose a big threat to high-end designers, notes Barbara Atkin, Holt Renfrew’s fashion director. Many celebrity lines fall under the banner of urban apparel, are sold in large department stores and go after a different customer. It’s not wealthy socialites and movie stars scooping up the jeans, sweaters and handbags — it’s middle-class teens, says Atkin. Young people may be drawn to the lines because it’s a way for them to express allegiance to a celebrity, notes Andrew Bolton, associate curator of The Costume Institute at The Metropolitan Museum of Art. “Since so much about a singer’s identity is about their self-presentation, it seems like a natural step for the singer to promote their own fashion collection as a way of asserting their image, music and lifestyle. But even the most ardent fan won’t buy clothes that are not fashionable.”

In interviews following the New York shows, Bolton suggested that celebrity designers are entering the biz to mould their fans into their image. “Coco Chanel also tried to mould women into her own image and expressed her modernity through her allegiance to her lifestyle,” he said. “Celebrities are doing the same thing.” It’s one thing for a legendary designer such as Chanel to inspire looks based on her own image, but what impact will celebrity designers have on 21st-century fashion? “Celebrities are democratizing fashion,” says Atkin. “Their labels are for the masses. We used to revere true fashion designers as crystal ball gazers for leading us into the future with something unique and creative. For celebrities, it’s really about merchandising.” Even J.Lo acknowledges she’s more the muse than the creative genius behind her line.

“Let’s be real. I’m obviously not at the level of a John Galliano. But I do have a certain style and a certain image that people respond to,” Lopez told Women’s Wear Daily during a round of post-show interviews. Maybe so, but who died and made all these celebrities think they’re fashion gods, asks Elisa Bruley, owner of a popular Pasadena boutique stocked with lines by mainstream as well as little-known designers from L.A., San Francisco, New York and Seattle. On principle, Bruley refuses to stock celebrity labels, except for the L.A.M.B. line because she considers Stefani a genuine designer who’s not just in it for the money.

The lead singer from No Doubt may be the exception, according to one L.A. designer who wanted to remain anonymous. “It’s just about greed,” she said. “How would people react if tomorrow Karl Lagerfeld or I decided to put out albums? They would laugh.” What really rankles this designer is that behind many celebrity labels are hives of worker bees — often fashion students — who aren’t likely to get name recognition or a decent share of the profits. “They don’t put the real designer’s name anywhere, which is horrible, whether you are a senior designer or a student,” she says.

Wolfe’s advice for struggling students and other unknown designers is to “get on a sitcom, become a star and then pursue your true passion in design.” Looking ahead, he says he’s waiting for a fashion messiah — someone like Audrey Hepburn, with class, elegance and an education. “In the meantime, I predict that Elton John will launch plus-size menswear and that food is the next frontier. J.Lo burgers. Who wouldn’t want to eat that?”