Check out what's hot this month in film! 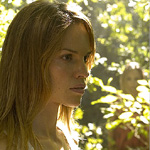 Nelly Furtado lets loose in an interview with ELLE Canada! Check it out here!

Awards season is finally behind us, but if you can’t get your fill of celeb-stuffed shows like the Academy Awards, the month of April has a slew of films boasting Oscar-winning actors. Halle Berry, Hilary Swank and Anthony Hopkins all have enjoyed their share of successes since winning their golden statues, not to mention a few stinkers. (Case in point: Ms. Berry in Catwoman. Meow! Talk about a mound of kitty litter!) Will they be able to continue their winning streaks or suffer the fate of that dreaded post-Oscar slump in their latest offerings? We’ll let you be the judge from the film plots listed below.

Hilary Swank takes on the role of Katherine Morrissey, a former Christian missionary who loses her faith after her family is killed in a tragic accident. Fast forward to the present, where Katherine has become a well-respected university professor who’s world-renowned for her ability to debunk religious phenomenon. When she’s called upon to investigate a sleepy Louisiana town besieged by a series of Biblical plagues, Katherine soon realizes that science can’t readily explain away her findings, and is forced to find her faith in order to fight the forces of evil running amok in this small-town community. Falling somewhere between the film Signs and an episode of Mythbusters, we’re hoping Swank’s newest outing is a knockout like Million Dollar Baby rather than a crash-and-burn fest like The Core.

Perfect Stranger stars Halle Berry as Rowena Price, a New York City newspaper reporter who has mastered the ability of exposing other people’s secrets. When her childhood friend Grace is found murdered, Rowena goes undercover only to discover Grace was having an affair with married advertising mogul Harrison Hill (Bruce Willis). With the help of her associate Miles Haley (Giovanni Ribisi) Rowena takes a job as a temp at Hill’s ad agency, while posing as “Veronica,” one of Hill’s online love interests. Berry takes on challenging territory, flexing her acting muscles to play multiple characters in her newest vehicle. We’re not sure how Berry will stack up to her award-winning performance in Monster’s Ball, but with a solid cast backing her up, this film should easily make for entertaining fare.

When Ted Crawford (Anthony Hopkins) discovers his beautiful young wife is having an affair, he devises the perfect murder, only to evade sentencing as a result of a series of legal technicalities. Ryan Gosling turns in an arresting performance as Willy Beachum, the up-and-coming assistant district attorney who becomes a crusader in bringing Crawford to justice. Hot off his Oscar-nominated role in Half Nelson, Gosling taps his inner Clarice Starling to go up against Hopkins’ Lecter-lite performance in this sturdy popcorn thriller.

Check out these hot stars who are making a difference!