Harris will reportedly become the first woman of colour to be a Vice President in the U.S. following Biden's projected presidential win. 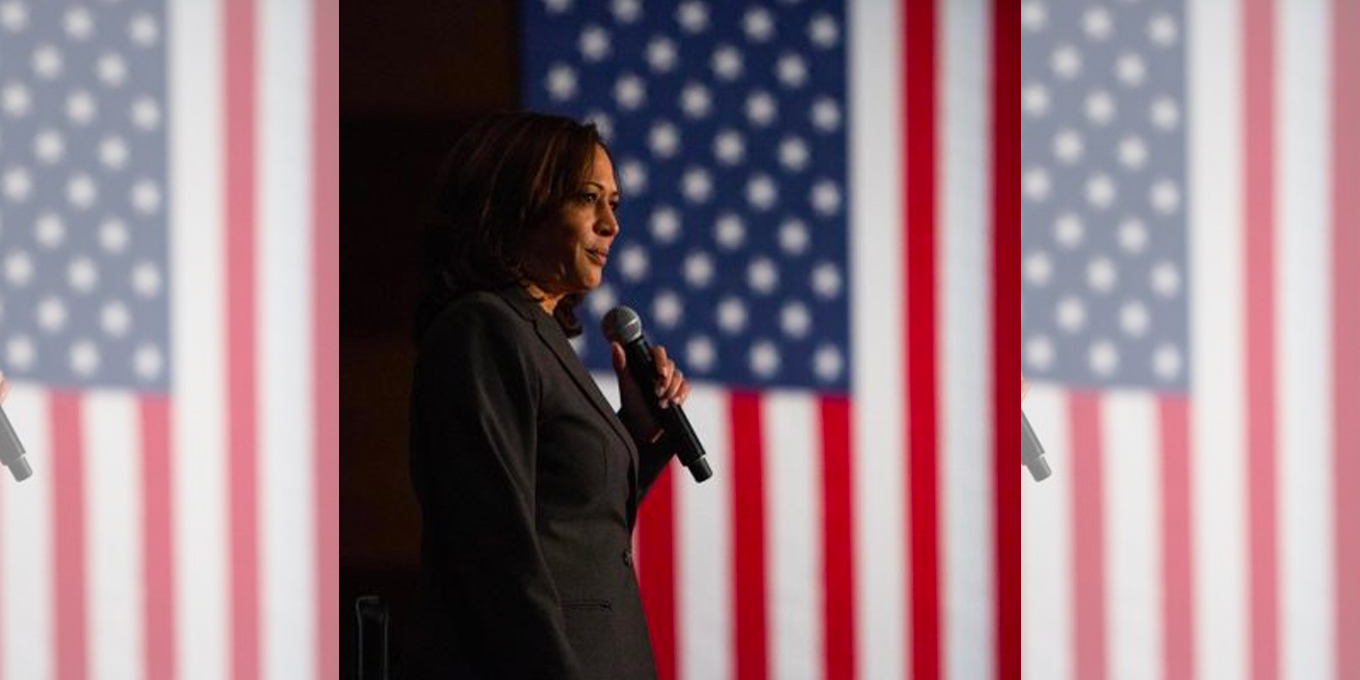 Joe Biden, the President-elect of the United States, and former senator Kamala Harris have just made history.

On Saturday November 7, numerous news publications such as the BBC and the Guardian projected that Biden and Harris have won the 2020 Presidential election.

The projected news means that the former Democratic presidential nominee is to become the oldest President-elect ever to hold the title at 77 years old. His win also means that Harris will be the Vice President-elect of the U.S., making it the first time in history that a woman, a woman of colour, and an Asian-American will have been elected to the position in the White House. Harris is a former California senator of Indian and Jamaican heritage.

Following hours of projections that the pair were heading to the White House, the VP-elect shared a video of herself on social media on the phone to Biden.

“We did it, we did it, Joe. You’re going to be the next president of the United States,” she says on the phone, dressed in exercise gear outside before laughing with joy.

We did it, @JoeBiden. pic.twitter.com/oCgeylsjB4

Her husband Dough Emhoff subsequently tweeted: “So proud of you,”

In the U.S., the Vice President-elect is who takes over if anything happens to the President-elect. Donald Trump, who was running for a second term for the Republicans, chose to continue with his VP, Mike Pence in the 2020 election. 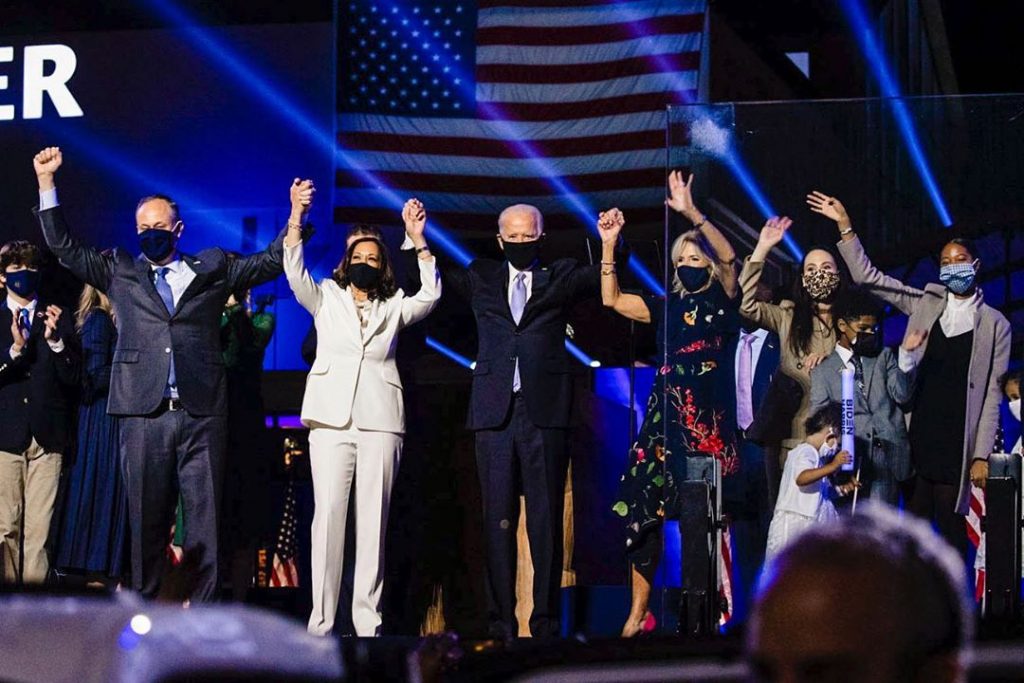 Who is Kamala Harris?

Harris was born in Oakland, California to an Indian mother who worked as a doctor specialising in breast cancer and a Jamaican father, who later became an economics professor at Stanford, and has a sister Maya – a lawyer, TV commentator and former staffer for Hillary Clinton. She grew up in Berkley where she attended a formerly all-white school joining only the second class to become integrated in the 1960s. Following her parents’ divorce, Kamala moved to Montreal, Canada with her mother and attended high school.

Harris attended the prestigious historic Black college, Howard University in Washington DC and later law school in San Francisco. She successfully passed the Bar in California and became a lawyer. 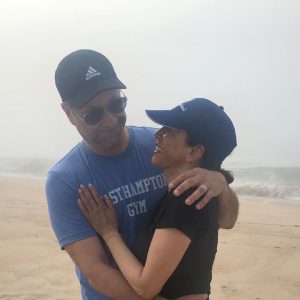 Harris married entertainment lawyer Doug Emhoff in 2014 and is stepmother to his two children, Cole and Ella.

Harris rose up the legal ranks pretty quickly firstly starting out prosecuting in district attorney’s offices specializing in cases involving the abuse and neglect of children. In 2004, Harris was elected the first Black female District Attorney for San Francisco. Six years later, she made history again when she became the first Black female woman to be elected California’s Attorney General where she worked on legalizing gay marriage, defending the state’s climate change law, and “prosecuted transnational gangs who drove human trafficking, gun smuggling and drug rings”, according to her website.

Harris has previously argued that her background in law makes her an ideal person to reform the U.S.’ criminal justice system including ending mass incarceration and invest in community programmes to reduce and prevent crime.

Harris has also had to explain and defend her previous “tough on crime” stances including opposing the legalization of marijuana (which she now supports) and pushing for higher bail costs in the early 2000s. The 55-year-old has said in response she is now able to move in line with more progressive thought and temperaments in society.

Kamala Harris as a senator

In 2016, Harris left law after she was elected as a senator for the state of California. As senator she has sponsored bills to ensure migrants rights are protected, various legislation to support those living in federal housing like installing carbon monoxide detectors and reviewing eviction laws as well as bills supporting survivors of sexual harassment.

As senator, she has sat on committees for homeland security and intelligence and federal relief to natural disasters and events including Covid-19. She has voiced her opposition to many of Trump’s policies including the travel ban of people from several Muslim-majority countries.

Harris was also on the committee hearing of Trump’s supreme court judge nominee Brett Kavanaugh, who was accused of sexual assault by Dr. Christine Blasey Ford (which he denies) .

During the hearing, Harris famously asked Kavanaugh if he can think of any “laws that give government the power to make decisions about a man’s body”. Trump has since criticized Harris for being “mean” to Kavanaugh, who successfully became a supreme court judge.

When Kavanaugh was confirmed as a supreme court justice, Harris criticized the decision, saying in a statement:“As a former prosecutor, I have led investigations and I have tried these cases in a courtroom. I have spent countless hours with assault survivors. And when I look at what has occurred over these few days, we have fallen short in fulfilling our constitutional duty to fully evaluate Judge Kavanaugh’s nomination. This process has been a disservice to Dr. Ford. This process was a disservice to survivors everywhere. And this process has been a disservice to the American people.”

Though she is currently on the campaign trail ahead of the November 3rd election, Harris is still working in her capacity as a senator which has involved sitting on the committee of the supreme court judge hearings.

This week, hearings on Donald Trump’s nominee Amy Coney Barrett as a replacement for the late Ruth Bader Ginsburg, began despite objections from Democrats – including Harris – who argue that the nominations, hearings and selection should be postponed until after the election.

Harris acknowledged these feelings during the hearing – which she joined via video call – and referred to as “illegitimate”. A more subtle approach was then taken when Harris removed a photo of a child behind her to make a point, and revealed the children’s book I Dissent about Bader Ginsburg in the background.

Harris continued to praise the late Supreme Court justice as someone who “devoted her life to fight for equal justice, defending the constitution and advocating for human rights and equality”.

Kamala Harris as a presidential candidate

In January 2019, Harris announced her intention to run as presidential candidate for the Democrat nominee for 2020. She was supported and donated to by various notable people including Shonda Rhimes, Ben Affleck, Mindy Kaling and Reese Witherspoon.

Lol I cropped everyone out sorry guys love you (2016 HELLOOOOOOOOOO) MADAME VICE PRESIDENT!!!!!

Harris appeared at various debates along with other candidates and clashed with Biden, who she is now supporting as his Vice President, on his history of racial issues.

Harris pulled out of the race in December, citing a lack of funds though had been trailing in the polls in the months leading up to her decision.

I always listen when @kamalaharris talks. This was DNC 2016. Glad to have this smart as hell, insanely competent leader on the 2020 ticket. Let’s go. #bidenharris2020

During her time as a candidate, Harris was imitated on Saturday Night Live by its alum Maya Rudolph.

Reacting to the news of Harris being picked as VP by Biden, Rudolph had the best response, telling Entertainment Weekly: “Oh Sh*t… That’s spicy.”

The Bridesmaids star has already reprised her role as Harris since the announcement, portraying her in a sketch depicting the Vice Presidential candidate against Mike Pence on Saturday Night Live.

During the sketch, Rudolph repeatedly said: “I’m speaking”, the phrase which Harris delivered to Pence when he tried to talk over her, and a phrase which has already become iconic in this presidential race.