The latest hobby trends, from draghunting to beekeeping, have made the fashion jet set a little bit country in the middle of the big city. 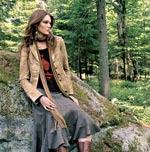 Sex and the City was so yesterday. Today, women are forging new lifestyle trends that have them leaving the Manolo’s at home and opting for more down-to-earth savoir-faire.

Garden party
Some people call it urban agriculture; others call it urban homesteading or hobby farming. These are fancy names for growing food in your backyard. Taking their cue from immigrant communities, like the Chinese or Italians, the rest of the population has caught up by cultivating in their backyards, allotment gardens and on rooftops. Michael Levenston, executive director of the Vancouver-based organization City Farmer, says that the waiting list for allotment gardens in Vancouver has quadrupled in the past year. “It’s the desire to get out of the condo and touch the earth.”

In stitches
“Quilts are not for beds anymore. Quilters are stitching, embroidering and beading their quilts and drawing directly on them; they’ve become canvases on many levels,” says New York-based quilter Jeri Riggs, who belongs to two Internet “quilting bees.” Like scrapbooking, quilting is a memory-making hobby. Both are huge trends, according to Liz Ludwig, association manager of Canadian Crafts & Hobbies Association. “People are starting to take an interest in preserving their memories,” she says. “That is why quilting is big, because it has to do with heirlooms and hand-me-downs.”

Bumble and bumble
Olivier Darné is a French graphic-artist-cum-beekeeper. The minimalist urban hive he designed, called le butineur urbain, for Paris’ summer street festival last year consists of a telephone-booth-size stainless steel box with a separate entrance and exit for bees to zoom in and out, honeycombs in neat wooden drawers and a viewing window so that spectators can watch the bees in action. Darné lives in the immigrant-dense Paris suburb of Saint-Denis. He says that when he entered his honey in a national blind-tasting competition several years ago, his friends mocked him, saying that his honey “would taste like a traffic jam.” As it turned out, he won first prize. “The bees picked up pollen from all the different exotic plants the immigrant families in Saint-Denis brought back with them from their native countries,” he says, “and it made for a very rich and interesting flavoured honey.”

Wave rider
Lynn Chick had a posh New York job working at the prestigious Lehmann Maupin gallery. Then one day last year she chucked it, moved to Tofino B.C, and tool up surfing full time. “I used to surf a lot in New York,” says Chick. “I would hop on the A train with my surfboard and take the hour ride out to Rockaway to surf whenever I could.” Chick is just one of the many women who have thrown everything over in the quest for the perfect wave. Many go to Tofino, which has become a mecca for girl surfers living out their Blue Crush aspirations. The seduction? “I just love being in the ocean,” says Chick. “It’s so powerful and beautiful; I’m constantly humbled when I go out.”

Lethal weapon
If you’re dozing in the cobra position, it’s time to kick butt Kill Bill style. The collusion between hip hop and kung fu gives the ancient Shaolin sport serious street cred. At the USA Shaolin Temple in Manhattan, 34th Generation Shaolin Temple Fighting Monk Shifu Shi Yan Ming has trained the likes of Wesley Snipes, John Leguizamo and the RZA of Wu-Tang Clan. “There has been a general trend toward Asian culture and philosophy,” says Sophia Chang, Yan Ming’s Korean-Canadian partner and temple manager. “At the USA Shaolin Temple, the most dramatic increase in enrolment has been in women students who want a regimen that is more aerobic than yoga, more engaging than the gym and offers a mind/body/spirit experience.”

Foxy lady
The politically correct version of fox hunting, draghunting originated in the mid-19th century in England. Instead of a live fox, riders and hounds pursue a scent trail concocted of animal urine, mineral oil and water. Draghunting is an admittedly expensive sport, but it’s a burgeoning weekend pastime for those who want the thrill of the chase without the bloodletting. ” A lot of our members grew up with pony clubs, then they started their careers and moved away from horses,” says Kathrine von Trebra, one of the joint masters of B.C.’s Fraser Valley Hunt. “This is their way of coming back to horses. It’s an outdoor, non-competitive sport. People who enjoy riding love the excitement of it.”