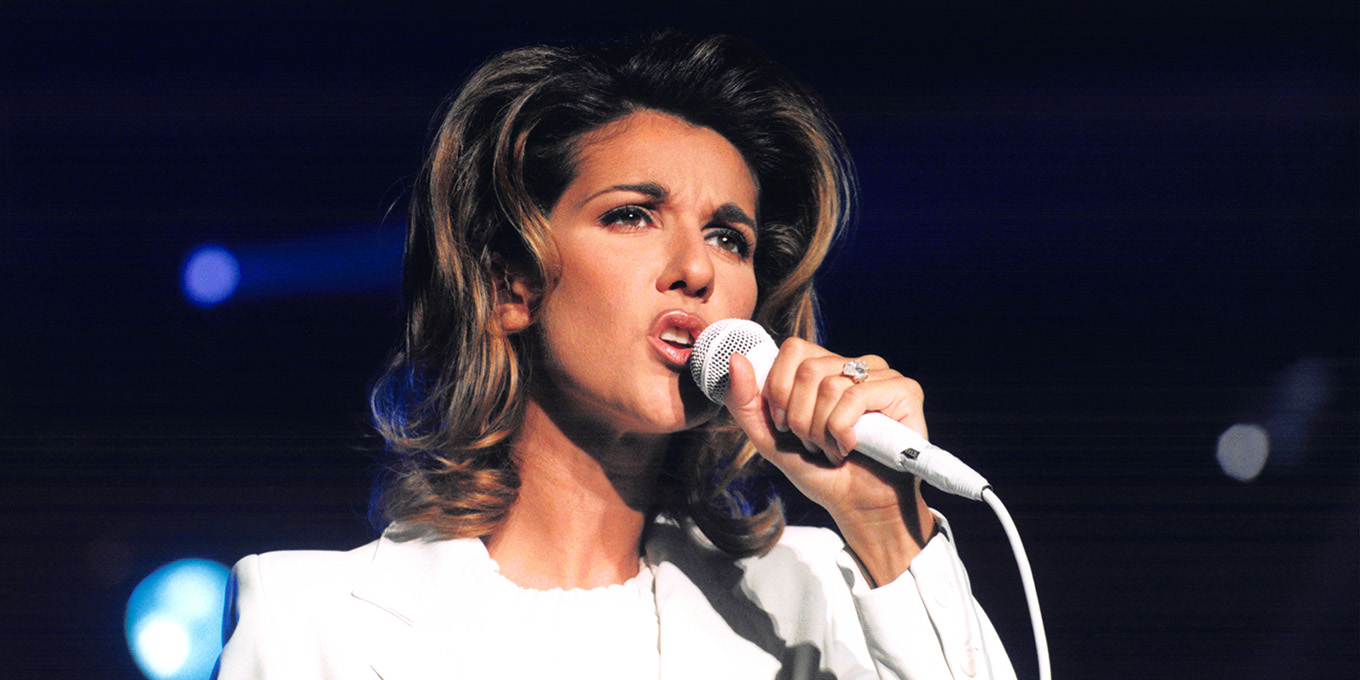 In March 1997, just days ahead of the 69th Academy Awards at which “Because You Loved Me,” the soundtrack to Up Close & Personal and a chart-topping single from her fourth English album, Falling into You, was nominated for Best Original Song, Céline Dion appeared on Oprah. As the episode began, Oprah Winfrey introduced the Charlemagne, Québec singer as one of America’s musical sweethearts, with an unmistakable five-octave voice that garnered comparisons to Whitney Houston, Mariah Carey, and Barbra Streisand. “She calls her own life a fairytale,” Winfrey narrated, “and that proves the power of love and the power of dreams.”

Following the opening montage, Dion ran out onstage, embraced Winfrey warmly, and launched into a performance of her Oscar-nominated song. Minimal backing production spotlighted the stratospheric heights of Dion’s voice at centre stage. The camera panned to Winfrey, hand firmly pressed to her cheek. She rocked back and forth in her seat, singing along, her eyes misty, the emotional reaction reflective of Dion’s capacity to pierce the softest, most vulnerable parts of the heart. On the last verse, Dion paused for dramatic effect—shrugging her shoulders up to her ears and breaking into a sweet, playful smile, her eyes glittering—before delivering the song’s final line. The audience were on their feet.

Later on the show, Dion performed a medley of her hits. She was charming and down-to-earth in the interview segments, her goofball sense of humour in full force. Her late husband and longtime manager, René Angélil, sat front row, and the love between the two was palpable. Winfrey eventually brought out Dion’s parents and 12 of her 13 siblings as a surprise. The family performed “Ce n’était qu’un rêve,” Dion’s debut single written by her mother, Thérèse, and her brother, Jacques, to help launch her career in the early ’80s. Tears flowed as Dion sang “Fly,” a heartbreaking tribute to her niece who died of cystic fibrosis. “I think a lot people can relate to it,” Dion told Winfrey afterwards. “One day or another, we lose a friend, we lose people that we love. And these songs cannot change it—they cannot come back—but it might help them to go through this difficult moment.” “Fly” is the closing track on Falling into You. 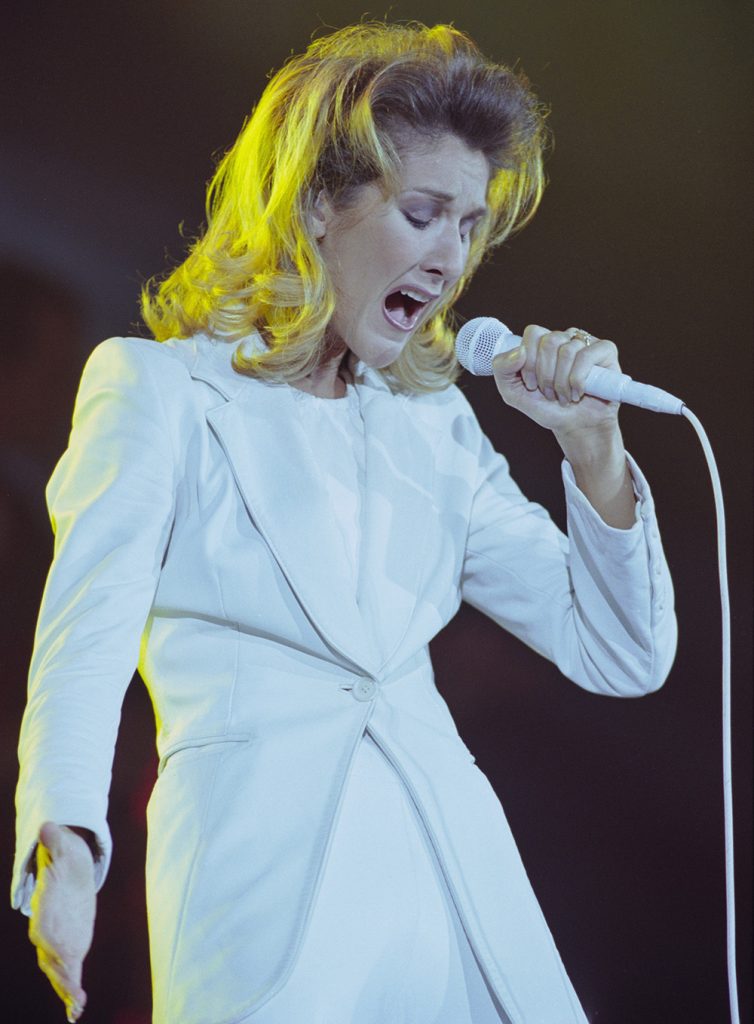 It’s heartwarming watch, but, more than anything, the episode stands as a portrait of Dion during a pivotal moment in her career, bridging her years of hard work as a young Francophone singer with her rise to prominence as one of pop music’s most accomplished vocalists. 1997 would be a tremendous year for Dion: Falling into You earned her sweeps at the Juno and Grammy Awards, there was the Oscar nomination, and November saw the release of Titanic and its iconic theme “My Heart Will Go On,” launching her into a superstardom of mythic proportions.

But Falling into You was a springboard for it all—and 25 years after its release on March 7, 1996, the impact of the album (and of Dion, herself) on modern pop music is immeasurable. Alongside the seminal works of Mariah Carey and Whitney Houston in the nineties, the album helped shape genre trends of the era and cemented the enduring relevance of the heartfelt power ballad in a cynical musical landscape that still sneered at sentimentality. 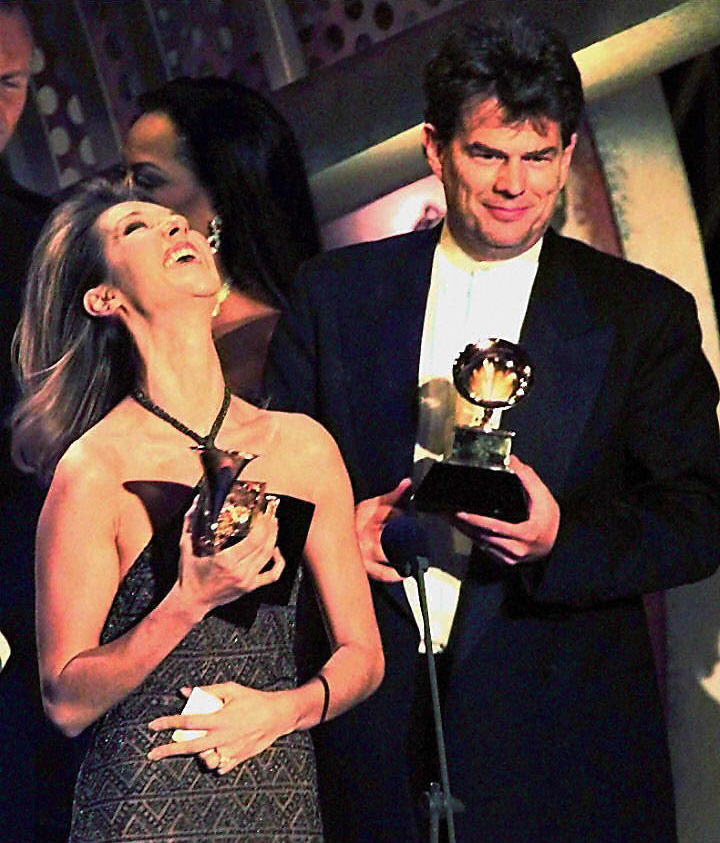 Céline Dion and producer David Foster, seconds after Dion won the best Pop Album and Album of the Year Grammys for "Falling Into You." 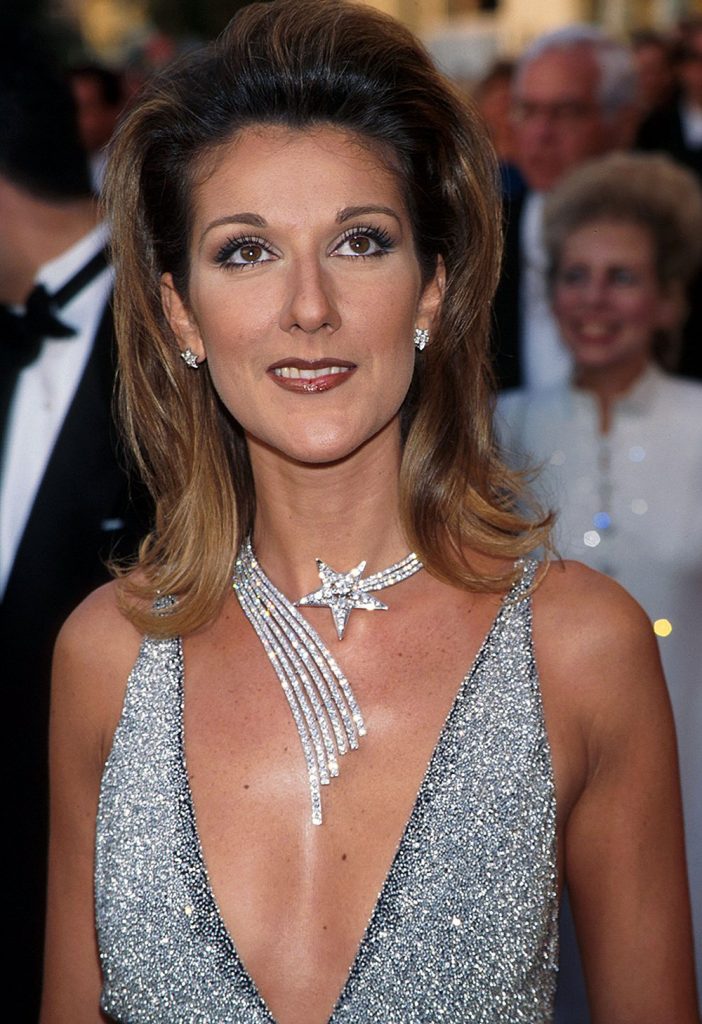 Céline Dion making an entrance on the red carpet of the 69th Academy Awards.

Dion has always been an exquisite balladeer and there are many moments in her early French catalogue—particularly 1987’s Incognito with its saxophone solos and echoing drums—where rumblings of the sonic melodrama she’d later become synonymous with started to emerge. As Dion released her first English album, Unison, in 1990, with its single “Where Does My Heart Beat Now,” her signature grandiose sound further developed under the production of David Foster, who would become one of Dion’s most frequent collaborators. With Foster, the soundscapes were glossier, more lush, and perfectly highlighted the emotional intricacies in Dion’s voice. Dion found similar creative kinship in songwriter Diane Warren and the pairings came together beautifully on Dion’s next English efforts, Céline Dion and The Colour of My Love, turning out international hits such as “If You Asked Me To,” “When I Fall in Love,” and “The Power of Love.”

Falling into You, too, features Foster and Warren—Foster produced a handful of tracks, including “Because You Loved Me, which Warren penned—and, like its predecessors, the album also largely explores romantic terrain. Now in her twenties and her relationship with Angélil public (“René, you’re the colour of my love,” she revealed in The Colour of My Love’s liner notes), the innocence that accompanied themes of love and reverie Dion sang about as a teenager matured into passion and longing driven by a rawer intensity. But on Falling into You, love is more all-encompassing than ever, contemplated with booming and unapologetic gusto. And nothing captures it better than “It’s All Coming Back to Me Now,” the album’s epic opening track.

Writer and producer Jim Steinman, known for his Wagnerian pop operas for Meat Loaf and Air Supply, wrote “the most romantic, passionate song” he could, taking inspiration from Wuthering Heights. The song itself has an interesting backstory involving Meat Loaf (he initially wanted it) and pop group Pandora’s Box (they recorded it first). But Dion was perfect for it: her resonant vocals soar above nearly eight minutes of thundering piano chords, bombastic drums, and howling winds. Andrew Lloyd Webber called it “the greatest love song ever written” and Dion’s version “the record of the millennium.” 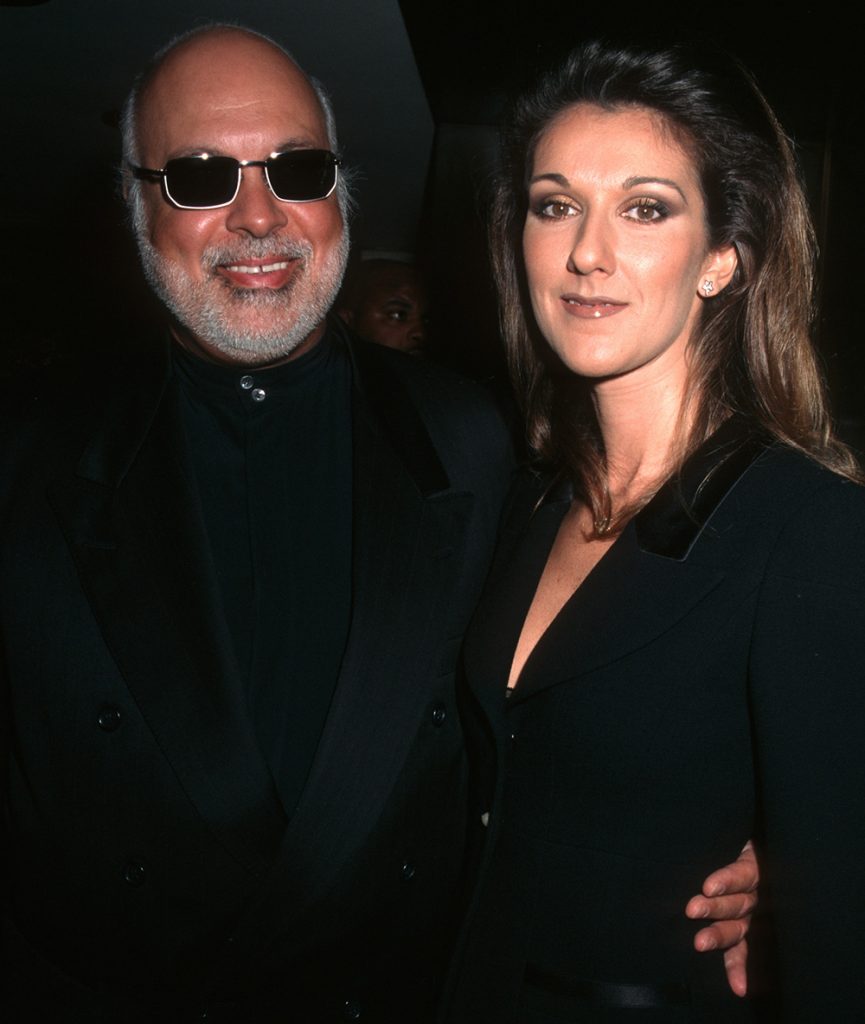 Céline Dion and René Angélil in 1997.

The theatrical essence of “It’s All Coming Back to Me Now” set the tone for the sprawling love songs that followed: “All by Myself,” an earth-shattering cover of Eric Carmen’s 1975 classic (and one of Dion’s best-ever performances); “Because You Loved Me,” with its soft grandeur; a rollicking treatment of Ike & Tina Turner’s “River Deep, Mountain High;” “Seduces Me,” an aching ballad partnered with Spanish guitar. Beyond romantic love, Dion offers expansive takes on some of the deepest corners of human experience and conveys them with gravitas. Grief is addressed with a swelling hopefulness on “Fly,” while spirituality is all but outright named on “Call the Man.”

Falling into You showed artistic growth in Dion, augmented by a nuanced emotional expression where her crystalline vibrato reached some of its most illustrious heights. The album received critical acclaim and was a commercial triumph, Dion’s first number one album on the Billboard 200. It yielded four singles that topped charts around the world and still stands as her best-selling album—and one of the best-selling albums of all time—to-date, at over 32 million copies worldwide. Paired with her previous success, Falling into You made Dion a permanent fixture on the radio and the charts, and firmly secured her place among the top ranks of pop divas.

Not everyone loved it: despite the adulation it received, the album was dismissed as kitsch by some critics who didn’t care for Dion’s unabashed sentimentality. Personal opinions aside, however, Dion’s was undeniably one of the most defining voices of the era. As music historian David Metzer wrote in his journal article Popular Music, “power ballads are a prominent part of the soundtrack of popular culture,” resonating with listeners for their “expressive formula that combines the euphoric uplift created by rousing music with sentimental themes.” Having been popularized in the seventies, Metzer observed, the song format has been carried by various artists through the decades: Barry Manilow in the’70s and Guns N’ Roses in the ’80s, for example. Dion, especially with Falling into You, helped usher power ballads into the ’90s. And her influence set the stage for the next generation of big vocalists such as Adele, Jennifer Hudson, Lady Gaga, and Ariana Grande.

More than two decades later, Falling into You remains deeply embedded in pop culture. Grande, a lifelong Dion fan and known for her spot-on impression of the singer, did an “It’s All Coming Back to Me Now” bit on The Late Late Show with James Corden’s Carpool Karaoke. Dion appeared on Carpool Karaoke herself in 2019 and delivered a couple of Falling into You favourites with hysterical abandon. Episodes of Glee featured “Because You Loved Me” and “It’s All Coming Back to Me Now.” On The Voice, John Holiday performed an unbelievable rendition of “All by Myself,” hitting that famous high note.

In an interview with Andy Cohen, Dion was asked how she reached the note. The story, Dion recited, went like this: Foster was putting production together for the track and called Dion to see what key to go for. When it came time to record in the studio, Foster had a surprise—at the song’s bridge, Dion’s modulation would go up a key and a half higher than they agreed. “David! How could you do that?” Dion implored. “Well,” Foster shrugged, “if you can’t do it, there’s other singers next door that can.”

Dion turned to the camera with a smirk, her eyes sparkling again. “And that’s all I needed to hit the note.” The rest is pop music history.