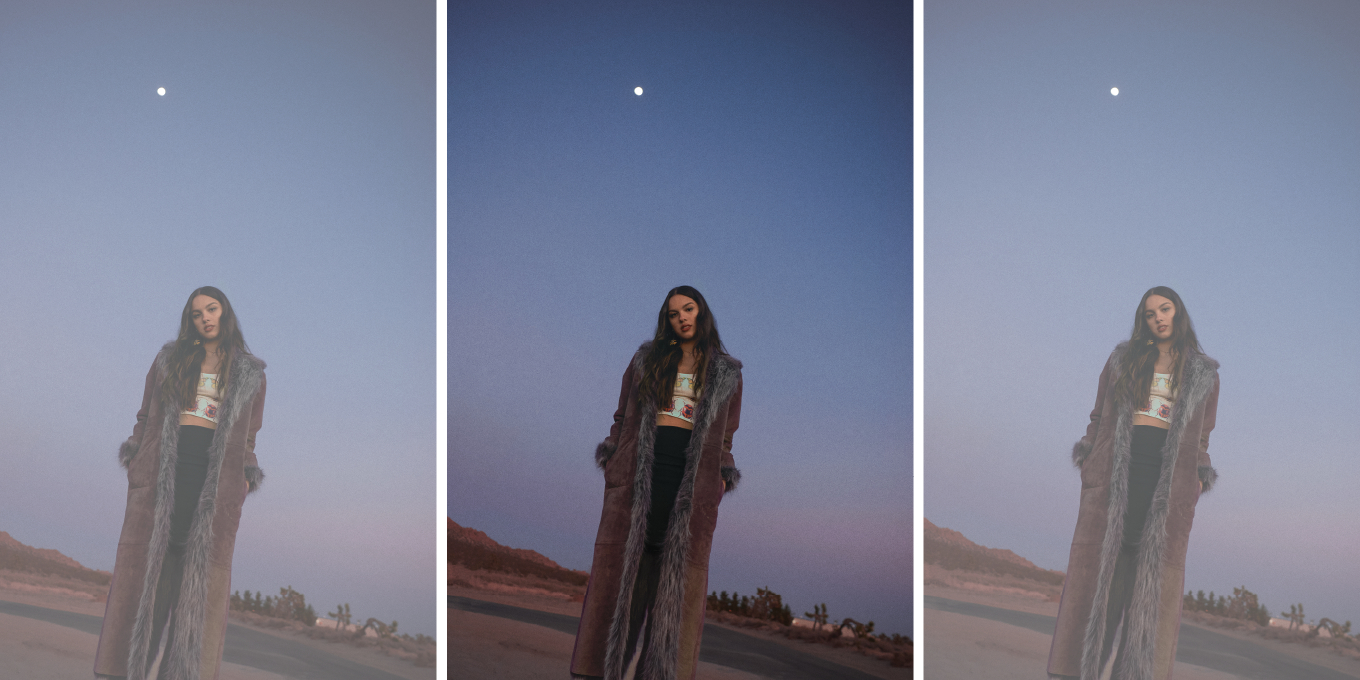 here’s a moment in Olivia Rodrigo’s new film, Olivia Rodrigo: Driving Home 2 U, where, in footage from the final stages of making her debut album Sour, she says, “Hopefully I won’t be so sad on the next record.” She’s semi-joking to her songwriting partner and producer Dan Nigro in the studio as she leans on the couch, but is acutely self-aware of the heartbreak, angst, and pain she’s channelled into the songs they’ve written together. “Oh gosh,” Rodrigo laughs when I bring up the line in a recent Zoom interview. But does she think her words hold some truth?

“Oh yeah,” she adds, glowing in a fuchsia cut-out top. “I’m definitely not as sad as I was when I wrote Sour. I’m so excited to make my next record and explore more colors and textures and feelings and grow as a human being even more. I’m really stoked for that.”

But right now, she’s in the wake of releasing Driving Home 2 U on Disney+, which includes personal footage, revealing interviews, and live performances across the country, and revisits the difficult time when she wrote the album. Namely, as she describes in the film, “the heartbreak that kept on giving,” which inspired a lot of the music. Though she doesn’t mention her ex’s name, she’s not afraid to get into other details, like how she was crying in the parking lot when she was writing and how she “felt like my world was ending every day.” She says she didn’t want to release “Deja Vu” as her follow-up single to “Drivers License” because she didn’t love the song and was hesitant to create a competitive, love-triangle narrative between her and another girl. She says “Favorite Crime” was about forgiving herself and that “heartbreak is a two-way street,” seemingly accepting responsibility for the split, too.

In Driving Home 2 U, Rodrigo says it was hard to listen to some of her songs after making them because she had written them from a place of devastation. But over a year later, that’s not really the case anymore.

“I have a little distance from them now,” Rodrigo tells ELLE.com. “I actually just feel so proud of them and it’s so much fun to sing them now. And I’m just so excited to sing them on tour and hopefully people will sing them back. And I just think when you put them out into the world and they help people and make people happy … it’s not quite as devastating anymore. And it’s a very empowering thing.”

Even though Sour came from a vulnerable place (or perhaps because of it) people did enjoy it. A lot. The album debuted at number one when it dropped last May and earned Rodrigo seven Grammy nominations, and that was all after its lead single, the breakup anthem “Drivers License,” went viral. In a time when Sad Girl music is very much part of the zeitgeist, Rodrigo’s heart-wrenching compositions⁠—whether in ballad or punk-rock form⁠—have resonated. When I mention I’m a fan of the so-called genre, she nods in agreement, “Me too.” Phoebe Bridgers is her personal favourite. “I love her so much and I hung out with her a little at the Women in Music Billboard event. … And she’s just the coolest person in the world and her music’s so great.” 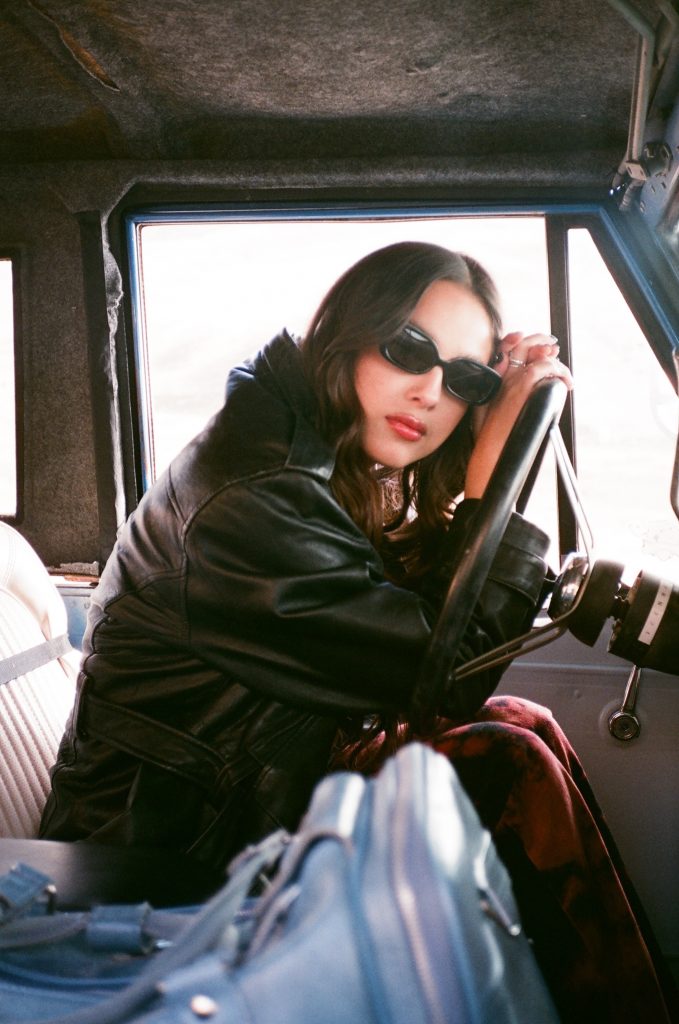 Sour isn’t only about heartbreak, though. The track “Jealousy, Jealousy” captures those feelings of anxiety triggered by social media, and “Hope Ur Ok” is an uplifting message to queer kids. “Brutal” is an aptly pop-punk response to the frustrations about the public frenzy surrounding her life and her music, the loneliness she experienced, insecurities about her image and her craft, and just being a teenager. “That period of my life was very strange, and I remember feeling lonely and I remember wanting a boyfriend really bad,” she says in the film of her headspace at the time. “That was during a time when I looked through what people said about me online or in print.”

The line “‘Cause who am I, if not exploited?” came out of those emotions. In the film, Rodrigo recalls how excited and proud she was when she wrote it. (With good reason: It’s an impressive callout to the media and public obsession around her personal life, and a pleasantly surprising rhyme for “disappointed.”)

“My gosh, it’s so funny,” Rodrigo says in our interview. “I look back at it and I was like, ‘Wow, I was so angsty.’” She later adds, “I guess I was just coming to terms with being like a really young person in the industry and feeling weird about it. But I don’t think I feel that way anymore, which is nice.”

It’s fascinating to watch the behind-the-scenes footage of “Brutal” coming together: Weeks before Rodrigo’s deadline to turn the album in, she decides she wants to add another more upbeat song in the mix. Nigro starts playing around with a rock chord progression that piques Rodrigo’s interest. She starts forming a melody over the chords, in gibberish at first. “It kind of just really came naturally and I think it was meant to be,” she recalls.

When she performs the song in the film, it’s with her all-women band and in the bones of an abandoned airplane in a Mojave Desert airport. They go hard. There’s so much attitude, it’s basically oozing from the screen. It helps that Rodrigo is accompanied by guitarist Towa Bird and bassist Bleu de Tiger, two musicians who gained popularity on TikTok. Rodrigo admits she discovered them on the app. “Look at TikTok bringing people together,” she quips. It’s a fitting, very Gen Z move. As for what’s on Rodrigo’s For You Page right now? “I’m on like the spiritual TikTok where it’s like, girls who are reading your tarot cards for you. And they’re like, ‘Just take it if it resonates.’ And they’re never really right, but I still like to listen through all of them and I love that,” she says. “It’s that and it’s also videos that have no likes and it’s just someone making a dance in their bedroom in like, Tennessee.”

There are many revelations in Driving Home 2 U, but mainly, it serves as a reminder of Rodrigo’s sheer talent. You see it in the recordings of her writing songs and singing them in private, to performing them with creative new arrangements for the film. Her voice holds power on both the belts and the soft notes. Her lyrics evoke so much with few words. She believes two core tenets of songwriting should be “specificity and authenticity.” “Good 4 U” is backed by a string orchestra in the desert; “Favorite Crime” echoes in the walls of a canyon; she does “Traitor” on a loop pedal at a gas station as she plays all the instruments.

“I really wanted to make this film for my fans, especially my fans who maybe couldn’t see me on tour,” Rodrigo says. “And so I thought it’d be really cool if they got to see new arrangements of the songs, kind of as if it’s a whole new concert. So I had a lot of fun playing with different sonics and different ways that you could kind of position these songs that I’ve kind of gotten comfortable with over this past year. … It was kind of like stretching a new creative muscle.”

We even get a glimpse of an unreleased song before the credits roll. “I was kind of listening back to all of the songs when we were making the film,” she says. “And I remember writing that one and thinking that it was good, but it didn’t make the album. And so it’s actually just like a little voice note on my phone, me recording it for the first time, and we put it in the credits.”

She doesn’t think she’ll be releasing it officially, though. “I think it’s just a little voice memo for the film, which I think is maybe cooler.” 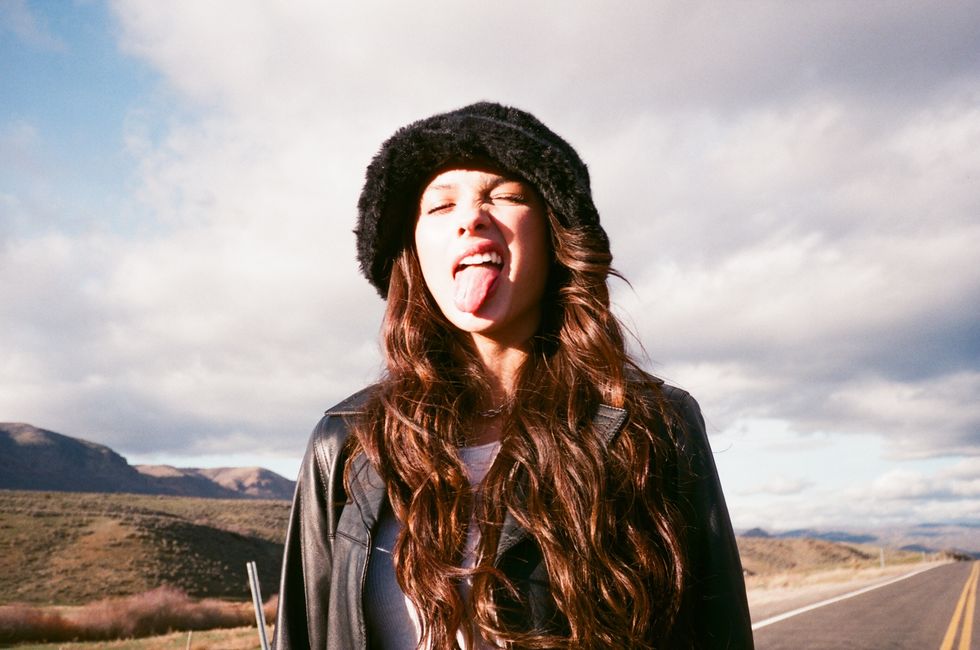 While the rest of us are impressed by Rodrigo’s talents, she’s hard on herself. In the film, she also discusses how her background as a child star, constantly receiving positive affirmations, made her feel disillusioned. (She was just 13 when she led her first Disney show.) She was inclined to believe that if she wasn’t showered with praise, she was doing something wrong; thus she became her own harshest critic.

“I definitely put a lot of pressure on myself all the time,” Rodrigo explains. “There were bits of that in the film where I talked about how I was like, ‘Oh, I don’t like this song. It can be better.’ And sometimes that can be hard. … I’m way too hard on myself and it’s past the point of being productive.” She’s working on that, though.

“But I don’t know,” she continues. “I guess I just try to think of it in a positive way and try to channel it to make myself a better person and not self-destruct, I suppose.”

Earlier, while discussing how music doesn’t have to always come from a devastated place, Rodrigo cites one of her favorite books, Big Magic by Elizabeth Gilbert. “It’s so good,” she gushes. “And she has this whole chapter about how the starving artist complex is like, stupid, essentially. And how, if you’re a fulfilled, happy person, your art can only be more whole and better received. So I like to subscribe to that mindset.”

Stream Driving Home 2 U on Disney+.