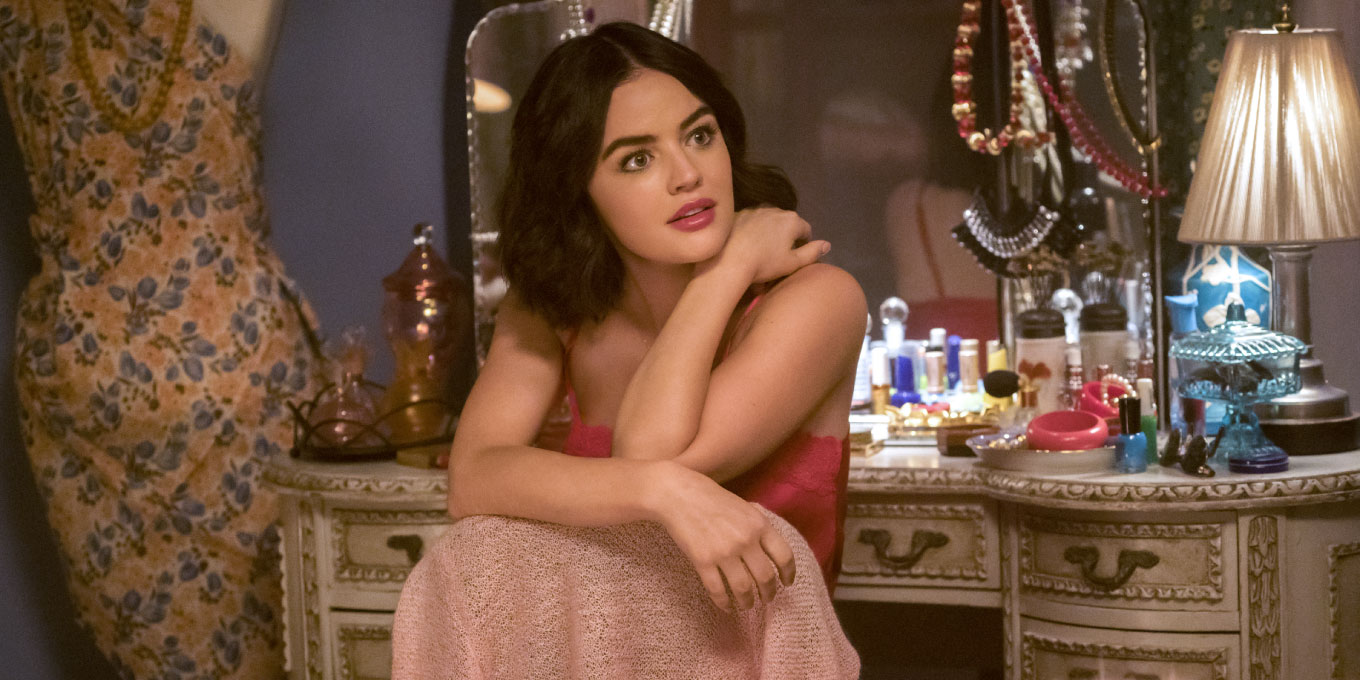 When you spent the better part of a decade on a twisty teen drama that inspired total fan frenzy, as Lucy Hale did on Pretty Little Liars, it may be difficult to top that experience. But with Riverdale spinoff Katy Keene there may be a chance to equal it. “[Katy Keene] feels like a world that I could potentially live in for a really long time,” the 30-year-old reveals to us by phone from Los Angeles. “We finished filming season one a couple of weeks ago, and it really is one of the highlights of my career.”

In the new series (which airs on W Network on Thursday nights), Hale stars as the titular Katy, a bright-eyed, optimistic, aspiring fashion designer who works at a famed New York City department store. The Riverdale connection? Set five years ahead of the edgy Archie Comics adaptation, the first episode sees Josie McCoy (of Josie and the Pussycats fame) moving in with Katy on the recommendation of one Veronica Lodge.

But don’t be mistaken: Katy Keene is certainly not another Riverdale. Instead, think of it (and Hale’s Katy) as the teen drama’s bubblier, more inviting cousin that feels like an old friend, even just minutes after your first meeting.

How did you first get involved with Katy Keene?

I was very familiar with Riverdale and Archie Comics and when I went to meet with the creators of the show, I [found out] I was the person on their vision board to be Katy. Then I read the script and fell in love with it. There’s so much heart to it, and Katy reminds me a lot of myself – we’re both passionate and have the drive to go after what we want. And I thought it was really different from anything else on TV right now. It felt like a no-brainer.

One of the things that feels different about the show is how optimistic it is. Why was this something you wanted to take on at this point in your career?

I’ve done really dark shows and I wanted to, from an artistic standpoint, try something a little different. Katy Keene is something for people to feel inspired by. What we see on TV can have a direct impact on the decisions we make. I wish Katy Keene was a show I had when I was younger. I can’t remember having anything like this. It’s a joy to be a part of, and hopefully, people feel the same.

You mentioned seeing yourself in Katy. In what ways do you relate to her?

I moved to L.A. from Memphis when I was 15, and the drive Katy has for designing is what I had for performing. And, of course, there’s the struggle of going after that. Everyone can relate to having some sort of dream. Katy has a fire, and I still have that. And she has the foundation of her core group of friends, which is super rare and important.

Where does your drive come from?

My mom asks me that every day. [Laughs] I’m sort of the black sheep of my family. Nobody’s in entertainment. But I was raised by a single mother who worked nights to support my sister and me. I definitely get my work ethic from her. And I do genuinely feel like when you like what you do, it doesn’t feel like work. [I’m] excited to get up for work and to learn.

Katy is an aspiring designer. How do you use style to develop a character?

I’ve been really lucky with the characters I play. They’ve had a strong sense of who they are, and what you put on every day is a direct reflection of who you are and how you’re feeling. I became Katy the second I did my first fitting, because I understood her on a way deeper level. She only wears pinks and reds and hearts and glitter. That is who she is, but sometimes she hides behind her wardrobe – she’ll try to appear happy when she’s dealing with other stuff. And you’ll notice if she’s feeling sad or things aren’t going her way, she’ll wear shades of blue. Our costume designer is very smart.

In your recent Cosmo profile, you talked about not having to audition for teenaged roles anymore. What are you hoping to do now that you’re past that point?

I just want to try new things. I never want to do the same thing twice, and I want to keep challenging myself. I lived in New York for Katy Keene, and that made me fall in love with Broadway. That is the ultimate challenge for a performer – doing it all live, multiple times a week. I’m a perfectionist, so it’d be really hard to let things go, but I think it’d be good for me. That’s a long-term goal for me.

You’ve also talked about not caring about certain things anymore now that you’re 30. What have you stopped caring about?

I used to care so much about what other people thought of me. With my job, you have to care a little bit, but it used to control my life. I would obsess over it. I’d read a comment and it would completely ruin my day. As I’ve gotten older, I’ve set boundaries and have tried no to live my life for other people. I try to live it for myself, whether that be with the characters I take on or what I say or do. When you get to a certain age, your priorities shift. You realize that you’re young and this may be the best you’ll ever look, so might as well enjoy it. I appreciate the small things more.

My last day of filming season 1 just happens to be premiere day. I’ll try and keep this short & sweet. Copious amounts of love, energy, hours, and red lipstick went into Katy Keene 💄this show, this city, these people, and this character have filled my life with an unbelievable amount of joy. The gratitude I have is through the roof. Thank you to the cast, crew, writers, producers and all the hardworking people that have made this possible. TUNE IN tonight only on @thecw and stream for free tomorrow on the CW app. Thank you all for the support. Katy and the gang can’t wait to meet you 🍒♥️

In last week’s episode, Katy broke up with her long-term boyfriend, KO. What can fans expect for the rest of the season?

You get to experience Katy single in the city, which is very fun because she hasn’t been single in a long time. She meets people, gets a really great job opportunity and a potential love interest. What I love about this season is that things don’t go Katy’s way most of the time, and that’s realistic. We get to see her fall and learn and grow. So often you’ll see a woman at the end of a show needing to be with a man, and we don’t push that on Katy. Her dreams come first.

I know we can expect some cameos, but would be your dream Riverdale guest appearance on the show?

There are so many great characters. It would be cool to have Archie on the show. He’s a boxer, KO is a boxer. They could battle it out.

What the Cast of Cheer Are Up to Now