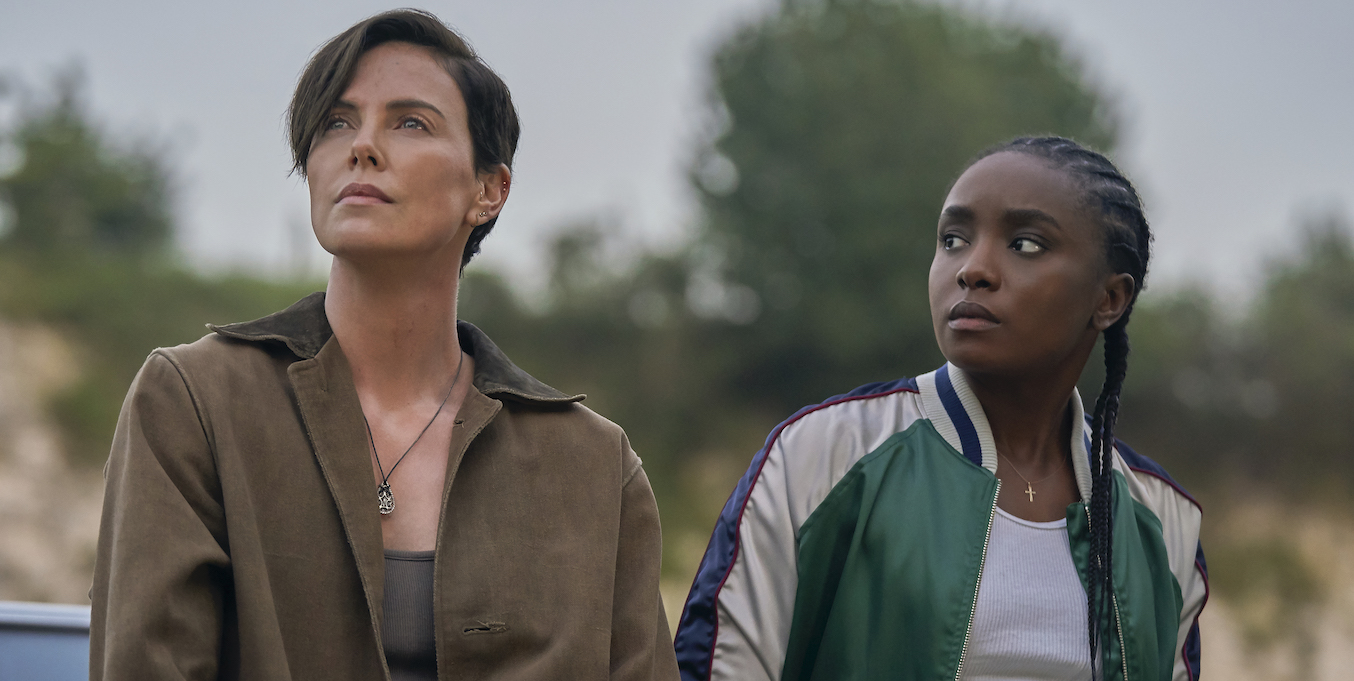 Like many of us, KiKi Layne has spent the last few months inside living in her most comfortable outfit: a T-shirt and a pair of leggings. But now that she’s on a whirlwind press tour for her new movie, The Old Guard, the fashion lover has relished the opportunity to get dressed up for something again. “I was like, ‘Yes, girl! You haven’t looked this cute in months!” the 28-year-old says, her infectious laugh echoing out through the phone. “I’m not extra, I’m not going to be the person walking around the house in an extravagant gown during quarantine. But I’ve definitely been doing all these Zoom interviews wearing my Dior and these Netflix flip-flops I got from their Golden Globes after-party.”

Layne’s Hollywood breakout came with Barry Jenkins’ intimate and moving 2018 drama If Beale Street Could Talk – her first-ever movie role. She followed that up with Native Son, another quiet literary adaptation. The Old Guard, which starts streaming on Netflix on July 10, is wildly unlike anything else in Layne’s filmography.

Directed by Gina Prince-Bythewood (Love & Basketball, Beyond the Lights), the comic-book adaptation follows a group of centuries-old (sort of) immortal mercenaries led by Charlize Theron. (“Bruh, I am in a whole ass action movie with @charlizeafrica directed by @gpbmadeit,” Layne wrote on IG when the first images from the film were released. “Wow. God really out here making my dreams come true, y’all.”) Layne stars as Nile, a soldier who has newly become immortal and joins the group to help their secret from being exposed. We caught up with the Cincinnati, Ohio, native to chat about the movie, working with Theron and her obsession with tarot.

Why The Old Guard?

The very first thing that got me interested in this project was the opportunity to work with Gina [Prince-Bythewood]. Then I learned that Charlize was in the cast. I was like, “Oh my goodness, this is even better.” And once I actually read the graphic novel, I thought it was dope. It was cool to see these characters with these extraordinary abilities, but, at the same time, they’re still very human. It’s a very rich world to explore.

And what about your character, Nile, specifically appealed to you?

For one, it was just the opportunity to be in this type of role that doesn’t really come around often for Black actresses. It’s a role that’s so kick-ass and it has so much integrity. I loved the opportunity to show all of these different colours behind such a complex Black character. It’s [rare] to explore all of the dynamics that are a part of our human experience. It as exciting to explore these complexities and the conflict that Nile struggles with throughout the film. And, you know, there was an opportunity to whip some ass alongside Charlize Theron. Can’t be mad at that.

It’s pretty exciting that you get to do your first action movies alongside one of the greatest action heroes of our time.

I couldn’t have asked for a better introduction to the genre. What Charlize has represented for women in this genre is amazing. I’m very grateful to have done this alongside her and to have been able to learn just from watching her. She has a wealth of knowledge and this level of commitment to telling the story in the best way and being fully committed to the physicality of it all. It’s truly amazing to be on set with her.

Did she have advice for you going into your first action movie?

The very first thing we shot for this film was a fight scene between me and her on an airplane. I had already come to the table with a strong work ethic, but then immediately seeing her work ethic and how she was telling the story physically felt very different for me. I’m grateful I got thrown into a very physical part of the story because it’s such an essential part to get right. She also reminded me to relax sometimes, to trust the training. We started training months in advance, and sometimes she would come find be and be like, “Girl, relax. You know the choreography. You’ve got this. You’re a great actor.” She reminded me that it was just an extension of my acting. And she also gave me tips on how to nurse my bumps and bruises. [Laughs] You know, what ointments to buy.

And you’ve already mentioned that working with Gina, who’s a legend in her own right, was a big draw for you. What was that experience like?

I was just so excited. After I left the [initial] meeting, I immediately ordered the graphic novel and called me team up, telling them, “Yo, Gina’s directing this movie!” What she’s done in terms of telling stories with Black people and Black women at the centre of them…I just appreciate that so damn much. I was happy to work with her and also share this entry into the action genre with her because this is her first time directing an action movie too. I’m sure on day one, both of us were kind of looking around like, “Ah, shit. What did we sign up for?” [Laughs] We were able to lean on each other.

@oldguardmovie on Netflix, July 10 . . There was one night when I was promoting If Beale Street Could Talk and I was super exhausted. Press had been going non-stop and I was so worn out that I started to doubt whether or not I could actually handle all of this. Just as I was walking out the door of the last event I could manage that evening, a woman came up to me and told me how much Beale Street meant to her. She said it was the first time that she saw someone that looked like her — a dark skin woman rocking her natural hair — being treated with so much love, beauty, respect and care on the big screen. That exchange will always stick with me because, as tired as I was, I knew in that moment the Universe was reminding me that this is all so much bigger than me. And that I was right where I was supposed to be. I know I haven’t really been on IG recently (although we all know I don’t be on here like that period), but please know that even when I am not present on social media, I am always fighting to be present in rooms, spaces, conversations, and roles that Black women, especially dark skinned Black women, have historically been left out of. Trying to bust through doors and walls in these industries in a way that they wouldn’t be able to put the wall back up even if they tried. Because there’s no point in making it through the door, if you’re not gonna make sure it stays open for more of us to follow. I’ve been committed to attacking the industry and my life in this way since I was writing my college application essays. And I will always try my best to honor the fact that no matter where I go in this industry and my other ventures, my big break was through the words of James Baldwin, followed by the words of Richard Wright. That is not lost on me. I am always thinking of, supporting and fighting for my people. So yea, here I am. Little Black girl from Cincinnati, OH out here being a whole ass action movie star and shit. 😁😁😁 And shout out to the fact that that’s my real Mama and one of my actual brothers on the phone. Also, all the Chicago homies know I was too hype that my character was from Chicago 😂 🖤🖤🖤 #TheOldGuard #StrongBlackLead

Viewers will, of course, know you from smaller, more intimate dramas like If Beale Street Could Talk. How did roles like that prepare you for a bigger movie like The Old Guard?

They helped to keep me grounded. It was wonderful because when I first got to talk to Gina about this movie she made it very clear that she really wanted to explore the heart and the depth of these characters, you know, why they make the decisions that they make, what they struggle with. I knew I could do that for her because of work in If Beale Street Could Talk and Native Son and even my prior experiences in theatre. It was great to know that, in this huge action movie, there was space being made for more intimate drama.

That’s my whole mission. I remember growing up and feeling like I didn’t really see much of myself represented. Or if I did, there were only a few types of roles that had authority. I don’t want to be put into a box. And that’s why I’m grateful that, this early in my career, I’ve done these special dramas and now a huge action film. And later this year, I have Coming to America. I’m excited to be on this path saying, “Don’t put me or other actresses who look like me in a box.” We all live in different worlds and situations, so what’s the issue with representing that on screen? And I hope I can make other Black actresses feel encouraged and empowered to not accept, you know, that tiny ass box of roles we grew up being told that this is where we belong. I want Black girls to not accept that shit.

Back when you were doing press for If Beale Street Could Talk, I read that you were learning how to do tarot. Have you kept up with it?

Oh, yeah. What’s interesting is that I’ve been doing it with a new deck now, so I’m trying to understand these new cards and what energy they are representative of. It’s been kind of cool. I like doing it because it makes me more intentional about what energy I’m putting out and what energy I am receiving. As crazy as all of this is, I was going non-stop in 2019. So, for all of us, the pandemic has forced us to sit still. I had to get really honest about what had happened [last year] and how that affected my energy. So I’ve been using tarot to gain a better awareness of that and how to protect it.

Watch the New Trailer for the Kissing Booth 2

Alisha Boe on Saying Goodbye to 13 Reasons Why