We talk to the actress about her breakout leading role in Barry Jenkins’ latest film, If Beale Street Could Talk. 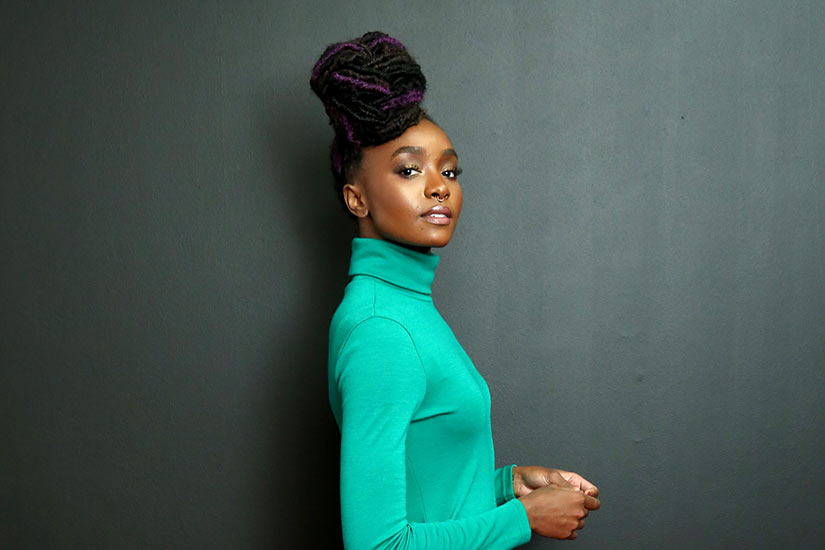 Not that you can tell. Layne shines as Tish, who is fighting to clear the name of her fiancé, Fonny [Toronto’s own Stephan James] while pregnant with their child in New York City in the 1970s. Regina King is Tish’s mother, who, along with both of their families, works to confront the systemic racism that has led to Fonny’s incarceration for a crime he did not commit.

Aside from this being Layne’s first big role, the experience felt even more surreal when members of Baldwin’s family visited the set, she told us ahead of the film’s world premiere at the Toronto International Film Festival in September. “It was [really] something to hear in the room that they were happy and feeling good about what we were doing,” she said.

Although Layne’s rise in Hollywood may seem sudden, this moment has been years in the making. She enrolled in performing arts school at the age of eight, then continued to study acting at college in Chicago. Afterwards, she spent three years working in the city’s theatre community.

Now with a major award-season contender under her belt — the film was nominated for three Golden Globes and five Critics’ Choice Awards and will no doubt get some Oscar nods— she’s not stopping. Her upcoming projects include roles in sci-fi thriller Captive State co-starring Madeline Brewer [The Handmaid’s Tale], and another dramatic adaptation, Native Son, based on Richard Wright’s coming-of-age novel set in Chicago’s South Side in the 1930s. We caught up with Layne to talk about the film and the importance of embracing your own journey.

What does it mean for you to be involved in the film?

It means so much to be a part of bringing James Baldwin’s words to life. Also working with Barry in addition to that — I recognize that it’s definitely an honour.

What do you hope audiences will take away from the film?

This is a really beautiful love story, and it speaks to the kind of love you have with a spouse, with parents, with siblings, with best friends. I hope audiences take away the importance of pressing into that when you’re dealing with any type of difficult situation or adversity. I’m naturally a person who pulls away. I think that this film teaches you that it doesn’t make you weak to have to lean on somebody — if anything it speaks to the strength of whatever love you have with the people around you.

Who would you love to collaborate with?

What advice do you have for other young actors?

Don’t be afraid of the work. This moment means so much more to me because I put so much work into getting here. Everything you’re getting, whatever time it’s taking you to get it, that’s okay. Don’t try to rush your own journey based off of what you see happening for other people. You’re only going to hurt yourself because you’re either going to find yourself in a position that you weren’t really ready to be in or you’re just going to constantly be ungrateful for where you are.

I’m learning so much about my style just having access to so many things now. Growing up in Cincinnati, we really didn’t have much money so it was really about places where you can go to get the most for the least. There was a long time where I didn’t mess with patterns because it’s hard to mix and match them. I’ve determined my style — I like to call it elegant funk. You’ll see me in some really beautiful gowns but I’ll still have my septum piercing in.

What is your go-to beauty routine?

It’s making sure I get all that makeup off. I grew up with really bad acne. I still use all of my acne medication so I try to be mindful about what I put on my face. I think a lot of times for women, especially in this industry, we’re forced to do things for beauty that aren’t good for what we already have.

If you have any downtime, what do you like to do?

I’ve been reading again a lot, binge-watching stuff on Netflix [Jane the Virgin and Luke Cage] and catching up with my family. There are so many things [happening] now so just being able to sit and talk to my brothers, catch up on what my nieces and nephews are doing or just sit in a corner and read a book, I get to be at peace — a bubble of myself.