Plus, the writer-director talks about the bond between JLo and Constance Wu. 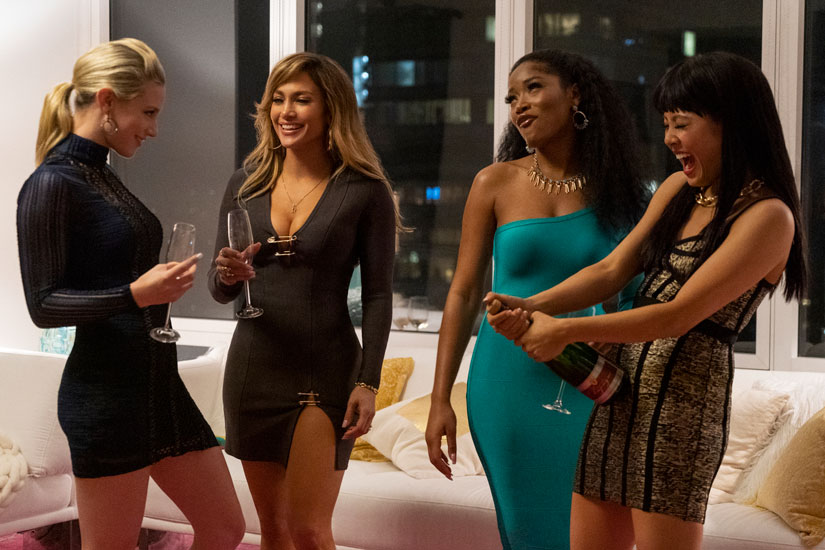 “I never thought I’d be nostalgic for 2007,” Hustlers writer-director Lorene Scafaria says, breaking out into laughter. Neither did we – and yet we couldn’t help but fondly recall the time when Juicy Couture tracksuits were ubiquitous and Rihanna and Jay-Z’s “Umbrella” was on repeat while watching the crime drama, which hits theatres today. That’s because, outside of putting together an impressive ensemble including Jennifer Lopez, Constance Wu and Cardi B, a big part of what Scafaria had to do was recreate the year leading up the 2008 financial crisis. She did it perfectly. The result is Hustlers (based on a 2015 New York Magazine article), an entertaining and insightful look into the lives of strippers who team up to steal money from their rich Wall Street clients.

Though it was one of the most popular and well-received films to debut at this year’s Toronto International Film Festival, Hustlers almost never came to be. In fact, Scafaria had to fight just to get it made. “I wrote the script even though I knew it wasn’t my directing job to start – I wrote it to try and get myself into the director’s chair,” she tells us during a round-table conversation at TIFF. “It took a long time to convince people. It wasn’t just getting the director job, it was proving to other people that this was a story worth telling. And it felt like every headline in the news was only making [this story] more relevant and more urgent.”

Here, the director tells us about making the movie and finding the perfect cast.

On making a movie about strippers for women

“There are so few movies that tell it from their point of view. Even when they are from their perspective, they’re not told with the same humanity and empathy. I was really excited to walk in their shoes and see what they experience on a daily basis.”

On putting together an all-star cast

“It was a lot easier once Jennifer Lopez was attached. [Laughs] The miracle was probably scheduling all of these people who have incredible busy lives. Lizzo, Cardi, those are roles I wrote for them. I pulled all of these people in who I really wanted to see in a locker room together. I just kind of can’t believe it worked out.”

On the on-screen bond between JLo and Constance Wu

“I met them separately, so I could only imagine them together until the camera test. When I saw Jennifer put her arm around Constance for the first time, I got chills. I was so excited to see the two of them together. Their chemistry was really remarkable.”

On striking the right tone for the movie

“I wanted to tell a fuller story before it turned into a crime drama. Obviously, there’s a point of no return for them. I wasn’t trying to convince anyone that wrong was right or right was wrong. I was interested in seeing what they were up against in their industry and how much of an effect the financial crisis had on them. There’s certainly fun and comedy involved, and there’s other heavier, sadder moments. But at its core, this is a friendship story about these two women who form this bond. It’s also a movie about capitalism and money as it relates to gender and gender as it relates to money. We’re used to seeing women spending and shopping, but we don’t often see them earning and providing.”

On why she fought so hard to get Hustlers made

“As soon as people started to pass a certain amount of judgement on these characters, I became very personally invested in telling their story. Female characters are scrutinized in ways that women in general are scrutinized. We’re supposed to be perfect, we’re not supposed to make mistakes, we’re not supposed to get greedy and have that level of ambition. And I felt like people were judging the characters not just for where they ended up, but also for where they started. I grew up with these girls, I grew up with these guys – like, I worked in a boiler room when I was 17 and it was just a room full of phones were guys were selling bad stocks to old people. Some of my friends became strippers after high school to go to college and pay off student loans. I just saw it as a story about people.”