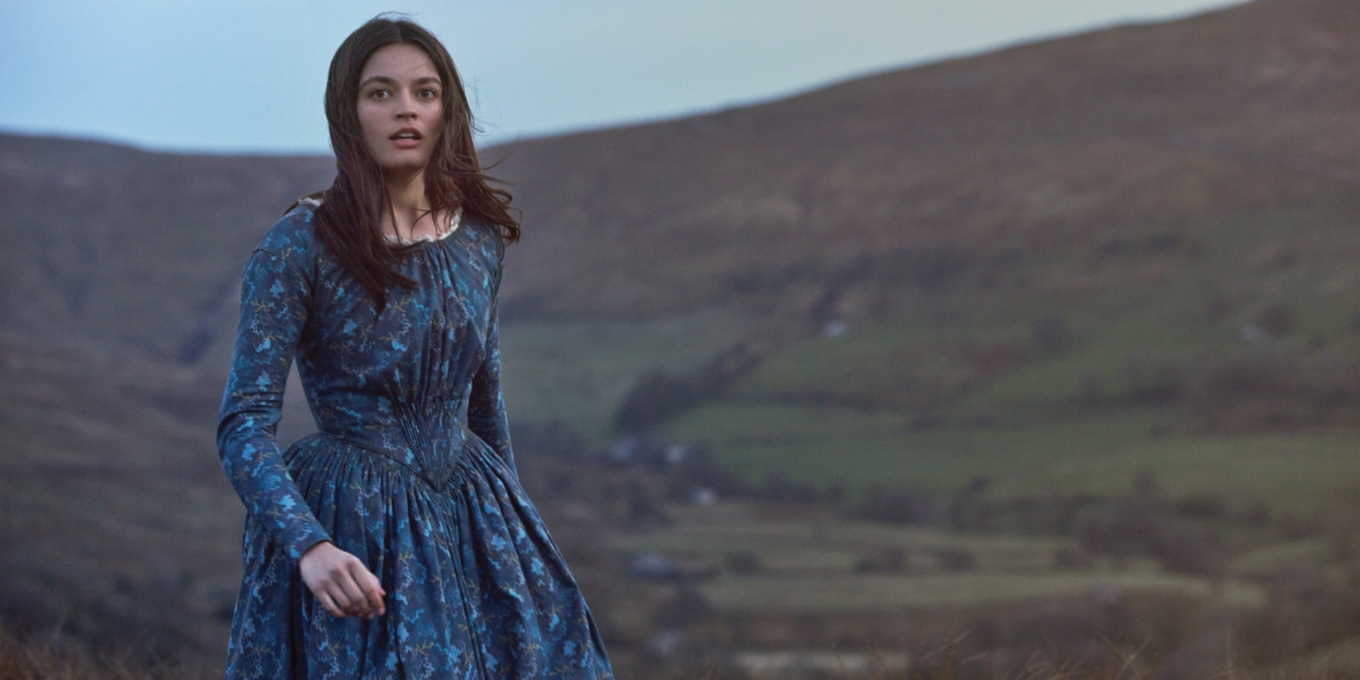 You may recognize Emma Mackey from the cult hit Netflix show Sex Education where she plays the unapologetic and quick-witted Maeve—the role of which earned her a well-deserving British Academy Television Award nomination.

Earlier this year, Mackey starred in the Kenneth Branagh ensemble piece Death on the Nile. Now, the 26-year-old actress takes the reins as the lead in Frances O’Connor’s Emily, which had its world premiere at the Toronto International Film Festival in September.

“I’ve had my Netflix training and I’ve been so lucky to be part of a very diverse, modern cast in a modern story so that started off with a bang,” she shares about her time on Sex Education, which catapulted her into the spotlight.

Emily is not just another costume drama film. This film allows viewers to explore the world through Emily’s eyes. Historically, we’ve seen her through sister Charlotte’s eyes, or through a historian’s eyes—so this change is welcome. Mackey agrees that there’s a shift in the dynamic to make Emily the film’s primary subject.

Sitting in a hotel in Toronto, mere hours after her premiere, Mackey is excited to talk about her film – it also happens to be her first film festival. “This film didn’t feel stuck or precious like a lot of costume dramas feel. Emily Brontë is fascinating and it felt wild to me, as opposed to like, ‘This is going to be like a chronological retelling and everything’s prim and proper.’ It’s a pretty chaotic, messy, dark script. There’s a lot to get your teeth stuck into. I liked that it didn’t feel safe. I went for it.”

For Mackey, once she got her head around the fact that it wasn’t a biopic nor a catalog of Emily Brontë’s life, she was able to process that it’s just about the story. Despite being quite academic, she notes, it took her a little while to untie all those “Cartesian knots.”

This realization allowed Mackey to relinquish the pressure and play the part fully. “ [I] kind of let myself get carried away by the story and just trust Francis’s vision. It means so much to her and it’s such a personal story that I kind of had to just follow that and let that be the foundation of the film,” she explains.

The French-British actress says the strength of the film lies in the fact that you don’t need to be a Brontë fan to watch it.

“I don’t want that…it shouldn’t be reserved for a specific fanbase. I think it’s a film that will speak to a lot of people because it’s about human interaction and creativity and storytelling. The central part of the story is ‘Where do the stories come from, and where does creativity come from?’ Francis’ idea was to reach a sense of true authenticity, and what does it mean to be a young woman in that time, but also nowadays, since we’re not that far off. There are things that have changed, thank God, but it doesn’t feel stuck. It feels like quite a tangible thing. This story doesn’t feel like an old timey piece. I quite liked that. That’s why I wanted to do it.”

The idea that the extremely gifted author was stuck in that time, without a therapist, baffles her. “I just can’t imagine. I mean [in today’s society] a lot of people have anxiety and have therapists, and everyone talks about [mental health] so openly. Imagine if I had the thoughts I have today, in that time, in a house with my entire family in the middle of nowhere in England? I would lose my shit. Imagine what that does being in that contained space.”

Within minutes of talking to Mackey, one can easily see how deeply the actress cared for and thought about the role of Emily.

“I didn’t want her to feel fabricated. I really fought for it and worked hard. It was an intense shoot for six weeks and we had two weeks [of] rehearsal before and it was a really tough time. But I went to the fire for this. I really wanted to give it my all. It was a lot to carry. I’m just fascinated by the quiet observers; I think Emily is the champion of that; she’s the quiet observer in the corner of the room who watches everyone else and absorbs it and takes it all in and thinks about it. I think she uses her fears and her desires and her passions to her brain’s advantage. It’s a muscle that she was in constant use of.” 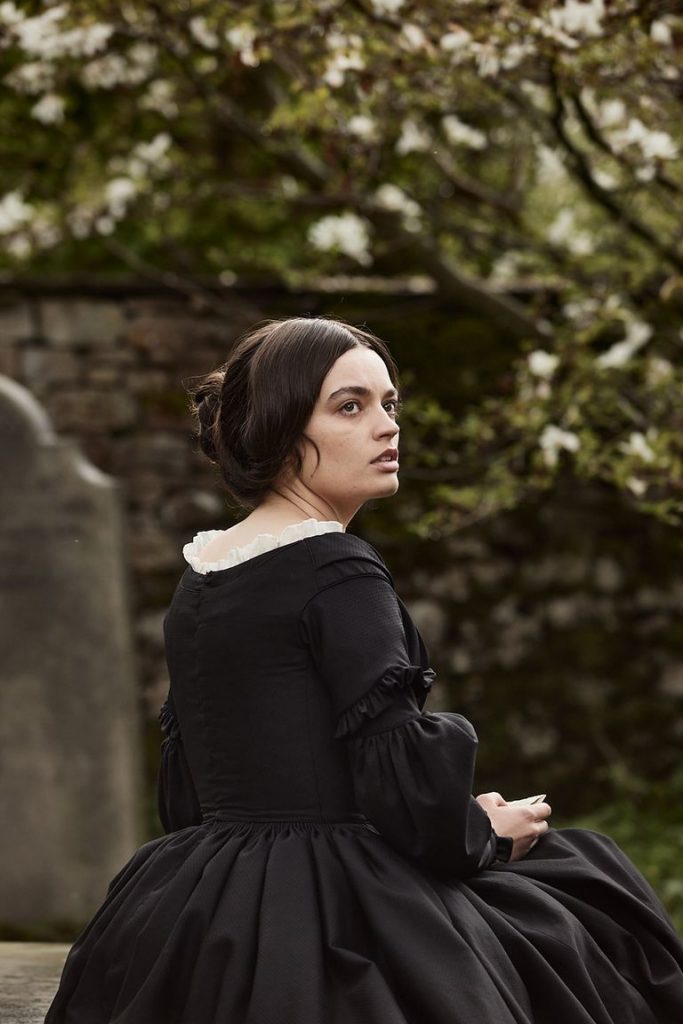 Mackey definitely sees a little bit of herself in Emily Brontë. A self-proclaimed observer like Brontë, Mackey notes that she “doesn’t have [Emily’s] genius. She was a writing genius.”

In fact, Mackey gets deeper into the subject of why she finds Brontë fascinating – she envisions what it must have been like for the author to grow up in a restricted society.

“There’s something fascinating about someone who has a very quiet life, where nothing really happens, and then is able to produce that piece of writing that fascinates people. It’s such a dangerous, fascinating thing to even contemplate when you start thinking about it.”

Mackey seems so invested as she peels back the layers of Brontë, sharing, “How does that happen? How did she get those thoughts? The whole point of the film is where do the stories come from? Why do we stop? Why do we grow up? It’s kind of Peter Pan in a way. Why did we stop all those fibers in us that are so willing to play and those fears and be electric when we’re young and then they go away? This whole film is Emily being repressed by her sisters and by her dad. Not by Branwell, but in other ways, he calls her terrifying and tells her “no one’s ever going to love you because you’re scary.”

Continuing she thought, she notes: “[Emily] is the embodiment of all of those societal things she lived in. Imagine having to hold all of that inside you and not explode! That’s why I think Wuthering Heights is probably an explosion of all of those feelings because the grief was just around them all the time.

Mackey Wants to Do It All

Mackey has a desire to immerse herself in the film industry, and it’s clear there is no stopping her. “I want to just do different genres, I want to work with the directors that I love the most and curate that in my head and know what my taste is truly so that I can go out and work with the best people for me. Hopefully tell those stories that mean something to me.”

Read more:
These Are the Most Anticipated Films at TIFF 2022
Devery Jacobs Is the Leader of the Pack
Kat Graham’s Star Potential