When a high profile wife gets dumped by her superstar hubby, it's time to cash in. 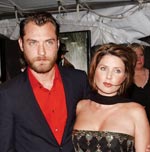 Teri Hatcher and the gals of Wisteria Lane may be TV’s most famous angst-ridden housewives, but their demands and dramas pale in comparison to true-to-life desperate celebrity spouses like Sadie Frost. The U.K. fashion designer is yet another embittered high-profile wife who has been battling it out with her ex,
Jude Law, for a multi-million dollar divorce settlement.

Princess Diana was a pioneer of the disgruntled celebrity-housewife set. After nearly 15 years with Prince Charles, Diana lost the title “Her Royal Highness”but reportedly received between US$22 million and US$27 million, in addition to US$600,000 a year to run her private office. Cindy Silva didn’t have the public profile of a princess, but after her 16-year marriage to Kevin Costner was dissolved in 1994, she became a very wealthy divorcee, reportedly walking away with US$80 million. With settlements like these, it’s no surprise that celebrities try to guard their homes, their cars and all their high-priced toys by keeping assets separate and distinct from their spouses, says Dennis Wasser, a divorce lawyer with a list of superstar clients that has included the likes of Steven Spielberg and Tom Cruise. Film residuals go directly into individual bank accounts; stocks and real estate are kept in the celebrity’s name; and they even specify which wedding gifts belong to whom. Wasser adds that a spouse-to-be of an über-star often has to sign away rights to his or her spouse’s future earnings. This is called the “celebrity goodwill clause,”and the person acknowledges that he or she has no stake in the increase in value of his or her spouse’s career.

In California — a community property state where everything is divided 50-50 if there is no prenup — these kinds of premarital agreements are as common as Botox and palm trees. “Anyone who gets married today without a premarital agreement should see a psychiatrist,”says Raoul Felder, the Manhattan attorney who represented Rudy Giuliani in his highly publicized divorce from Donna Hanover. “Consider it a vaccine to protect against the pain of divorce.”The financial pain, in particular, can be excruciating when millions of dollars stand to be divvied up, says Scott Weston of Nachshin & Weston, the L.A. law firm whose clients include Alana Stewart (Rod’s ex-wife) and Will Smith’s ex, Sheree. “The amount of money stars spend is boggling,”says Weston. “They have yachts, limos and a staff of dozens; they live in 30,000-square-foot homes. I’m dealing in the world of fantasy.”

What the women asked for…and what they got!

Sadie Frost vs. Jude Law
Married Six years.
Kids Three: Rafferty, Iris and Rudy.
She wanted … Frost sought one-third of Law’s future earnings and an approximate US$20-million lump sum payment, plus their US$9-million home. She also requested a monthly allowance of US$36,000 and joint custody of the children. Once divorce proceedings were launched, Law said it was “like being locked in a car and the handbrake suddenly releases and you can’t stop the car rolling into an inevitable crash.”
She got … Frost reportedly received a divorce settlement of US$11 million, including a US$7-million property and US$27,000 a month, plus joint custody of the children.

Melissa Mathison vs. Harrison Ford
Married 20 years.
Kids Two: Malcolm and Georgia.
She wanted … Her petition was not made public.
She got … A reported US$118 million, plus the court ordered Ford to share his royalty earnings from films he made while married, including the Indiana Jones blockbusters, Patriot Games and The Fugitive. Mathison also got a US$15-million lump sum payment, half the value of their estimated US$40-million Wyoming ranch and half of their estimated US$40-million property portfolio. She penned the E.T. screenplay before getting married and got to keep her earnings from that. Ever the romantic, Ford summed up his marriage: “It was just part of the continuum of the relationship. I don’t know if I ever proposed to her.”