China chic: Find out why this metropolis boasts the best fashion labels around! 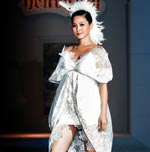 Hong Kong designers are the new high-fashion players in a city known for its shop-’til-you-drop, label-loving style scene!

Dorian Ho
Dorian Ho could have taken over his family’s company and manufactured clothes for global brands like Donna Karan and Calvin Klein, but instead he went on to launch his own collection. His eponymous label, which made its debut five years ago at New York Fashion Week, is now sold at Lane Crawford — Hong Kong’s Holt Renfrew — and Saks in NYC. While some local designers have been criticized for mimicking European designs, Ho argues that the blending of Eastern and Western influences was inevitable given the city’s history: “It’s a harsh reality that designers are criticized for incorporating foreign influences. Yet when Tom Ford took a Chinese cheongsam as the inspiration for his collection, the fashion world welcomed it with open arms.”

Barney Cheng
When couture designer Barney Cheng returned to Hong Kong in the ’90s, he admits there was a scarcity of local brands. “That’s the reason I started my business here,” he says. “I wanted to show the rest of the world that there is life outside of the big brand. Street fashion is burgeoning now. It started with one small, dilapidated building in Tsim Sha Tsui called the Beverly Centre, where the average-sized shop was less than 100 square feet. That was the birthplace for designers like Spy’s Henry Lau, Madame Benji’s Benjamin Lau, Ruby Li, Simone Ng, Silvio Chan and Yandy. The fashion scene is vibrant now.”

Dennis Chan
In 1997, designer Dennis Chan returned to China to rediscover his roots. While touring the famous Dunhuang Caves in the Gobi Desert, he was mesmerized by the
frescoes and sketches on the walls. “It was such a rich cultural history, but then it stopped,” he recalls. “There were no contemporary interpretations of these classic Chinese designs.” When he returned to Hong Kong, his dream was to create Qeelin — the first Chinese luxury jewellery brand. “‘Qi’ and ‘lin’ are Chinese characters that represent male and female, and a ‘qilin’ is a mythical creature that symbolizes balance and harmony,” says Chan. His first collection, Wulu, was an “8”-shaped design based on the ancient gourd believed to ward off evil spirits and bring good luck. In 2004, actress Maggie Cheung wore one
of his Wulu designs to the Cannes Film Festival; it was an instant hit. Chan’s new collection is called Tien Di, meaning “heaven and earth.” “The relationship between the sphere and the square is the perfect balance of yin and yang.”

Photo courtesy of Henry LauHow to shop like a pro!
After a 16-hour flight from Toronto to Hong Kong via Anchorage, Alaska, you’d think a person might want to rest. But this is the city that never stops — shopping. I checked into the Harbour Plaza Hotel and was on the streets 20 minutes later. In this city of 6.9 million, there is a luxury boutique, mega-mall or market stall everywhere you turn. Besides charging no sales tax, the city lures seasoned shopaholics every summer for its annual Shopping Festival. The event is organized by the Hong Kong Tourism Board and runs from June 24 to August 31.

Ready, set, go! Warm up to the shopping scene with a trip to some
of the city’s most popular markets. Ladies Market on Tung Choi Street in Kowloon is the place for everything from cheap fashions to CDs to the latest cellphone gadgets. Temple Street Night Market is a frenetic mix of fortune tellers, food stalls and cheap knock-offs. Stanley Market on Hong Kong Island is a labyrinth of alleyways lined with vendors selling shoes, shawls and factory seconds. If you want a real designer bag at a discounted price, head to one of seven Milan Station stores, which sell gently used luxury bags and accessories with certificates of authenticity. For luxe fashion labels, make your way to one of the city’s mega-malls. The IFC is one of Hong Kong’s newer shopping centres, and it houses more than 200 international brands-from Anne Klein to Valentino — as well as the flagship Lane Crawford.

Designer picks: If you are looking for bargains on boutique labels,
check out the Joyce Warehouse in Aberdeen, advises designer Barney Cheng. “You can rummage through the lost treasures of past seasons,” he says. “My friend found an SS05 Rick Owens orange buffalo-leather jacket, originally priced at $3,500, for $1,050.” In the mood for a major splurge? Go to Edmond Tze Chin’s Etcetera for exclusive, one-off jewellery pieces. “He’s the Asian equivalent of Joel Rosenthal of JAR fame,” says Cheng. “Be prepared to pay an arm and a leg for one of his designs!” Besides his own shops, designer Henry Lau heads to G.O.D. (Goods of Desire). “This shop carries a great selection of cheap and chic household goods,” he explains. “A trip to the Rise Commercial Building in Tsim Sha Tsui is also a must. It’s a funky fashion mall that is full of edgy fashions from young designers.” Another incubator of fashion-forward street styles is the Beverly Centre and Island Beverly Centre in Tsim Sha Tsui and Causeway Bay. “You will find boutiques that carry lines from all over the world,” says Ho. “They’re mostly young and trendy. For Chinese designs with Western elements, there’s Shanghai Tang — but it’s expensive.”

Photo courtesy of QeelinAprés-shopping: Where to go
Happy hour We asked Bruce Dawson, a Hong Kong hipster and editor of Where Hong Kong, for top hot spots to wine and dine when it’s time to put the shopping bags down. Top Deck “It was once the staff’s mah-jong parlour atop the world-famous, ultra-kitschy-cool Jumbo Kingdom in Aberdeen Harbour. Now it’s a stylish indoor and outdoor scene complete with cocktails, a sushi bar and a chill-out lounge.” Blue Bar “This place positively oozes glamour and money, and it’s where million-dollar deals are signed before the next martini arrives. With floor-to-ceiling windows facing the harbour, soft-blue lights overhead and a glowing glass pillar framing the room, it’s all elegance and sophistication.”

Shanghai “Fun and funky, with a hip crowd. The food is upscale Shanghainese. Your best bet is to ask the chef what he recommends that day. The seafood is incredibly fresh.” Cafe Des Artistes “New chef Didier Rochat packs plenty of fresh energy into this classy French institution.” Stauntons “Considered an icon of SoHo, it’s one of the best people-watching spots in Hong Kong. The perfect spot to sip a champagne cocktail.” Stormy Weather “Located in the Lan Kwai Fong entertainment district, this is one of the most popular bars in Hong Kong.”

CONTEST! WIN a trip for two to the Hong Kong Shopping Festival! Click here for full details.Time for pampering Retail therapy can only take you so far. When it’s time for a little grounding, book a session in the Amethyst Crystal Steam Room at the Oriental Spa (www.mandarinoriental.com). At the centre of the treatment room, you’ll see a large healing crystal, which reportedly helps release tension and other aches and pains. At the Spa MTM (www.mtmskincare.com) in the Causeway Bay area, you can try Hong Kong’s first Cromolight Color Therapy treatment system or take a relaxing sake bath in a Japanese-style wooden barrel. The Elemis Day Spa (www.elemisdayspa.com.hk) is located in the heart of Central’s bustling shopping district. Cocoon and chill out in one of the spa’s signature “dry float” seaweed wraps. Our fave? The Exotic Frangipani Body Nourish Float. Mu-Lan Spa is a chic, dimly lit haven amid the fantastically frenetic Tsim Sha Tsui area in Kowloon. The Honey Almond Body Scrub will definitely wash away all your shopping sins.