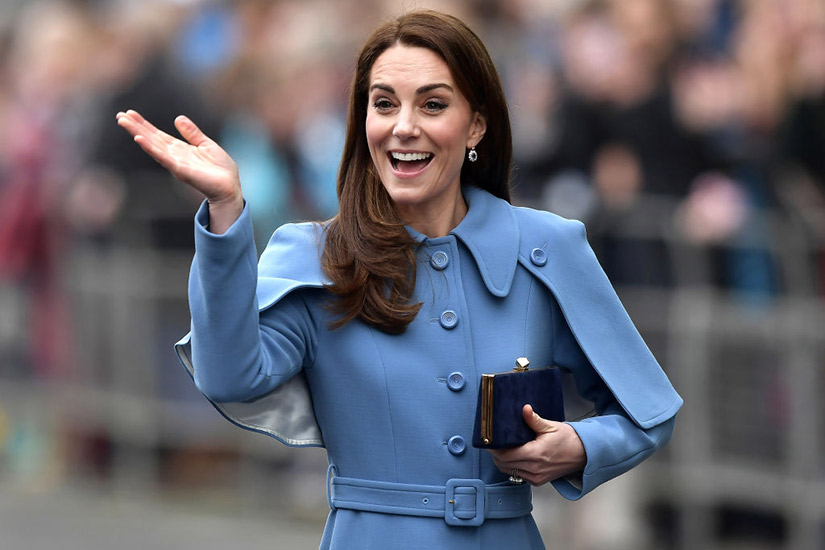 Kate Middleton and Prince William’s two day royal tour of Northern Ireland continues today with a day of engagements in Ballymena. While their first event is private (they met with Police Service officers and staff in Northern Ireland “to hear about the unique challenges they face,” according to Kensington Palace), the first glimpse of what Kate dressed in today has come out. In contrast to her red Carolina Herrera coat dress yesterday, Kate arrived at the Braid Arts Centre wearing a Cinderella-blue coat dress by Mulberry.

Under the coat, she’s wearing a royal blue dress. The first look was tweeted earlier from photos taken at her first private event:

First engagement of their second day in NI, the Duke & Duchess of Cambridge met @ChiefConPSNI, police officers & staff at Hillsborough Castle where they discussed the challenging roles they undertake. @PoliceServiceNI pic.twitter.com/JTgBTETUUw

The Palace detailed their day two itinerary on its site this morning. The Duke and Duchess of Cambridge will be spending the later part of their morning at the Braid Arts Centre. There, they will visit the charity Cinemagic, who have used film, television and digital technologies to engage with over 500,000 young people. The charity uses visual arts to increase opportunities and develop skills for young people from all backgrounds,” the Palace wrote.

Kate and William will end their day at Sure Start, an organization that “supports parents with children aged under four years old living in disadvantaged areas in Northern Ireland,” the Palace wrote. “Their Royal Highnesses will see some of the different programs that Sure Start provides to understand how the organization supports parents and provides best practice for early years work.”

This is Kate and William’s first major overseas tour this year. Yesterday, they did events in Belfast and Fermanagh. The purpose of their engagements is to celebrate the young people in the country, the Palace announced when it shared news of the surprise tour. Their visit comes two days after Meghan Markle and Prince Harry completed their own three-day tour of Morocco.