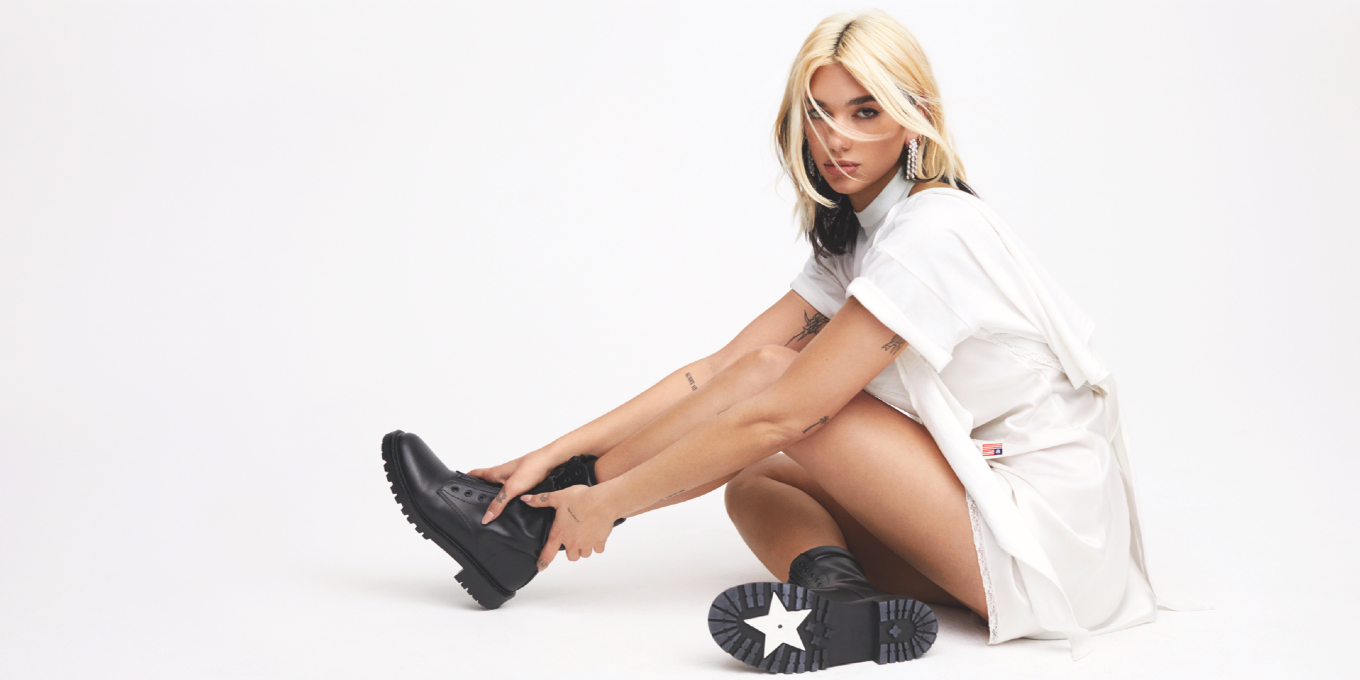 Dua Lipa wants to show me her skylights. They’re not hers, exactly — they belong to the owners of the London Airbnb where she’s self-quarantining with her boyfriend, model Anwar Hadid. It’s actually the second Airbnb the 24-year-old singer has rented since returning from a trip to Australia to find her apartment flooded, but she’s rolling with it. I can hear Hadid’s soft laughter as Lipa tilts her laptop toward the ceiling. When we speak, it’s been four months since the global COVID-19 pandemic began and two weeks since Lipa released her second album, Future Nostalgia. So, naturally, this interview is being conducted via Zoom. The skylights are beautiful.

“London tends to be one of those places where it’s always gloomy and rainy – and that’s not to say that the weather won’t change in a couple of days, but now the trees are fully blossoming and the sky is completely blue,” she says. It’s hard to stay positive when there’s so much suffering, she adds. But the sunshine streaming in from the skylights feels good. “It’s nice to see the earth almost replenishing a little bit,” she says. “Everything’s kind of taking a breather.”

It wasn’t supposed to be this way, of course. By now, almost anyone who pays even the slightest attention to pop culture is familiar with Lipa’s career trajectory – from her days of posting covers to YouTube to a serendipitous meeting with Lana Del Rey’s manager, Ben Mawson, to a 2017 self-titled debut album featuring the catchy breakup tune “New Rules.” Next came the internet nickname “Dula Peep,” courtesy of Wendy Williams, followed by two Grammys in 2019 (for Best New Artist and Best Dance Recording). 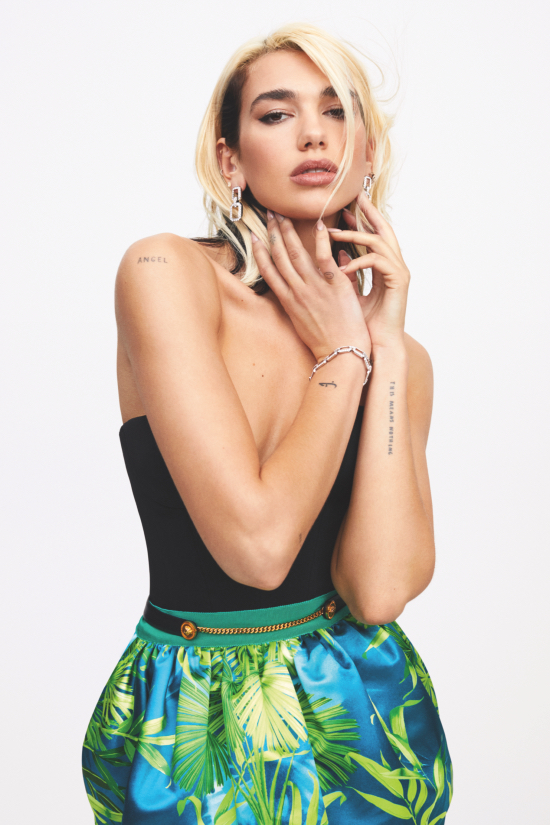 Promoting a big pop album – let alone a high-pressure, highly anticipated sophomore album — remotely in isolation is new territory for any artist and a path few would choose (Haim, Alicia Keys and many others have postponed their upcoming releases due to the coronavirus), but, ultimately, it wasn’t up to her.

The buildup to a planned release in early April had started in earnest last fall with the album’s first single, “Don’t Start Now,” essentially a sequel to “New Rules,” about moving on. Everything was supposed to culminate in a well-timed media blitz—including a Saturday Night Live (SNL) appearance. And then a bot alerted her label, Warner Records, that the album had leaked a week early. Before that moment, she, too, had been weighing a delay. “But I think [the leak] just kind of solidified my choice that I wanted it to be out [in] April anyway,” she says. “This is me going into my celestial beliefs, but it was like, ‘Okay, this is just how it’s meant to be.’ And I am really grateful that the music is out.”

Lipa welled up with tears while sharing the news with fans via Instagram Live, in part due to the general uncertainty of the world at large but also because she still wasn’t sure whether the decision to release the music that Friday instead of some future post-pandemic date was the right one. But she expressed hope that the music might “bring you some joy, especially at a time like this.” In the deep exhale that followed, Lipa seemed to be releasing all the pressure of the past two years—from early anxieties over the dreaded sophomore slump to the even more treacherous terrain of trying to connect with fans from her place of privilege.

“The way I write my music, I’m always very open and I allow myself to be vulnerable,” Lipa tells me on our Zoom chat. “And I feel now, more than ever, that it has brought me closer to my listeners. I think it’s important to talk about your emotions and to be vulnerable and to show that you’re human.”

Lucky for Lipa (and her fans), Future Nostalgia wound up being exactly what the world needed at the exact moment it landed: shimmery disco; old- school hip hop; echoes of pop greats from Madonna to Prince and Britney to Blondie (the title track and “Levitating” both have big Debbie Harry “Rapture” energy). It’s a pastiche of influences, ranging from the music that her parents—ethnic Albanians who fled Kosovo in the early ’90s—played at home in the family’s adopted city of London to the first concerts Lipa attended in her teens: Method Man, Redman and Snoop Dogg. 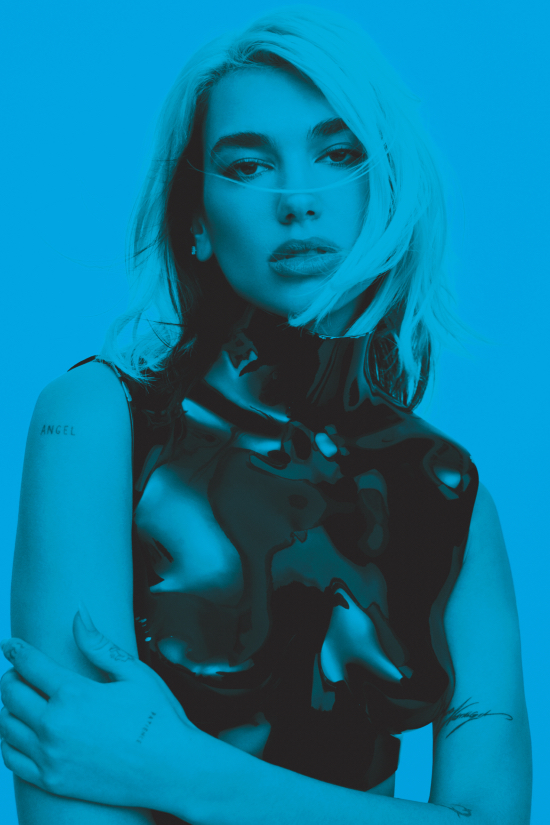 The album also provided a much-needed chuckle (search “‘Don’t Start Now’ meme” for a hilarious repurposing of unintentionally timely lyrics like “Don’t show up, don’t come out”) and plenty of fun in songs like the PG-13-rated “Good in Bed,” which feels like a modern spiritual mash-up of Lily Allen’s “Smile” and Lauryn Hill’s “Doo Wop (That Thing).” But in tracks like “Boys Will Be Boys,” Lipa also serves up a particularly hearty stew of exasperation, tear-it-up feminism, burn-it-down politics and existential dread.

Sarah Hudson, a Los Angeles songwriter who worked with Lipa on “Levitating” and the album’s second single, “Physical,” a synth-heavy ode to a relationship’s honeymoon phase (and Olivia Newton- John), says her favourite thing about the artist is her ability to balance “having fun in the studio while also putting her all into her art. She is just a lovely, authentic, intelligent, stunning human. I could seriously go on forever about how much I love her!”

Lipa’s intention for Future Nostalgia was to create a sound that felt at once familiar and brand new, but to some, the title might also signify nostalgia for a sense of optimism about the future – like a reverse retro-futurism now that it’s clear that society is headed for a much more dire predicament than robot maids and jet packs.

There is an inherent sadness to much of Lipa’s music, but the beats are tailor-made for TikTok. And it’s hard to imagine anything coming closer to our collective near-constant state of cognitive dissonance than that particular combination. It’s Lipa’s signature – what she calls “dance-crying” music. And her authentic, unplanned, making-it- up-as-she-goes-along rollout has resonated in a big way. The day we spoke, her album reached the No. 1 spot in the U.K. Meanwhile, “Don’t Start Now” had already hit No. 2 on the Billboard Hot 100.

Mawson, Lipa’s manager, was not surprised by the album’s success and is confident that it will continue to sell well in the years to come. “The global pandemic certainly changed things, and we were limited in terms of the promotion we were able to do for the album,” he says. “But I was very proud of the way in which the team adapted and changed to put together the best release plan possible.”

Lipa’s SNL gig was cancelled, but she still got to perform “Don’t Start Now” with her bandmates and dancers in split screen on The Late Late Show and “Break My Heart” in a trippy green-screen projection on The Tonight Show. The latter felt particularly intimate – as she sang about the one- two punch of realizing you’ve fallen in love and then immediately worrying it will end badly, you could tell that Hadid, whom she had in mind while writing the song, was making her laugh.

For this entire virtual promo tour, Lipa’s done her own hair, makeup and styling, considering it “a small price to pay in the grand scheme of things.” Waving her hand over today’s ensemble, which includes an adorable Ashley Williams shirt with dog illustrations, Lipa admits that “this is probably the most ‘dressed’ [she’s] been.” She tells me that her current go-to outfit is “trackies and a hoodie.” “And I’m going to get into them once I’m finished with this video chat,” she says with a laugh. 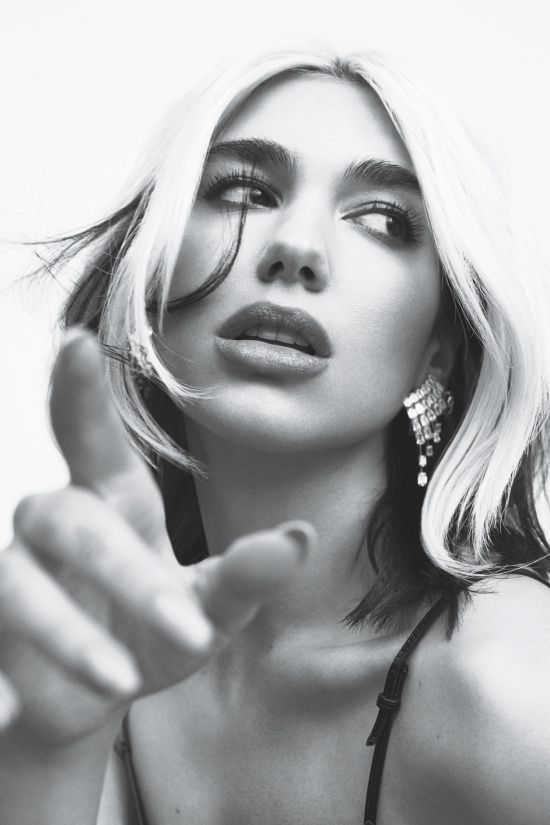 There’s absolutely nothing romantic about a pandemic, but it’s easy these days to get lost in imagining a favourite celeb couple’s cozy game nights or tracking their daily quarantine walks. It’s become an escapist tree branch to cling to in a seemingly never-ending anxiety cyclone. As for Lipa and Hadid, they’ve been doing essentially the same thing we all have. “Oh, my God, I’ve watched so many shows – Ozark, Tiger King, The Night Of, The Outsider, Servant. Did I say Ozark? And lots of movies too,” says Lipa. She and Hadid also recently cooked octopus, an impulse buy from a farm-to-table app. “We were just buying our normal fish and stuff and octopus came up,” she says. “So we said, ‘Okay, let’s try something different.’ It’s about making things fun, coming up with different recipes, trying out things that we’ve never done before.”

Which isn’t to say that the past several weeks haven’t been hard. “Of course, Anwar misses his family, and soon we’ll hopefully get to go back and see them,” she says. Until recently, the couple’s conversations revolved around when they’d be able to see each other in between Lipa’s upcoming tour dates. “But now that we’ve got all this extra time, we’re just making the most of it,” she says. “And that’s been really nice. We’re trying to see the bright side.”

Part of that optimism includes staying hopeful for what new insight might be gained from this period of global reflection. “I think things will definitely change,” she predicts of our post-pandemic existence. “I think we’ll tread differently with mother nature – we won’t be as careless as we have been. I think we’ll be more empathetic and make moments count. We won’t take things for granted. I think our world is probably going to change forever.” 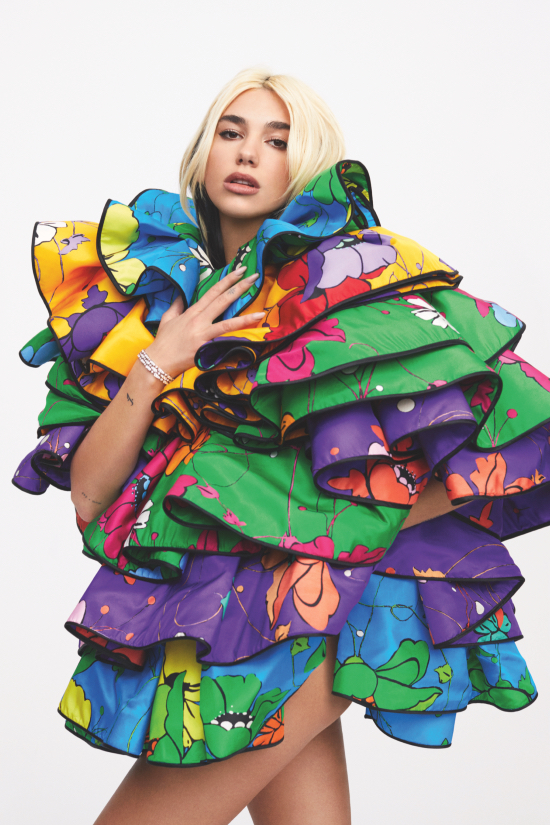 While the coronavirus might have hijacked the narrative of Future Nostalgia, Lipa’s not interested in carrying it along with her for the next album. “I don’t feel like we’ll want to be reminded too much of this time,” she says. “Of course, this is a major moment in history that we won’t forget. But I don’t know whether that’s going to influence where my music is going to go next.”

Like all Zoom video calls, the end of this one leaves me feeling a little electrified, a little depleted and longing for a return to normal human inter- action. But in the meantime, Lipa’s fans will continue hosting kitchen discos featuring her music. And eventually, some day in the probably distant future, there will be a real party with loads of people and flashing lights. But at that first party on the other side of all this, there’s going to be a moment when the DJ lets the needle drop on the bass-heavy groove of “Don’t Start Now.” Lipa’s crystalline voice singing “Did a full 180, crazy” will float from the speakers, confetti will fall and the crowd will go wild. 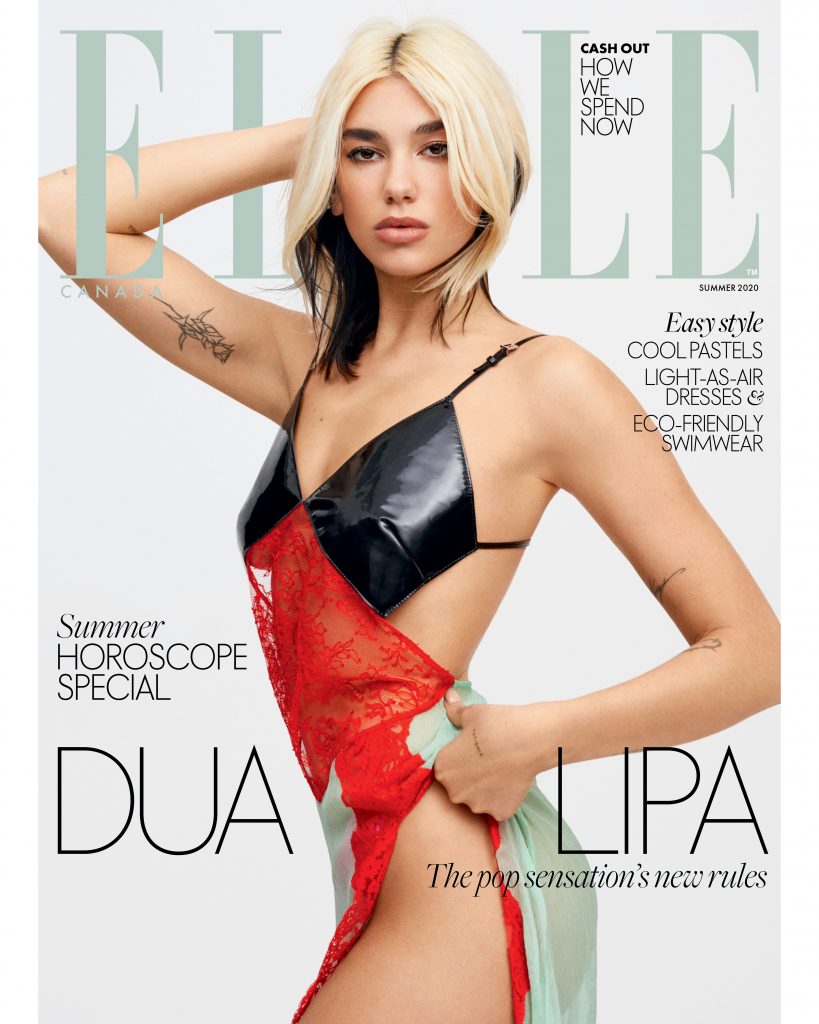