The must-have products from the world's best hairstylists 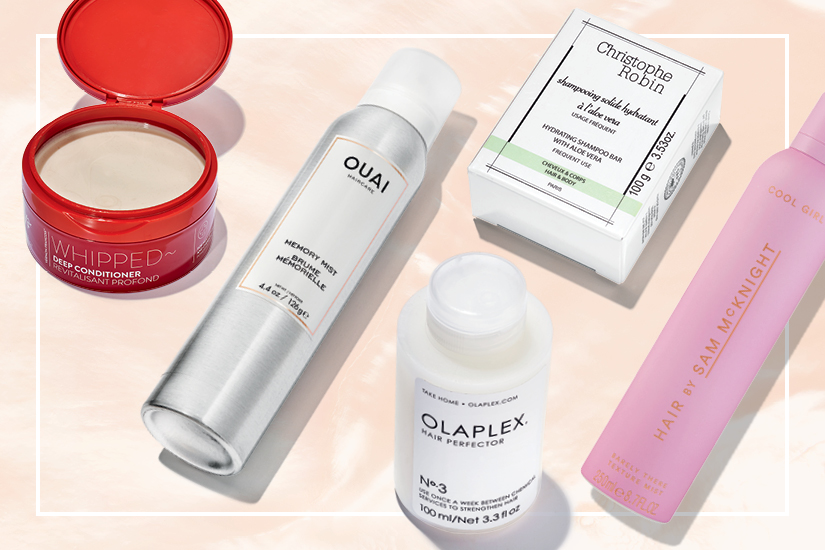 In the late 1970s, Sam McKnight was working at Molton Brown in the United Kingdom when he subbed for a sick colleague to style hair on a Vogue photo shoot. Hundreds of other shoots followed, but some of the Scotsman’s most memorable moments were during the seven years he spent globe-trotting as part of Princess Diana’s royal entourage. The boy-short crop McKnight created for her 1991 Vogue cover had a ripple effect around the world. Images of that iconic style, and more, were on display earlier this year at London’s Somerset House and appear in a commemorative book celebrating the hairdresser’s four decades in the fashion industry.

The pro stylist is a fixture backstage at Chanel every season and the hands behind the hair in campaigns such as Fendi, Balmain and Chanel. McKnight has introduced his own range, starting with four dry-styling products designed for quick and easy at-home use (one for updos, one for Kate Moss waves, one for no-wash refreshment and a “modern hairspray”). His book, Hair by Sam McKnight, and his Instagram #throwbacks have also brought the hair artist closer to the people. “You might post a [photo of a] woman with long grey hair that encourages other older women to feel like they don’t have to have short hair,” says McKnight. “It’s made me realize how much power hair has over you—but also how much power you can have over it.”

Tracey Cunningham has kept celebs like Gwyneth Paltrow, Drew Barrymore and Jennifer Lopez coming back for her signature sun-kissed highlights for over two decades: first at her L.A. salon, Mèche, and now at her new VIP hair atelier, tucked inside the Waldorf Astoria in Beverly Hills. Cunningham was inspired by the intimate powder rooms she visits during A-list house calls; her salon features a private elevator that leads to just a few chairs in art-deco surrounds, a nod to Old Hollywood, and has a view of the Hills. Not real life, no. But Cunningham’s brand of classic beauty could land at a salon in your own ’hood. In her off-hours, the Olaplex ambassador and Redken consultant mentors junior colourists via Web tutorials and in-person seminars about her you-at-your-best technique. Cunningham visited Toronto this summer to train several local stylists, making stops at haute spots such as Lac + Co and East Room. That’s why you won’t find blorange, unicorn or rainbow how-tos in the curriculum. “I love seeing it, but it isn’t me,” says Cunningham. “A truly unique, natural and healthy look—that’s my approach. Keepin’ it real.”

Growing up in Northern England, and long before his days of creating behind-the-scenes dance videos with client-friend Lupita Nyong’o on Instagram, Vernon François used to practise making twists and braids on a blue-eyed, blond doll he named Shaniqua. Thankfully, the self-taught stylist graduated from dolls to putting his brother’s hair in locs, and the bond helped form François’ natural-hair crusade. After creating Nyong’o’s sculptural hair tower for the 2016 Met Gala red carpet, he started getting emails from women almost daily. “People are telling their stories, saying ‘I just want to thank you [for telling me] it’s okay for me to wear my natural hair.’” Last year, François answered the call of his underserved clients and launched an eponymous range especially for ’fros and curls, including a groundbreaking lightweight conditioning in-shower spray.

Now François is releasing his follow-up collection, which will include new products to style a wide range of textures, including curly, coily, kinky and wavy as well as loc’ed. He recently launched a YouTube channel to talk more directly about society’s expectations with regard to curly hair; consider it #hairspo for the mind. “I’m in this position to potentially change the beauty industry and allow men and women to look within and embrace their true texture,” says François. “That’s all I’ve ever wanted.”

Christophe Robin began his career apprenticing at age 15; by 18, he was painting highlights on model Stephanie Seymour for his first L’Oréal campaign; and by 24, he had opened the first salon in Paris dedicated solely to hair colour. After the supermodels, cinema stars came calling. (Actress Catherine Deneuve still visits his romantic rue Bachaumont locale.) Last spring, Robin transplanted some of his parlour’s antique pieces to Manhattan for a pop-up designed to immerse (literally—there were sinks) New Yorkers in his salon experience. The free event was just one example of how Robin is keeping up with (or ahead of) the times.

Passersby got a chance to try the Christophe Robin Rassoul Cleansing Volumizing Paste, a clay-to-foam shampoo that de-clogs roots. Since 1999, his namesake range has been developed in a skincare lab to target sensitized scalps, and it continues to innovate with smallbatch formulations. This month, an aloe vera hydrating collection will challenge hair-washing convention with a 100-percent-natural solid shampoo bar. “It won’t give the same shine as a traditional shampoo would,” warns Robin. “But once your hair is used to this new way of cleansing [after up to five washes], it will look noticeably healthier and be stronger.”

There’s more to Jen Atkin’s story than being the Kardashians’ beloved hairdresser. A rare female role model in a male dominated industry, the stylist launched maneaddicts.com, a website for fellow hair pros, in 2014. “When I get DMs or snaps from budding hairstylists telling me I helped to push them along in their journeys, it feels so good,” she says. “I wanted to create a platform that I wish had existed when I first started out—a space for hairstylists to learn about new products and for consumers to learn about hairstylists and a platform to help teach new artists the tricks we veterans learned onset and backstage.”

In 2016, Atkin launched her own hair line, Ouai, after years of “prescribing” health-food-store supplements to address her clients’ hair and scalp issues and because she felt that most hair products were too overwrought with marketing to be useful. The result—with its biotin pills to combat thinning, dry and oily hair; an award-winning dry shampoo foam; and how-to videos where models actually do their hair themselves—is a company that perfectly exemplifies today’s digital-native vertical-brand movement. Helping real women reach peak good hair themselves is at the core.