Beauty spotlight: Is YSL's new foundation the next Touche Éclat?

YSL’s new foundation is the next step in the Touche Éclat world takeover. 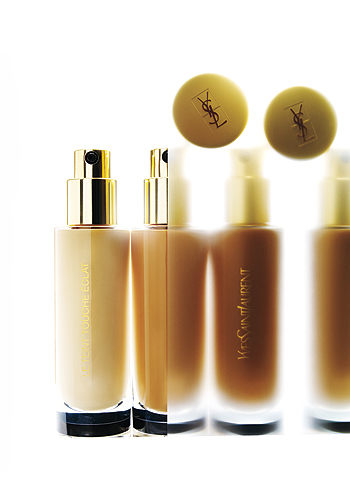 It’s mid-morning in a glassed-in courtyard in the historic Marais district of Paris, and the Yves Saint Laurent marketing team’s sylph­like marketing reps—willowy and faultlessly soignée—are fanned out across the room’s limestone expanse. Each is wearing one or more items of YSL finery, including the silk safari dress, a 1968 creation that still looks fresh today. On practically every hand, one sees YSL’s signature gold rings with their chunky trademark stones. To underscore the morning’s well-orchestrated brand imprinting, all teeter elegantly on the iconic sky-high Tribute platform heels.

The Touche Éclat highlighter pen, another talismanic “jewel” of the YSL repertoire, is the focus of today’s gathering. The highlighter, which magically erases signs of fatigue, softens wrinkles and is a staple in every chic woman’s makeup bag, has been spun off into a
foundation. More on that in a minute.

Used by stars from Salma Hayek to Demi Moore and still selling at a global rate of one every 10 seconds, Touche Éclat, even at the venerable age of 20, is the beauty icon that ticks all the boxes. It performs its difficult yet critical tasks of
brightening complexions and banishing fine lines while simultaneously acting as a very covetable object. (In print ads, Jourdan Dunn and Ginta Lapina wield their gold Touche Éclat stylos as though they’re holding cigarettes.) And its success has inspired countless knockoffs, so many of which fail to make the grade. Some cheap imitators miss the mark completely and are just liquid concealers in sad white plastic cases—no luminosity, no magic. “Touche Éclat doesn’t cover; it illuminates,” says Lloyd Simmonds, creative director of makeup for YSL. “Wherever you want a bit of a lift, it gives a little light.”

For any woman who has joked that she would happily cover her entire face with Touche Éclat the morning after a late night, the idea of a companion foundation is surely the beauty world’s version of catnip. The YSL team thought so too. “Touche Éclat is the number one concealer worldwide,” notes Isabella Weinstabel, inter­national marketing director for YSL Beauté. In other words, spinning the brand off into a foundation is what the French might call a case of n’hésitez pas (no-brainer).

The global foundation market makes for a juicy prize indeed: According to market analyst Euromonitor, it’s worth US$12.643 billion annually. And it’s a pot that’s only growing in size, thanks to burgeoning economies in the so-called BRIC (Brazil, Russia, India and China) countries, which are considered the next frontier for expansion-minded retailers. The three-year project began with a skin-tone survey of 7,000 women worldwide; a global range of colours was essential if the company was going to challenge the world’s
top-selling foundations (a cluster that currently includes Shiseido, Kanebo, Clinique, Lancôme Paris and Estée Lauder).

But foundation is tricky, and creating one that can legit¬imately be called Le Teint Touche Éclat was no small feat. The foundation customer wants it all. It’s a tendency that Caroline Nègre, international scientific manager for YSL Beauté, charmingly describes, with a Gallic shrug, as a “paradox.” Women, she says, “want both a perfect complexion and something sheer and subtle.” The goal, then, was to create a product that can “embellish without masking the expressivity of the face.”

Translating the Touche Éclat “light” into a foundation required jettisoning many traditional ingredients. Gone is the alcohol, which dries out skin; it was replaced with boosted water and
oil to keep skin dewy. Also sent packing were opaque fillers and mother-of-pearl pigments in favour of sheer proprietary ingredients: soft-focus gel and “fluid light concentrate”—a suspension of gold micro¬particles to evenly reflect light. The result is a line of 16 shades (down from 22 in Europe) of transparent colour for luminous skin without that sparkly “disco-ball effect.” And the lighter formulation with no mother-of-pearl means that shades at the darker end of the range will have that signature Touche Éclat glow without an ashy cast.

Le Teint Touche Éclat also manages to be both sheer and buildable (makeup-artist speak for “you can apply more for increased coverage without it getting goopy”). Still, Simmonds is of the less-is-more school: “I encourage people to use foundation just where you need it and only when you need it. Because otherwise, why? You don’t need it.” The result is what he calls a “dewy luminosity.”

Throw in some YSL hauteur and a pair of Tributes and isn’t that what we all want?

Combat wrinkles with these products!