Long distance love: Can it survive on Skype alone?

How one couple living on opposite coasts sustained a relationship with 73-hour video-chats. 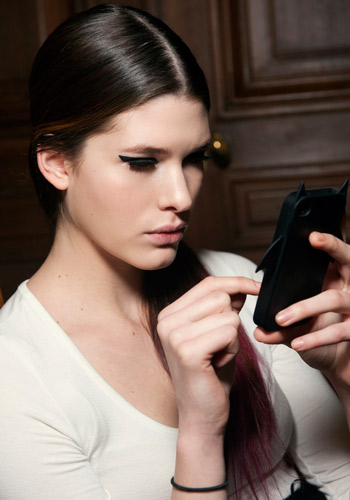 We don’t choose who we fall in love with. And in the first flight of connection, when the mere idea of a cooler head is often an unwelcome concept, logic takes a back seat to passion.

When Athena and I first got together, we floated blithely past any warnings, barely registering the red flags in our path. But the fact that we were both just out of our respective marriages was a relatively minor concern when compared to the largest looming obstacle: distance – more than 3,000 kilometres, as the crow flies.

We met when I was in Toronto for the Giller Prize gala. I lived (and still do) in Victoria.

I grew up, as many did, being cautioned about the impossibility of long-distance relationships. One of the first girls I went out with lived a gasp-worthy half-hour away. That relationship ended after a few weeks, and not well.

When I was preparing to go off to university, my then girlfriend and I decided to ignore counsel from family and friends and keep up our relationship when I moved to Victoria and she to Edmonton. That relationship ended after a couple of months. Also not well.

So either Athena and I were crazy (about each other, yes, but also just plain crazy) or the third time would be the charm. Besides, we weren’t alone: There were three other long-distance relationships in our social circle, each with one partner in Toronto and the other in St. John’s, Ottawa or California. Maybe it’s something about Toronto. More likely, though, it’s something about our culture.

We constantly hear about how the Internet has made the world a “global village”; in fact, it often seems like the entire world has become our dating pool. It’s the new old story that our friends all seem to share: You meet someone in a distant city while travelling for work, you think it’s going to be a casual fling and before you know it you’re falling in love.

So, like our long-distance peers, Athena and I created a life within the gap, a virtual domesticity that quickly became our routine. Emails and online chats were constant companions. And there were phone calls, of course, although they felt a little old school compared to the wonder of Skype and Facetime. (Thankfully, the technologies that foster the creation of long-distance relationships also help support them.)

READ MORE: 7 Tinder dos and don’ts you need to know

We got used to the three-hour time difference, living in two time zones simultaneously. By the time I got home from work, she’d be back from yoga or an outing with the girls, and we’d log on and spend the evening together. A moderately early dinner for me was a moderately late dinner for her – hardly an imposition for either of us. We’d catch up as we cooked, we’d hang out while we ate. We watched TV together and talked about the news. We’d set up our tablets next to our computers and share our favourite songs back and forth with YouTube links: It wasn’t quite sharing a set of earbuds, but it worked. Not surprisingly, Lissie’s cover of the Pretenders’ “2,000 Miles” became an anthem for us.

Friday nights were date nights: We’d have a couple of drinks and watch a movie, carefully syncing our starts and muting our respective iPad mics to avoid soundtrack clashes. We lived together online, 3,000 kilometres apart. We’d work and read. Write and run errands. Cook and clean. Eat and sleep. (I am still rattled when a video call with Athena’s relatives lasts only 10 or 15 minutes, but I suppose that 73-hour Skype calls probably aren’t the norm.)

READ MORE: How to be happy this year

More than anything, though, we’d talk. Those online days, we talked about everything: histories, families, hopes, fears, secrets and regrets. We had our first fights on Skype and learned how to make up. We got to know each other not despite the distance but because of it. And we discovered that not only were we in love but we actually liked each other.

The two, so often, don’t go together.

One of the hitches with long-distance relationships is that the finite contact can perpetuate a hormonal honeymoon phase, allowing for the evasion of life’s realities. We avoided this pitfall by building an existence together in the only way we could. We shared our best and our worst: new book deals and magazine cover stories, work stress and anxiety attacks.

But that virtual togetherness only goes so far. We missed major occasions in each other’s lives because we couldn’t make the logistics work, no matter how hard we tried. We missed the small intimacies of shared space, of touching. We missed each other.

We would see each other whenever we possibly could, scheduling long weekends and vacations or searching for cheap flights and meeting in random cities like Portland or St. John’s, just for a chance to be together. “The distance forced us to make our time together count,” explains one of our peers. “There wasn’t time for bullshit or withholding games.” (Real life is like Skype, with benefits.)

We lived for those visits. Nothing rivalled the feeling of walking through an airport knowing that the person you loved and hadn’t seen in months was waiting just a few moving sidewalks away.

There was also nothing like the awareness that came before breakfast on the last day of a visit, when our time together was measured in hours instead of days. We went to superhuman lengths to push down the pain of imminent departure, but the joy of being in each other’s presence was still blurred with the anticipatory heartbreak of parting.

I don’t miss those last days.

Athena got a job in Victoria two years ago, and we’ve lived together since the moment she arrived. It was life changing but familiar: After all, in a way, we’d been living together for almost two years already. Sure, her innate tidiness chafes against my lifelong slobbiness at times, but that seems a small price to pay for the blessing of actually being together.

I’m glad our long-distance days are over, but I wouldn’t want our relationship to have developed in any other way. The benefits of the life we built together, 3,000 kilometres apart, make those hardships worthwhile: We don’t take actually being with each other for granted. Every day feels like a gift, even if mornings are a little rougher in person than they were online and even if, in the real world, she can’t just mute my snoring.

Besides, I still get a rush of nervous joy whenever I hear a Skype call ringing.

READ MORE:
Why a fashion girl can also be a feminist
How one woman discovered the power of female friendships
Meghan Trainor is nobody’s poster girl